Dollar continues to trade mixed in early US session. Negative effect of ADP job data is more than offset by stronger than expected Q3 GDP growth. The greenback will now look into FOMC rate decision for guidance. The key is whether Fed will signal the end of mid-cycle adjustment after today’s rate cut. Before that, Canadian Dollar will look into BoC rate decision due within an hour.

For the week so far, Yen is the weakest one, followed by Canadian and then New Zealand Dollar. Australian Dollar is the strongest, followed by Sterling. Technically, though, AUD/USD is staying below 0.6894 resistance and near term outlook remains bearish. AUD/JPY breached 74.82 resistance to 74.84 but cannot sustain above there yet. We’re not totally convinced by Aussie’s strength for now.

Here are some suggested readings on Fed and BoC:

Looking at some details, GDP growth reflected positive contributions from personal consumption expenditures (PCE), federal government spending, residential fixed investment, state and local government spending, and exports. The were partly offset by negative contribution from nonresidential fixed investment and private inventory investment. Imports, which are a subtraction in the calculation of GDP, increased.

US ADP jobs grew 125k, slowdown most pronounced at manufacturers and small companies

“While job growth continues to soften, there are certain segments of the labor market that remain strong,” said Ahu Yildirmaz, vice president and co-head of the ADP Research Institute. “The goods producing sector showed weakness; however, the healthcare industry and midsized companies had solid gains.”

Mark Zandi, chief economist of Moody’s Analytics, said, “Job growth has throttled way back over the past year. The job slowdown is most pronounced at manufacturers and small companies. If hiring weakens any further, unemployment will begin to rise.”

Swiss KOF rose to 94.7, but stays below long term average

Swiss KOF Economic Barometer rose to 94.7 in October, up from 93.2, and beat expectation of 94.2. The index halted its downward movement, “at least for the time being”, but it’s still well below its long term average.

KOF said the increase is “attributable in particular to bundles of indicators from the banking and insurance sector as well as from accommodation and food service activities”. Also, “indicators regarding foreign demand and other services are pointing in a slightly less negative direction”. But “indicators from the manufacturing sector record a slight decline.”

ABS Chief Economist, Bruce Hockman said: “Annual inflation remains subdued partly due to price rises for housing related expenses remaining low, and in some cases falling in annual terms. Prices for utilities (-0.3 per cent) and new dwelling purchase by owner-occupiers (-0.1 per cent) both fell slightly through the year to the September 2019 quarter, while rents (0.4 per cent) recorded only a small rise”.

Westpac said that there was some AUD depreciation pass-through to inflation but there is no broader impact of wider inflationary pulse. There is little pressure on the RBA to cut again this year. And Westpac maintains the forecast of another cut in February 2020. 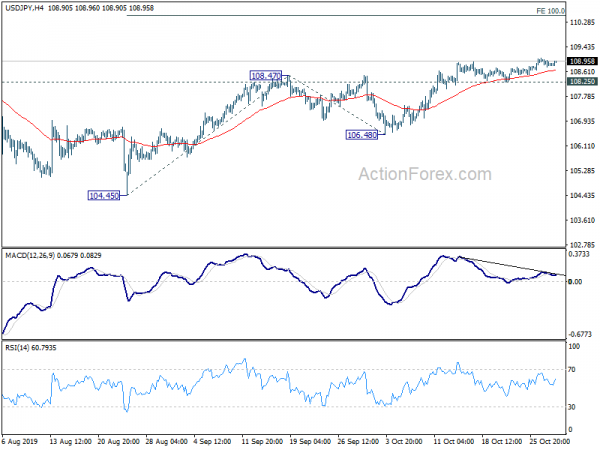 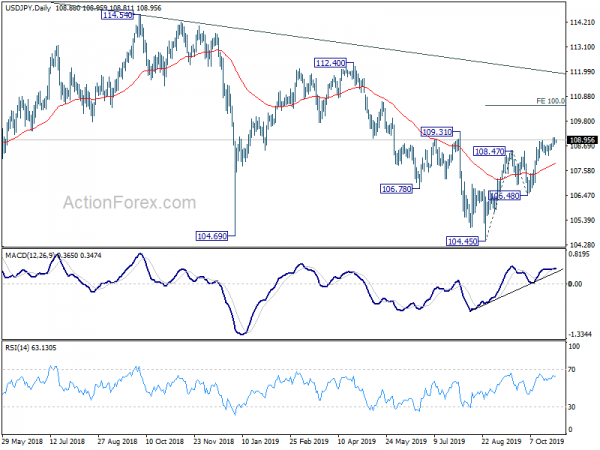