Yen rises notably today as focuses turn back to US-China trade negotiations after central bank activities and economic data releases. There are renewed concerns that even if a phase one deal could be reached, the next phase(s) would be very difficult. Dollar remains generally soft and is currently trading as the weakest for today. Below target inflation reading provide no support to the greenback, as it’s weighed down by post FOMC selloff. Canadian Dollar is also soft after worse than expected GDP data. European majors are generally mixed.

Technically, USD/JPY’s break of 108.25 minor support suggests rejection by 109.31 resistance. More importantly, recent rebound from 104.45 could merely be a correction. break of 106.48 support will reaffirm medium term bearishness and target 104.45 low again. EUR/USD has yet to break through 1.1179 resistance despite yesterday’s rebound. This will remain a focus before weekly close. Break will confirm resume recent rise from 1.0879.

Risk sentiments appear to be weighed down by a Bloomberg report that indicated uncertainties over a comprehensive US-China trade deal. Unnamed Chinese officials was said have warned that “they won’t budge on the thorniest issues” regarding trade negotiations. Some officials have “relayed low expectations” on future negotiations unless US would roll back more of the imposed tariffs.

For now, US and China are still on track to complete the phase one of the trade deal based on original time frame, even though the APEC summit in Chile is cancelled due to social unrest. The phase one would cover intellectual property protections, currency, financial services and agricultural purchases. But both sides are said to recognize the difficulties for negotiations beyond that.

To our understanding, the most difficult part would be on subsidies on state-owned enterprises. US would insist on China to reduce the subsidies. But it’s a fundamental principle of the state capitalism model of China that the Chinese Communist Party wouldn’t give up. It’s the key difference between China and Westerns countries which made them systematic rivals, as many described.

US initial jobless claims rose to 218k above expectation of 215k

Canada GDP rose 0.1% mom in August, below expectations of 0.2% mom. Goods-producing industries were up 0.2% after two months of declines, led by a rebound in manufacturing, while services-producing industries edged up 0.1%. Overall, there were gains in 14 out of 20 industrial sectors. On a three-month rolling average basis, real gross domestic product rose 0.5% in August, compared with a 0.8% increase in July.

ECB Vice President Luis de Guindos warned that the “collateral effects” of the ultra-loose monetary policy are “increasingly significant”. Hence, monetary policy “can’t be the only response to the economic slowdown” in the Eurozone. He added, “monetary policy can provide liquidity in the case of the risk of Brexit or trade wars, but it’s not the solution to these issues, which are the factors behind the slowdown”. He emphasized, “we can alleviate the situation but we can’t resolve it.”

De Guindos also added that “I wouldn’t say that monetary policy has in any way reached its limits, but I would say that the negative impact on financial stability is increasingly evident, which means it needs to be complemented with fiscal policy.” the advantage of negative rates is that “it has boosted investment, consumption and that’s behind the recovery”. But on the negative side, some real estate markets in Europe are of overly buoyant valuations of assets, and banks’ earnings have also taken a hit.

Australian Dollar surges broadly today firstly with the help from post FOMC selloff in Dollar. In the background, Aussie has been riding on optimism towards US-China trade negotiations recently. The strong housing data today also eased concerns of a renewed downturn in the housing markets. Building permits rose 7.6% mom in September, way above expectations of 0.1% mom. Other data, while missed, were not disastrous. Private sector credit rose 0.2% mom in September versus expectation of 0.3% mom. Import price index rose 0.4% qoq in Q3 versus expectation of 0.5% qoq.

BoJ left monetary policy unchanged today as widely expected, but stepped up its signal for more easing ahead. Under the yield curve control framework, short term policy interest rate was held at -0.1%. Also, the central back will continue to increase monetary base at JPY 80T a year, with purchases of JGB to keep 10-year yield at around 0%. The decision was made by 7-2 vote, with Y. Harada and G. Kataoka dissenting as usual.

The forward guidance was changed to: “As for the policy rates, the Bank expects short- and long-term interest rates to remain at their present or lower levels as long as it is necessary to pay close attention to the possibility that the momentum toward achieving the price stability target will be lost.” Previously, BoJ said its  committed to keep “current ultra-low rates for an extended period of time, at least until the spring of 2020.” It’s a clear message that BoJ is ready to cut interest rates again any time if outlook deteriorates further.

At the post meeting press conference, Governor Haruhiko Kuroda confirmed that the new forward guidance aimed at clarifying the stance that “policy bias is leaning towards additional monetary easing.” Regarding the tools, BoJ could “cut interest rates, increase asset buying or accelerate the pace of increase in base money”.

USD/JPY’s break of 108.25 minor support suggests that a short term top is formed at 109.28, ahead of 109.31 key resistance, on bearish divergence condition. Intraday bias is turned back to the downside for 106.48 support first. Break there will confirm completion of rebound from 104.45 and bring retest of this low. For now, risk will stay on the downside as long as 109.28/31 holds, in case of recovery. However, decisive break of 109.31 will be an early sign of medium term reversal and target 112.40 resistance next. 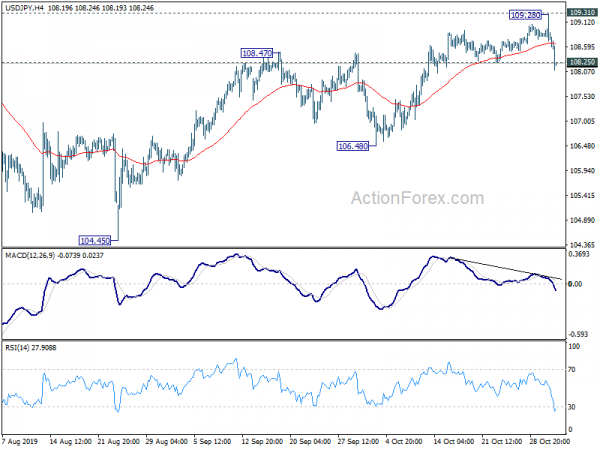 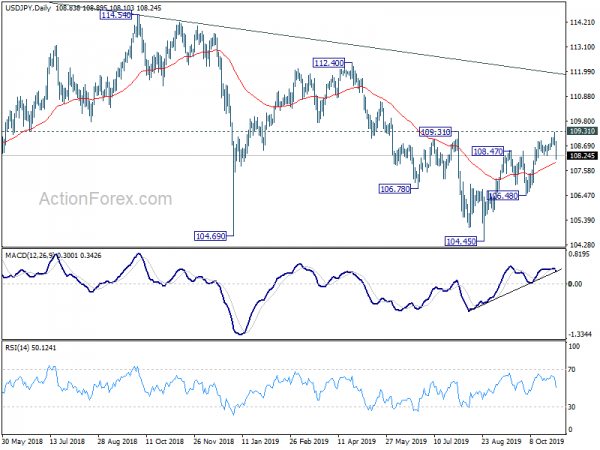