Strong risk appetite dominates Asian session today, partly as follow through buying from US, and partly on trade optimism. Commodity currencies are trading generally higher, as led by New Zealand Dollar rand then Australian. On the other hand, Swiss Franc and Yen are the weakest ones for now. Dollar and Euro are mixed.

Technically, though, AUD/USD is staying in consolidation below 0.8929 temporary top. EUR/JPY and GBP/JPY are also bounded in consolidation from 121.46 and 141.50 respectively. There is no upside breakout in these risk pairs yet. 0.9841 support in USD/CHF is something to watch today. Break will complete a head-and-shoulder top pattern and indicates near term bearish reversal. However, rebound from there would retain bullishness for another higher above 1.0027.

US Commerce Secretary Wilbur Ross said on Sunday that the trade agreement with China was “particularly complicated” and  the US was “making sure that each side has a very correct and clear, detailed understanding of what each side has agreed to.” Though, he added that “we’re in good shape, we’re making good progress, and there’s no natural reason why it couldn’t be.”

Also, Ross said the licenses for American companies to export certain technology products to China’s Huawei “will be forthcoming very shortly”. The government received 260 requests and “it’s frankly more than we would’ve thought”. But he added, “remember too with entity lists there’s a presumption of denial. So the safe thing for these companies would be to assume denial, even though we will obviously approve quite a few of them.”

On auto tariffs, Ross said “we have had very good conversations with our European friends, with our Japanese friends, with our Korean friends, and those are the major auto producing sectors”. “Our hope is that the negotiations we have been having with individual companies about their capital investment plans will bear enough fruit that it may not be necessary to put the 232 (tariffs) fully into effect, may not even be necessary to put it partly in effect.”

Australia retail sales rose 0.2% mom in September, below expectation of 0.4% mom. Ben James, Director of Quarterly Economy Wide Surveys, said there was “mix of results at the industry level”.

Rises were seen in other retailing (0.8%), cafes, restaurants and takeaway services (0.6%), and food retailing (0.1%). These rises were slightly offset by a fall in clothing, footwear and personal accessory retailing (-0.5%) and department stores (-0.2%). Household goods (0.0%) was relatively unchanged.

Overall the report suggested weak consumer spending through Q3 and there was little lift from tax refunds. Some greater fiscal stimulus would be needed to boost wage growth and spending. And without that, another RBA cut early next year would be likely and necessary.

New Zealand Treasury said in its monthly report that economic growth was “weaker than forecast” in the June quarter. Business activity “remained weak” in the September quarter and is expected to have weighed on domestic growth. Inflation was “stronger than expected” but a “slowing economy poses downside risk to forecasts”.

Treasury also said the nominal neutral interest rate (NIR) has been falling over time in many developed nations, including New Zealand. It revised down the terminal nominal NIR assumption from 3.75% to 3.0%. And, “a lower NIR assumption implies low interest rates have less stimulatory power than previously assumed”.

Two central banks will be this week, RBA and BoE. Both are expected to stand pat and focuses will be on their new economic projections. Markets have been paring bets on RBA rate cuts since the past two weeks. RBA’s forecasts could leave some clues on the chance of a cut next year. Meanwhile, some BoE officials have raised the idea that the central bank will need a rate cut ahead even in case of smooth Brexit. Such idea might be reflected in the new forecasts. 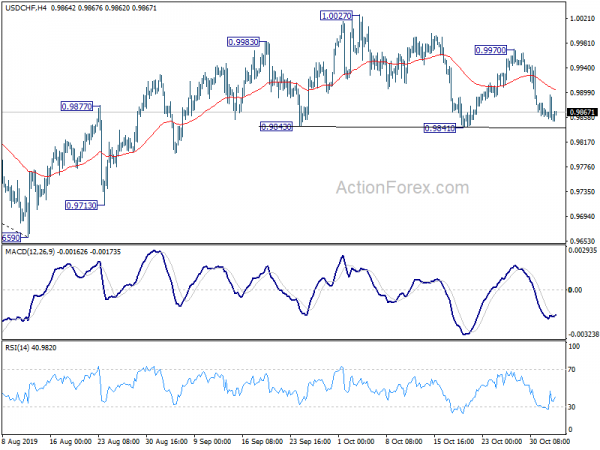 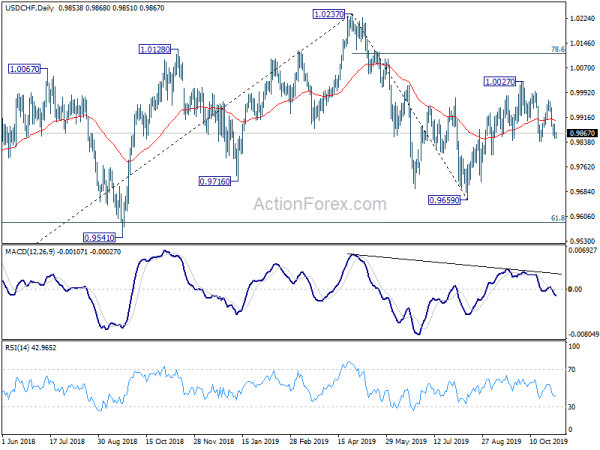