Sterling rises sharply overnight and stays firm in Asian session today. The Pound was lifted by improved chance for Conservative win in the upcoming election. Yet, there is no sign of a clear majority for pushing through the Brexit deal. Thus, upside of the Pound is so far limited. Currently, Australian Dollar is the strongest one for today as Asian markets recover. Euro is the third strongest. New Zealand Dollar is the weakest one as markets are firming up expectation for an RBNZ rate cut tomorrow. Yen is the second weakest.

Technically, EUR/GBP’s breach of 0.8575 suggests decline resumption. Current fall from 0.9324 should target 0.8472 key support zone. However, GBP/USD is staying in consolidation below 1.3012. GBP/JPY is also bounded in range below 141.50. These two pairs could extend recent sideway trading first. EUR/CHF’s break of 1.0974 support suggests that recent consolidation from 1.0811 has completed. Deeper fall could be seen back to retest this low.

Sterling is holding on to yesterday’s strong gain today and remains the strongest one for the week. The Pound was lifted overnight after Brexit Partly leader Nigel Farage surprisingly announced not to filed any candidate to compete for the 317 seats held by the Conservatives. The decision came after Prime Minister Boris Johnson pledged to take UK out of the EU by 2020 and to pursue a Canada-style trade deal.

Farage added “I have got no great love for the Conservative party at all, but I can see right now that by giving Boris half a chance … and stopping the fanatics in the Liberal Democrats – they even want to revoke the result of the referendum – I think our action, our announcement today, prevents a second referendum from happening.”

Reuters reported that US President Donald Trump could announce this week to delay the decision on Section 232 national security tariffs on EU autos by another six months. An unnamed EU official was quoted, “We have a solid indication from the administration that there will not be tariffs on us this week”.

The news is in-line with recent comments from US Commerce Secretary Wilbur Ross, who indicated that such tariffs might not be necessary after “good conversations”. It’s also believed that US Trade Representative Robert Lighthizer and EU Trade Commissioner Cecilia Malmstrom have spoken often in recent weeks, with “positive” tone.

Australia NAB Business Confidence rose from 0 to 2 in October. Business Conditions also rose from 2 to 3. NAB said “this month’s survey results continue to point to only modest outcomes in the business sector, though forward-looking indicators have improved slightly and may be pointing to a stabilisation in conditions.” Also, “acknowledging that the impact of recent rate cuts will take time to flow through the economy, it appears that the support provided by both fiscal and monetary policy this year has done little to offset the slowdown in the business sector.”

Alan Oster, NAB Group Chief Economist, also said: “The business sector has lost significant momentum over the past year or so, putting at risk the optimism around business investment and possibly employment going forward. Overall, we see this as a demand driven issue with private sector demand the weakest since the GFC. It may well be the case that the economy needs further stimulus in addition to the monetary and fiscal support provided so far to support demand and see a lift in business activity and confidence”.

The release solidify the case for another RBNZ rate cut to 0.75% tomorrow. The key now is whether RBNZ would give any indication of easing bias, even after the cut. In particular, traders would look for phrase like “there is scope for further fiscal and monetary easing if necessary.”

UK employment data and German ZEW economic sentiment will be the major focus today. US economic calendar continues to be very light. Attention will be on President Donald Trump’s speech on trade policy at the Economic Club of New York. 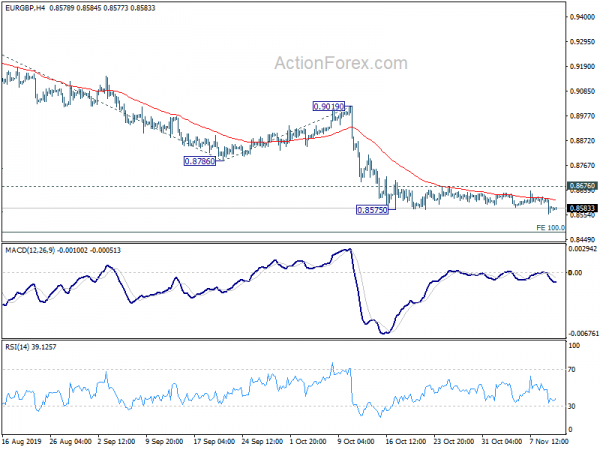 In the bigger picture, we’re now seeing 0.9324 as a medium term top on bearish divergence condition in weekly MACD. Price actions from there should develop into a corrective pattern. Deeper fall should be seen back to 38.2% retracement of 0.6935 to 0.9324 at 0.8411 but strong support should be seen there, at least on first attempt, to bring rebound. On the upside, break of 0.9324 is needed to confirm up trend resumption. Otherwise, risk will stay on the downside even in case of strong rebound. 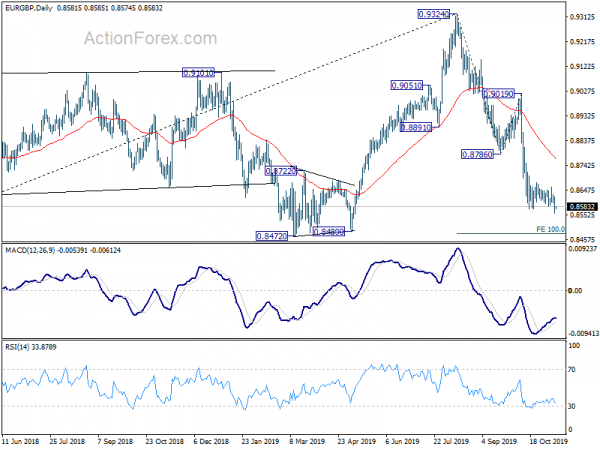