Australian Dollar weakens broadly today following more dovish than expected RBA minutes. New Zealand Dollar is currently the second weakest together with Swiss Franc. On the other hand, Euro, Sterling and Yen are the stronger ones. Dollar is mixed on confusing messages regarding US-China trade deal. So far, it seems like the US is relatively upbeat while some Chinese officials are pessimistic.

Trump had cordial meeting with Fed Powell, and protested on high interest rates

Fed Chair Jerome Powell had a meeting with US President Donald Trump at the White House yesterday, together with Treasury Secretary Steven Mnuchin. Fed said in a statement that the meeting was to “discuss the economy, growth, employment and inflation.”. Powell’s comments were “consistent” with his remarks at the Congressional hearing last week. And he “did not discuss the economy, growth, employment and inflation.”

Trump said in twitter that the meeting was “very good & cordial”. “Everything was discussed including interest rates, negative interest, low inflation, easing, Dollar strength & its effect on manufacturing, trade with China, E.U. & others, etc.” He also “protested” that Fed’s interest rate is “too high relative to the interest rates of other competitor countries”. And, “our rates should be lower than all others (we are the U.S.). Too strong a Dollar hurting manufacturers & growth!”

BoJ Governor Haruhiko Kuroda said in the semi-annual parliament testimony that “there is plenty of scope to deepen negative rates from the current -0.1%.” However, he emphasized “I’ve never said there are no limits to how much we can deepen negative rates, or that we have unlimited means to ease policy.”

Kuroda also reiterated that “Japan’s economy is expected to continue expanding and inflation will gradually head towards our 2% target”. And, “we need to remain vigilant to downside risks, particularly those regarding the global economy.”  He also noted that “the effect of China’s policy measures is taking somewhat long to appear. But China’s economy will likely sustain growth of around 6% for the time being.”

Australian Dollar stays generally pressured today as RBA’s November meeting minutes struck a more dovish than expected tone. Board members noted that “a case could be made to ease monetary policy”. They refrained from easing further this month because of the concerns about “the negative effects of lower interest rates on savers and confidence”. They, however, retained the view that lower interest rates could support economic growth via traditional channels, such as “a lower exchange rate, higher asset prices and higher cash flows for borrowers.

EUR/AUD’s rise from 1.5976 resumed after brief consolidation and intraday bias is back on the upside. Further rally should be seen to 1.6432 resistance first. Sustained break there will pave the way to retest 1.6786 high. On the downside, below 1.6202 minor support will turn bias back to the downside for 1.5894/5905 key support zone instead. 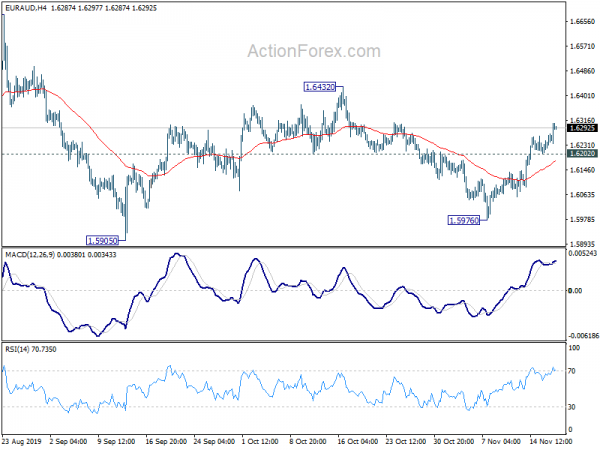 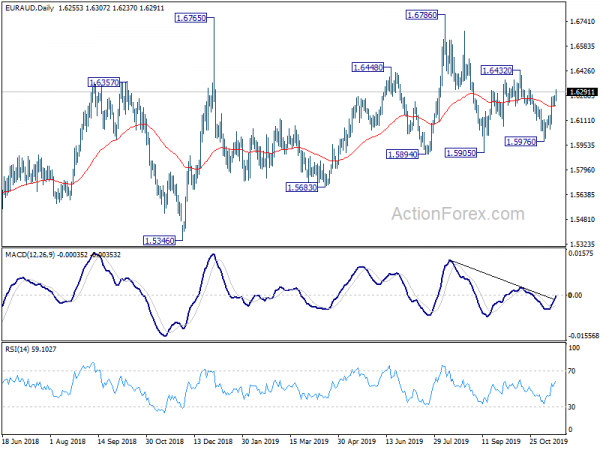