Sentiments in the markets were lifted by news that China is going to step up credit support to the economy. Commodity currencies strike a strong come back, as led by New Zealand and Australian Dollar. On the other hand, Swiss Franc and Yen are back under pressure. Sterling also continues to pare back some gains as traders hesitate to push it through near term resistance level against Dollar and Yen. The greenback is mixed for the moment, as housing data provide little inspiration.

Technically, bias is GBP/USD and GBP/JPY is turned neutral after they fail to take out 1.3012 and 141.50 resistance levels decisively. Though, further rise remains in favor and these two level will stay in focus. AUD/USD’s recovery from 0.6769 extends higher today but it’s limited below 0.6841 minor resistance so far. Thus, further decline remain in favor to 0.6670 low. Though, break of 0.6841 will turn focus back to 0.6929 resistance instead.

UK CBI industrial order expectations improved to -26 in November, up from -37 and beat expectation of -30. 13% of manufacturers reported total order books to be above normal, but 40$ said they were below, giving a rounded balance of -26%. It remains well below long-run average of -13%.

Anna Leach, CBI Deputy Chief Economist, said: “While the thick fog of uncertainty from a No Deal Brexit has lifted somewhat, the manufacturing sector remains under pressure from weak global trade and a subdued domestic economy. Order books remain below average, and output volumes continue to fall. When taking into account the deteriorating outlook for manufacturing globally, it’s clear that the outlook for the sector remains precarious.

“The General Election is an opportunity for all parties to explain how they will shore up our economy. Ratifying a Brexit deal and moving on to build a vibrant future relationship with our biggest trading partner, based on frictionless trade, will be vital – both for UK manufacturers, and business as a whole.”

Germany’s BDI industry association said that “after six consecutive years of growth, Germany’s industrial sector is stuck in recession since the third quarter of 2018.” Manufacturing output is expected to contract -4% this year, versus 1.2% growth in 2018. Exports will only increase 0.5% in 2019, down from 2.1% in 2018, weakest since global financial crisis in 2009.

China PBoC to step up credit support to the economy

China’s PBoC Governor Yi Gang indicated the central bank will step up credit support to the economy. Yi said during a meeting with commercial banks that capital replenishment will be promoted to increase bank’s lending ability. Additionally, countercyclical adjustments will be stepped up to ensure growth in money supply and social financing.

Markets are expecting PBoC to lower the Loan Prime Rate (LPR) tomorrow, for the third time since it’s introduced the benchmark in August. Yi urged lenders to reference the LPR to set their own lending rates.

BoJ Governor Haruhiko Kuroda said in the semi-annual parliament testimony that “there is plenty of scope to deepen negative rates from the current -0.1%.” However, he emphasized “I’ve never said there are no limits to how much we can deepen negative rates, or that we have unlimited means to ease policy.”

Kuroda also reiterated that “Japan’s economy is expected to continue expanding and inflation will gradually head towards our 2% target”. And, “we need to remain vigilant to downside risks, particularly those regarding the global economy.” He also noted that “the effect of China’s policy measures is taking somewhat long to appear. But China’s economy will likely sustain growth of around 6% for the time being.”

Australian Dollar stays generally pressured today as RBA’s November meeting minutes struck a more dovish than expected tone. Board members noted that “a case could be made to ease monetary policy”. They refrained from easing further this month because of the concerns about “the negative effects of lower interest rates on savers and confidence”. They, however, retained the view that lower interest rates could support economic growth via traditional channels, such as “a lower exchange rate, higher asset prices and higher cash flows for borrowers. 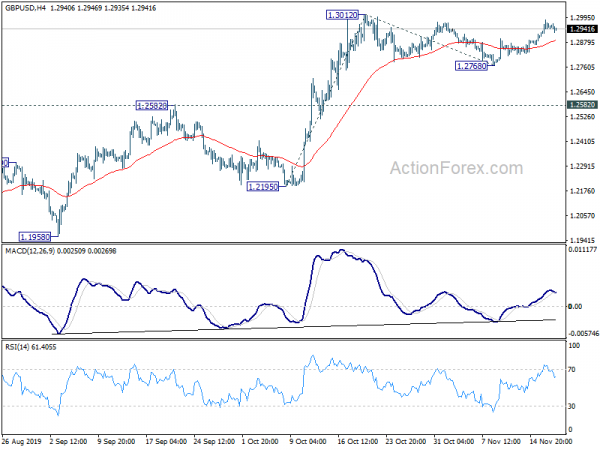 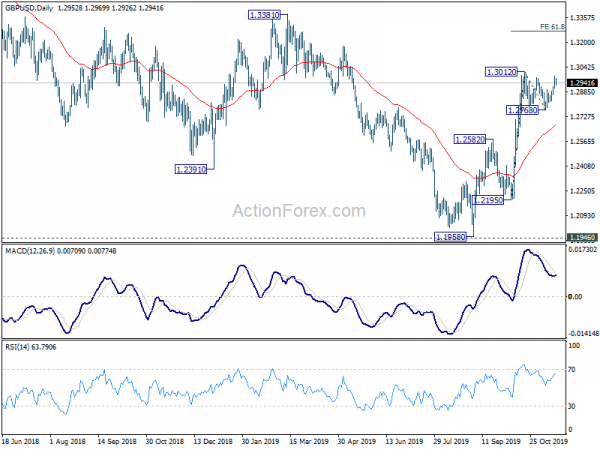