Dollar and Yen Rise on Concerns Over US-China Relations

Dollar and Yen are the two strongest ones today so far as investors are turning cautious regarding US-China relations. The so called phase-one trade was was supposed to be signed at the cancelled APEC summit in Chile last week. But there is no concrete news regarding the progress yet. The Hong Kong Human Right sand Democracy Act also drew strong objection from China, which threatens retaliation. Sentiments will probably need some breakthrough in trade talks to have a turn around.

Meanwhile, the greenback is also firm waiting for FOMC Minutes to confirm that Fed has done with the mid-cycle adjustment. Canadian Dollar recovers mildly after as CPI data matched expectations. On the other hand, Australian Dollar is the worst performing one for today, followed by Swiss Franc and then New Zealand Dollar.

Minutes of October 29-30 FOMC minutes will be a major focus later in the US session. Markets would look for clues to solidify the expectation that Fed is currently done with the mid-cycle adjustment already. Indeed, fed fund futures are pricing in over 99% chance of Fed standing pat in December.

The messages of the minute would likely echo Fed chair Jerome Powell’s testimony last week. There he hailed that “the U.S. economy is the star economy these days.” Also, the expansion is “on a sustainable footing”. “There is no reason why it can’t last, at the risk of jinxing us, in principle there is no reason to think that I can see that the probability of a downturn is at all elevated”. Monetary policy is also “in a good place”.

New York Fed President John Williams also noted that “we’ve gotten the adjustment that we need, at least right now. My outlook really is one of continued good growth, strong labor markets, inflation around 2%. Assuming that comes true, which is the baseline forecast, I think we have monetary policy in the right place.”

ECB Luis de Guindos warned “while the low interest rate environment supports the overall economy, we also note an increase in risk-taking which could, in the medium term, create financial stability challenges”. Though, he also noted that current interest rates are not yet close to the so called reversal rate. That, where low rates actually hamper the banking sector rather than stimulate lending.

Separately, Governing Council member Gabriel Makhlouf warned that “in the euro area we are also seeing protracted weakness. Both hard and soft data for the second half of the year point to continuing, moderate growth,” Additionally, “Brexit represents an enormous change – and transition – for the citizens of Ireland.”

In the regular annual assessment of national budgets by European Commission, none of the 19 Eurozone state was found at “serious” risk of breaching EU fiscal rules. Though,

Commission Vice President Valdis Dombrovskis warned that “among the budgetary plans found at risk of non-compliance, the ones that concern us most are those with debt levels that are high and not reduced fast enough.” He explicitly pointed to Italy, France, Belgium and Spain.

And, he urged “all members states that are at risk of non-compliance with the (rules) to take the necessary measures within the national budgetary process to ensure that the 2020 budget will be compliant”. Though, for now, no immediate action is requested.

USD/CHF recovers well ahead of 0.9851 support but stays in familiar range. Intraday bias remains neutral first and more sideway consolidation could be seen. On the upside, break of 0.9978 resistance will turn bias back to the upside for 1.0027 resistance first. Break there will resume whole rise form 0.9659 low. For now, downside of any down leg should be contained above 0.9841 support. But firm break there would pave the wave back to retest 0.9659 low. 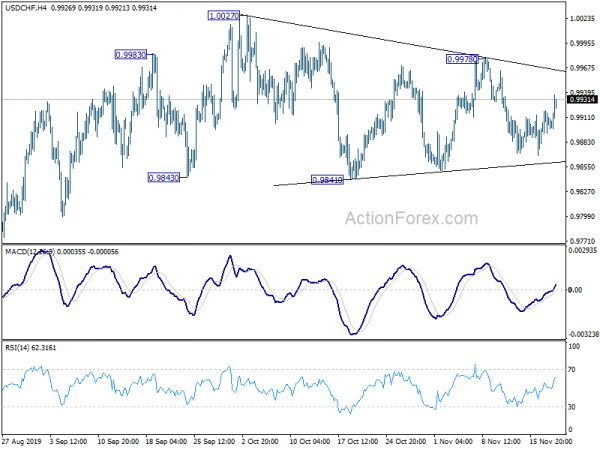 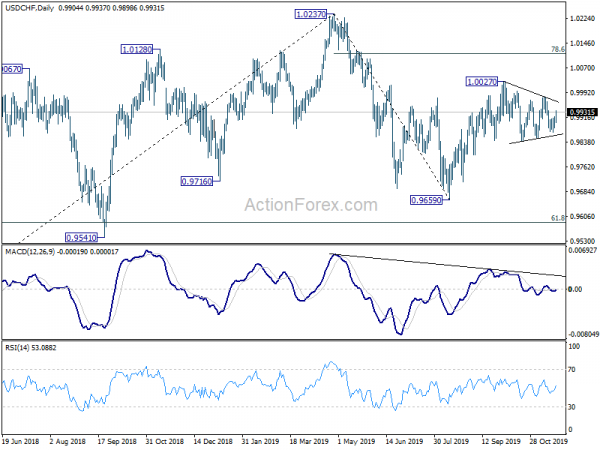