The US markets were sold off deeply overnight after after poor ISM manufacturing data and renewed tariff threats. Dollar also suffered deep selling pressure, together with Canadian. Though, there was no clear fund flows into the Japanese Yen, as risk aversion was countered by surge in major treasury yields. On the other hand, Australian and New Zealand Dollars are the stronger ones instead.

After yesterday’s strong selloff, focus is now on weakness in the greenback. AUD/USD’s break of 0.6834 resistance now suggests short term bottoming at 0.6754. Further rise could be seen back to 0.6929 resistance. EUR/USD is now eyeing 1.1097 resistance. Break will indicate completion of pull back from 1.1179 and bring further rise to this resistance. USD/CHF is extending the consolidation form 1.0027 with another fall but we’d expect strong support around 0.9868 to contain downside. However, firm break there would add to the case of overall bearishness in Dollar.

US President Donald Trump indicated he still believed China wants a trade deal with the US. But the passage of the Hong Kong Human Rights and Democracy Act “doesn’t make it better”. “The Chinese are always negotiating. I’m very happy where we are,” he added, The Chinese want to make a deal. We’ll see what happens.”

Separately, Commerce Secretary Wilbur Ross indicated that the next batch of tariffs on China is going to taken effect “if nothing happens between now and then”. US is set to impose 15% of around USD 156B of Chinese imports on December 15. Meanwhile, whether there will be tariff rollbacks also all depends on China’s “behavior between now and then”.

Also, Trump’s administration announced a series of tariffs actions yesterday. Firstly, steel and aluminum tariffs on Brazil and Argentine were restored. The US Trade Representative said it would review raising tariffs on EU products and added new ones because of the “lack of progress” in resolving the aircraft subsidies disputes. USTR also said it planned to raise tariffs on USD 2.4B in French products, including Champagne and handbags by 100%, as measures to France’s new digital services tax.

DOW closed down -0.96%, or -268.37, overnight as weighed down by new tariff threats and poor ISM manufacturing index. Trump blamed that “manufacturers are being held back by the strong Dollar, which is being propped up by the ridiculous policies of the Federal Reserve”. He went on further to urge Fed to “lower rates” and “loosen”, as “there is almost no inflation”. And that would make the US “competitive with other nations, and manufacturing will SOAR!”

RBA kept cash rate unchanged at 0.75% as expected, prepared to ease if needed

RBA kept cash rate unchanged at 0.75% as widely expected. It noted in the statement that given “the long and variable lags in the transmission of monetary policy”, the central bank was on hold to monitor developments, “including in the labour market”. Though, it reiterated that due to both global and domestic factors, ” it was reasonable to expect that an extended period of low interest rates will be required”. RBA is also “prepared to ease monetary policy further” if needed. 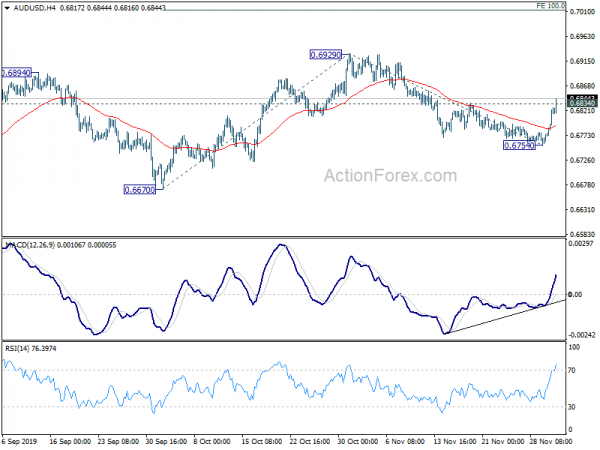 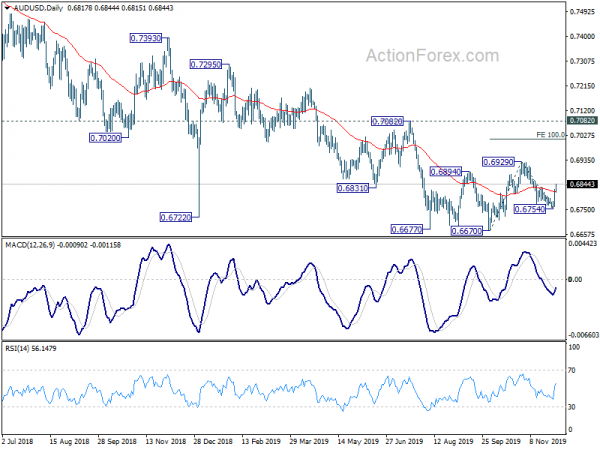