Dollar is under much selling pressure after another data miss in ADP employment. Markets are starting to worry that slowdown in the USA economy is not over. Road ahead could be even more bumpy with persistent trade risks. Bloomberg reported that US and China are still close to the phase one trade deal despite recent exchanges of harsh words. But nothing is done until all is done. The recovery in risk sentiment might be temporary. For the greenback focus will turn to ISM services and then non-farm payrolls. Canadian Dollar is looking into BoC rate decision.

In the currency markets, for now, Aussie is still the worst performing one followed by Swiss and Dollar. Sterling is the strongest one on hope of a Conservative majority after December 12 elections. Technically, GBP/USD and GBP/JPY finally have decisive break of recent resistance. In particular, clear upside acceleration is seen in GBP/USD. EUR/USD also made up its mind and break 1.1097 resistance. Further rise should be seen towards 1.1179 resistance next.

“In November, the labor market showed signs of slowing,” said Ahu Yildirmaz, vice president and co-head of the ADP Research Institute. “The goods producers still struggled; whereas, the service providers remained in positive territory driven by healthcare and professional services. Job creation slowed across all company sizes; however, the pattern remained largely the same, as small companies continued to face more pressure than their larger competitors.”

In expected fashion, China blasted US House passage of the Uighur Act of 2019 with fierce reaction. Foreign Ministry Spokeswoman Hua Chung Ying criticized US lawmakers as “too ignorant, too shameless and too hypocritical”. And, “any wrong words and deeds must pay the due price.” She added that China will not set any timeline or deadline for a trade deal with the US. And it would take “decisive”countermeasures to defend its interests against US protectionism.

On the other hand, Bloomberg reported, quoting unnamed source, that a phase-one trade deal is still expected before December 15 natural deadline by US negotiators. The known issues of guarantee on China’s purchase of US farm goods, and tariff rollbacks, are the only outstanding issues.

Tim Moore, Economics Associate Director at IHS Markit, said: “UK economy is staggering through the final quarter of 2019, with service sector output falling back into decline after a brief period of stabilisation… Service providers have attributed the recent soft patch to delayed decision-making on new projects until greater clarity emerges in relation to the domestic political landscape… “Lower manufacturing production alongside an absence of growth in the service economy means that the IHS Markit/ CIPS Composite Output Index is consistent with UK GDP declining at a quarterly rate of around 0.1%.”

Chris Williamson, Chief Business Economist at IHS Markit said: “The survey data are indicating GDP growth of just 0.1% in the fourth quarter, with manufacturing continuing to act as a major drag. Worryingly, the service sector is also on course for its weakest quarterly expansion for five years, hinting strongly that the slowdown continues to spread…. The near-stalling of the economy has been accompanied by some of the weakest price pressures we’ve seen in recent years, which threatens to keep inflation well below the ECB’s target in coming months and adds to the likelihood of further policy stimulus early next year.”

Australia GDP grew 0.4% qoq in Q3, down from Q2’s 0.6% qoq, missed expectation of 0.5% qoq. The economy grew 1.7% through the year. The set of data, in particular weak consumption, argued that the impacts of rate cuts and fiscal stimulus were rather limited. They also raised questions on RBA’s view that the economy is reaching a “gentle turning point”.

Chief Economist for the ABS, Bruce Hockman, said: “The economy has continued to grow, however the rate of growth remains well below the long run average. The reduction to tax payable did not translate to a rise in discretionary spending, which led to a visible impact to household saving”.

Also from Australia, AiG performance of Services Index dropped to 53.7 in November, down from 54.2.

China Caixin PMI Services rose to 53.5 in November, up from 51.1, beat expectation of 51.2. PMI Composite rose to 53.2, up from 52.0, highest in 21 months. Markit said that both manufacturers and services providers see solid increases in output. Overall inflationary pressures remain weak.

Zhengsheng Zhong, Director of Macroeconomic Analysis at CEBM Group said: “China’s economy continued to recover in November, as domestic and foreign demand both improved. But business confidence remained subdued, reflecting the impact from uncertainties generated by the China-U.S. trade conflicts. That will restrain a recovery in economic growth. The trade dispute is the major reason behind the slowing economic growth this year, and will become a key factor affecting the stabilization and recovery of China’s economy next year.”

GBP/USD’s rally accelerates to as high as 1.3109 so far and intraday bias remains on the upside. Rally from 1.1958 has just resumed today and should target 1.3381 resistance next. On the downside, below 1.2982 minor support will turn intraday bias neutral first. But near term outlook will remain bullish as long as 1.2827 support holds, in case of retreat. 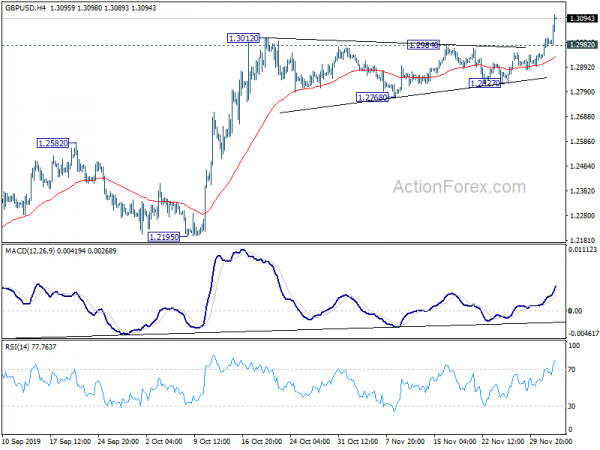 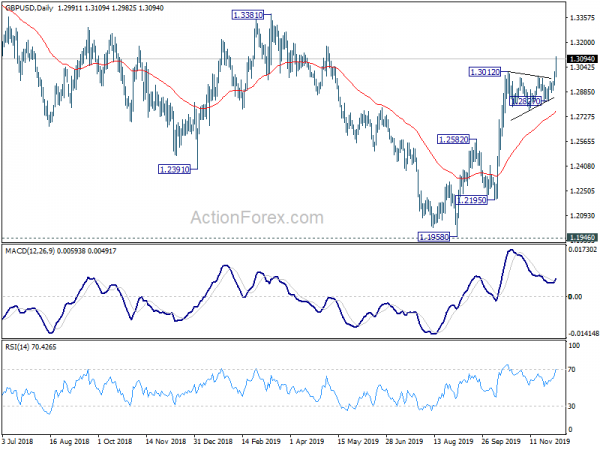