Sterling strengthen broadly in relatively quiet markets today. Ahead of Thursday’s election, Conservative’s lead over Labour jumped back to 14pts according to a latest poll. Traders continue to be optimistic on a Conservative majority to finally rectify the EU withdrawal agreement for Brexit. While US stocks jumped sharply on Friday, Asian markets are muted as partly weighed by poor Chinese trade data. The progress of US-China trade agreement will be a major market mover this week.

Technically, EUR/GBP’s decline extends today and sustained trading below 0.8411 fibonacci level will pave the way to 0.8149 projection level. GBP/USD could resume recent rise after brief consolidations and would target 1.3381 resistance next. GBP/JPY is lagging behind and is staying below 143.24 temporary top.

Survation: Conservative lead over Labour rose back to 14pts

According to the latest poll by Survation for ITV’s Good Morning Britain, the Conservative has widened their lead over Labour for the upcoming elections on Thursday. Headline voting intention for Conservative rose 2 pts to 45% while that for Labour dropped -2 pts to 31%, diving Conservative a 14pts lead, up from 9pts a week ago. Nevertheless, the lead was just back to the level on November 18, at 14 pts, when Conservative had 42% and Labour 28%.

Japan Q3 GDP revised up to 1.8% annualized on capital spending

Japan’s Q3 GDP growth was finalized at 0.4% qoq, revised up from preliminary reading of 0.1% qoq. Annualized rate was revised sharply higher to 1.8%, up from 0.2%. That’s the fourth consecutive quarter of growth despite persistent global headwinds.

As the 17-month trade war with US drags on, it was indeed the fourth consecutive of contraction in exports. On the other hand, the surprised growth in imports argued that the government’s stimulus might be in play in supporting domestic demand.

The upcoming Sunday, is the “natural deadline” for the phase one US-China trade deal. If nothing happens between now an then, a new round of tariffs on USD 156B of essentially all untaxed Chinese imports will take effect. US President Donald Trump said last week that talks were “moving right along”. Yet, he didn’t object to the idea of waiting until after 2020 election to seal the deal.

Fed, SNB and ECB to highlight a busy week

Three central banks will meet this week. Fed, SNB and ECB are all expected to stand pat. For Fed, main focus will be on the new economic projections. Traders would be eager to see if Fed officials would expect Fed to be on hold for the whole of next year. Christine Lagarde will finally have her first post meeting press conference as ECB President, which she could set the tone from now on. SNB will likely reiterate that the Swiss Franc is overvalue, negative interest rate and readiness to intervene remain necessary.

On the data front, US CPI and retail sales, German ZEW, UK GDP and productions, Australia and New Zealand business confidence, and Japan Tankan survey will catch most attentions.

EUR/GBP’s decline continues today and intraday bias stays on the downside. Sustained break of 0.8411 fibonacci level will target 161.8% projection of 0.9324 to 0.8786 from 0.9019 at 0.8149 next. On the upside, above 0.8467 minor resistance will turn intraday bias neutral first and bring consolidations, before staging another fall. 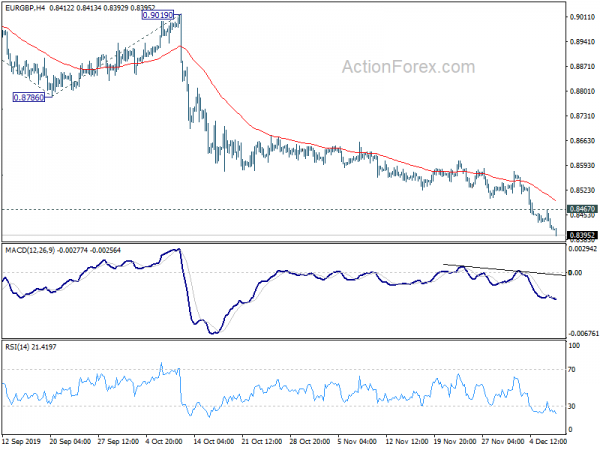 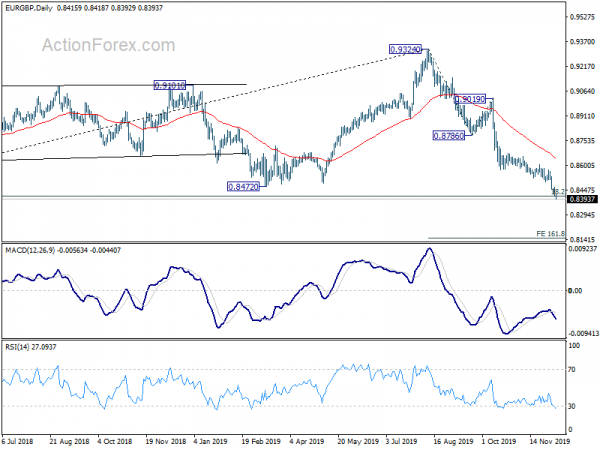