Sterling trades generally lower today after latest YouGov polls showed there is still possibility of a hung parliament after Thursday’s election. Though, loss is relatively limited as a Conservative majority remains the base case. For now, focus will firstly turn to FOMC rate decision and economic projections. As Fed is widely expected to stand pat, main market mover would be Fed’s new rate projections. At the same time, any news regarding delay in US-China tariffs would also trigger some volatilities.

Technically, GBP/USD, EUR/GBP and GBP/JPY should have turned into consolidations for now. At this point, the Pound remains bullish and further rise is in favor after the elections. USD/CHF is now pressing 0.9841 key support. Decisive break there would indicate completion of rebound from 0.9659 and turn outlook bearish for this low. If that happens, the key is to watch whether EUR/CHF accelerates towards 1.0863 support, which signals broad based strength in the Swiss Franc. Or, EUR/USD would rises through 1.1116 towards 1.1179 resistance, which signals weakness in Dollar.

Sterling retreats mildly as the last YouGov polls predicted that Conservative could win a much slimmer majority in Thursday’s elections, than projected two weeks ago. The possibility of a hung parliament cannot be ruled out.

The results of the final MRP model suggested the following results:

That is, Conservative could get a majority of only 28 seats. Back on November 28, Conservatives were projected to get 359 seats with majority of 68. Labor was predicted to win 211 seats only. Also, YouGov added that the margin of error could put the final number of Conservatives seats from 311 to 367. And, “this means that we absolutely cannot rule out the 2019 election producing a hung Parliament – nor can we rule out a larger Conservative majority.”

US Navarro: No indication of delay on tariffs on China

There were rumors that US would delay the December 15 tranche of tariffs on USD 160B of Chinese imports, essentially all untaxed goods. But such speculations are so far not backed by comments from officials formally.

White House Trade Adviser Peter Navarro said Tuesday that “it’s the president’s decision”. And, “I’ve got no indication that he’s going to do anything other than have a great deal or put the tariffs on.” He added, it’s up to Chinese as to wether to get a great deal. “Either way we’re going to be in a great place … The president loves them (the tariffs),”

White House National Economic Council head Larry Kudlow warned that tariff increase remains in play for now. “The reality is that those tariffs are still on the table,” even though President Donald Trump has struck a “constructive and optimistic tone” on the progress.

Top officials from US, Mexico and Canada finally signed a revised version of the USMCA in Mexico City yesterday, after backing from House Democrats. The signing event was held at the National Palace and was attended by Mexico President Andres Manuel Lopez Obrador, Canadian Deputy Prime Minister Chrystia Freeland, US Trade Representative Robert Lighthizer, and US White House adviser Jared Kushner.

House Speaker Nancy Pelosi hailed at a news conference that “it is infinitely better than what was initially proposed by the administration”. Canada’s Freeland celebrated it as a win for multilateralism, and said “we have accomplished this together at a moment when, around the world, it is increasingly difficult to get trade deals done”.

Now, the Democrat-controlled House in the US is ready to vote on the agreement and should be passed swiftly before the end of the year. However, Senate Majority Leader Mitch McConnell said the trade deal would not be considered next week before the chamber begins its winter congressional recess. The trade deal would be addressed in the Senate after an impeachment trial, which could last through January or February.

Fed to stand pat, focuses on economic projections, some previews

FOMC rate decision is the major focus today and Fed is widely expected to keep the fed funds rates unchanged at 1.50-1.75%. Fed officials have repeatedly noted that policy is in the right place for now. There won’t be any further adjustments unless there are material changes in the economic outlook. We’d expect Fed’s statement to reflect such message again.

Attentions would, therefore, be mainly on the new economic projections, in particular, federal funds rate projections. As in September’s meeting, median rate projections were at 1.9% in 2019 and 1.9% in 2020, before rising to 2.1% in 2021 and 2.4% in 2022. Current rates are already below these levels and thus, downside revisions should naturally be seen. Fed is unlikely to revise down 2020 projections to an extent that reflects another rate cut. Thus, the main market moving part would on the how fast Fed officials expect rates to climb back in 2021 and 2022.

With 4 hour MACD staying below signal line, intraday bias in GBP/USD is turned neutral for some consolidations first. Deeper retreat might be seen to 4 hour 55 EMA (now at 1.3068) and below. But downside should be contained well above 1.2827 support to bring rise resumption. On the upside, break of 1.3215 will resume the rise from 1.1958 to 1.3381 resistance next. 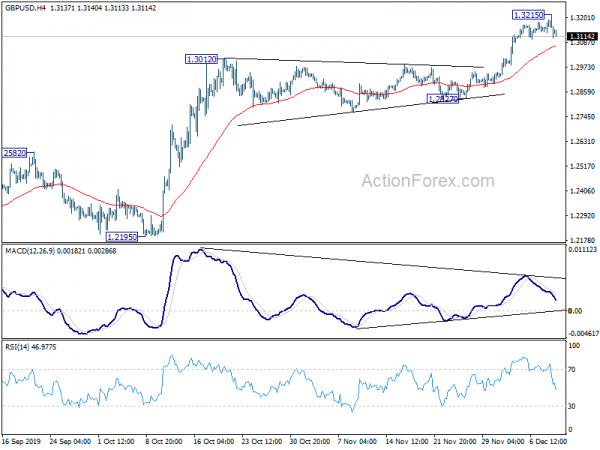 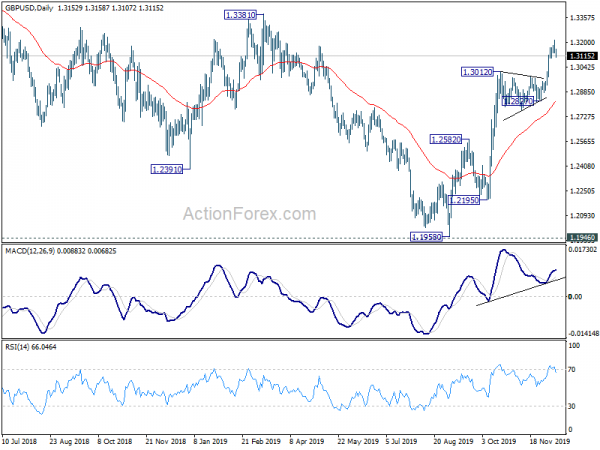