Risk Appetite Takes a Back Seat, Sterling to Face More Event Risks Ahead

Risk appetite is taking a back seat for now as investors are not too satisfied with the tiny tariff rollback in the US-China phase one trade deal. Better than expected economic data from China also provide little inspiration. Australian Dollar trades mildly lower in relatively quiet markets in Asia. The fact that it’s followed by Yen as the second weakest suggests lack of clear direction in the markets for now, after last week’s wild rides. Sterling is currently the stronger one and more volatility is anticipated with the heavy UK calendar ahead.

Technically, GBP/USD, GBP/JPY and EUR/GBP are staying in consolidations at this point. There is no chance in the Pound bullish outlook. We’d expect 1.3050 minor support in GBP/USD, 142.47 support in GBP/JPY, and 0.8508 resistance in EUR/GBP to hold. USD/JPY was rejected by 109.72 resistance last week despite the broad based selloff in Yen. This level could be back into focus this week. Break could be a sign of return of risk appetite or another rally in treasury yields.

US Trade Representative Robert Lighthizer confirmed again on Sunday that the phase one trade deal with China is “totally done, absolutely”. He also told CBS that it’s “not just about agriculture and other purchases”. He emphasized, “the way to think about this deal, is this is a first step in trying to integrate two very different systems to the benefit of both of us.”

CBA Chief Economist, Michael Blythe said: “The PMI readings indicate that the Australian economy ended 2019 on a softish note. The RBA’s ‘gentle turning point’ for the economy remains elusive. And the weakness in private spending evident in the Q3 GDP data looks to have continued in Q4, with a flow on to labour demand as well. There were also some early indications that the disruptions associated with the terrible bushfires around Sydney and elsewhere are having some impact”.

In the 2019-20 Mid-Year Economic and Fiscal Outlook (MYEFO), the government said the economy “continues to show resilience in the face of weak momentum in the global economy as well as domestic challenges such as the devastating effects of drought and bushfires.” However, there were some notable downward revisions in economic projections. In particular, through the two fiscal years from 2019 to 2021, household consumptions, and wages growth were deeply downgraded. These revisions affirm the case for more RBA easing.

Japan PMI Manufacturing dropped to 48.8 in December, down from 48.9. The index stayed below 50 threshold for the eighth straight month. PMI Services rose to 50.6, up from 50.3. PMI Composite was unchanged at 49.8.

Joe Hayes, Economist at IHS Markit, said: “Latest survey data showed that the Japanese economy remained stagnant in December… The most disconcerting takeaway from the fourth quarter survey data has been the marked loss of momentum in the services sector… It’s now clear that service sector is unable to offset the industrial weakness, which does not bode well for growth prospects in 2020”.

National Bureau of Statistics spokesman Fu Linghui said the data showed positive changes in the month and reiterated that China can achieve its full-year economic growth target. Fu also said China and US should continue bilateral trade talks and work towards removing all existing tariffs.

After enjoying a strong week on election results and Brexit optimism, Sterling will now face another string of key events. BoE is widely expected to keep monetary policy unchanged and the focus will remain on voting. Back in November, two members surprised the markets by voting for a rate cut. It would be interesting to see if they’d continue to do so. Meanwhile, Mark Carney will have his last meeting as BoE Governor. It’s reported that the next governor won’t be announced until Friday. Additionally, UK will release PMIs, inflation, retail sales, employment and GDP. All could be market moving.

Elsewhere, US regional Fed surveys, GDP final and core PCE inflation will be watched. Eurozone PMIs, German Ifo will be featured. Australian Dollar will look into RBA minutes to gauge the chance of more easing next year. That could also depend on employment data to be featured. Canada CPI and retail sales, New Zealand GDP will also catch some attentions. BoJ meeting will likely be another non-event. 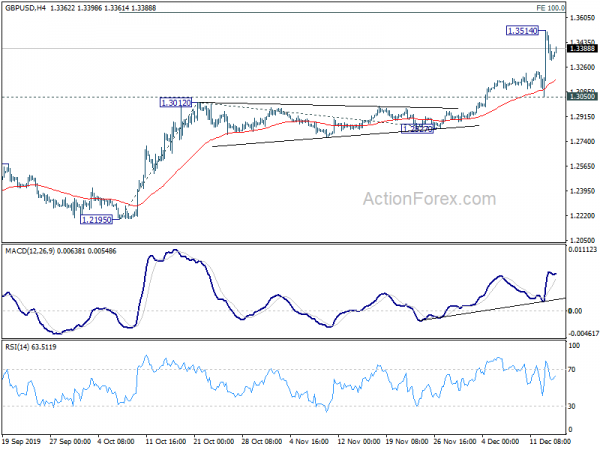 In the bigger picture, rise from 1.1958 medium term bottom is on track to retest 1.4376 key resistance. Reactions from there would decide whether it’s in consolidation from 1.1946 (2016 low). Or, firm break of 1.4376 will indicate long term bullish reversal. In any case, for now, outlook will stay bullish as long as 1.2827 support holds. 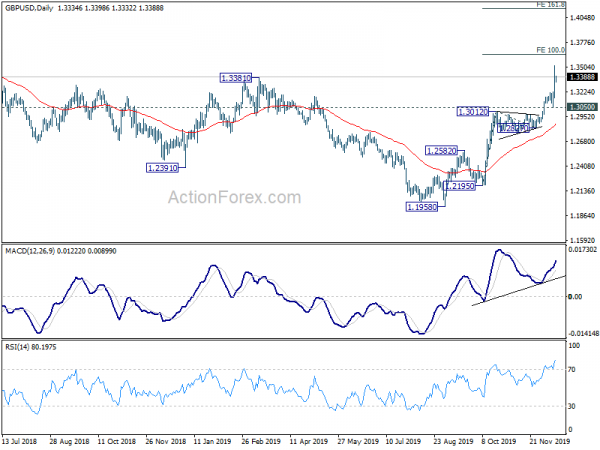