Euro is trading as one of the weakest major currencies, together with Canadian Dollar, for today. There is little inspiration from ECB rate decision and press conference. Canadian Dollar is weak on free fall in oil price, with WTI pressing 55 handle now. Australian Dollar continues to be the strongest one for today, as supported by better than expected employment data. But upside is relatively limited. Yen is the second strongest on risk aversion. Global sentiments are pressured after China locks up two cities today to contain the outbreak of the new coronavirus.

Technically, EUR/USD is now pressing 1.1066 support. Decisive break there will add to the case of completion of corrective rebound from 1.0879 at 1.1239. Deeper fall should then be seen to 1.0981 support for confirmation. EUR/CHF has already broken 1.0724 support to resume medium term down trend towards 1.0648 projection level.

ECB left monetary policy unchanged as widely expected. Main refinancing rate is held at 0.00%. Marginal lending facility and deposit facility rates were held at 0.25% and -0.50% respectively. The asset purchase program will continue at a monthly pace of EUR 20B.

The forward guidance was also kept unchanged. “The Governing Council expects the key ECB interest rates to remain at their present or lower levels until it has seen the inflation outlook robustly converge to a level sufficiently close to, but below, 2% within its projection horizon, and such convergence has been consistently reflected in underlying inflation dynamics.”

In the post meeting press conference, ECB President Christine Lagarde said incoming data since last meeting were in line with the baseline scenario of “ongoing, but moderate, growth” of the economy. Weakness in manufacturing sector remains a “drag” on momentum. But employment and wages growth continue to “support the resilience” of the economy. Inflation remains “subdued overall” but there were signs of moderate increase in underlying inflation.

Lagarde also repeated that “risks surrounding the euro area growth outlook, related to geopolitical factors, rising protectionism and vulnerabilities in emerging markets, remain tilted to the downside”. But risks were “less pronounced as some of the uncertainty surrounding international trade is receding.”

Headline inflation is “likely to hover around current levels” in the coming months. Inflation expectations have stabilized or ticked up slightly. Underlying inflation remained generally muted by there were indications of a moderate increase. weaker growth momentum is “delaying” pass-through of labor cost pressures to inflation.

French Finance Minister Bruno Le Maire said France and the US has agreed today on the way to push digital taxation at the OECD level. The bilateral dispute between the two countries on the issue is set aside. The development reduces the risk of US retaliation on France’s digital taxes.

“We had long talks this morning with the US Treasury Secretary and the OECD Secretary General, and I am happy to announce to you that we have found an agreement between France and the United States, providing the basis for work on digital taxation at the OECD,” Le Maire said. “It’s good news, because it reduces the risk of American sanctions and opens up the prospect of an international solution on digital taxation.”

A series of proposals were hammered out for redrafting of international tax rules. The proposals will be put to OECD next week for discussions between 137 governments.

UK Secretary of State for Business, Energy and Industrial Strategy Andrea Leadsom said the government is still pushing for digital tax despite repeated objections by the US. At the same time, it’s just one particular issues which will not stand in the way of a UK-US trade agreement.

She told Talk Radio: “The United States and the United Kingdom are committed to entering into a trade deal with each other and we have a very strong relationship that goes back centuries so some of the disagreements that we might have over particular issues don’t in any way damage the excellent and strong and deep relationship between the U.S. and the UK,”

“There are always tough negotiations and tough talk but I think where the tech tax is concerned it’s absolutely vital that these huge multinationals who are making incredible amounts of income and profit should be taxed and what we want to do is to work internationally with the rest of the world to cover with a proper regime that ensures that they’re paying their fair share.”

SNB Chairman Thomas Jordan maintained today that negative interest rates are necessary for the Swiss economy. The board is aware of the side effects, and “that is the reason why we changed the threshold”, referring to raising the deposit limit before the charging -0.75% interest. He added, “that gives us the freedom to maintain negative rates for longer and also to cut the rate if necessary.”

Jordan also reiterated that the Franc is still “highly valued” and interventions are also necessary. But he emphasized that “we don’t manipulate Swiss Franc exchange rate… never intend to weaken the franc for any advantage”.

Yesterday, SNB Governing Board Member Andrea Maechler said there is no change in the monetary policy after US Treasury put Switzerland back into currency manipulator watchlist. She added, “we are doing monetary policy for Switzerland.” 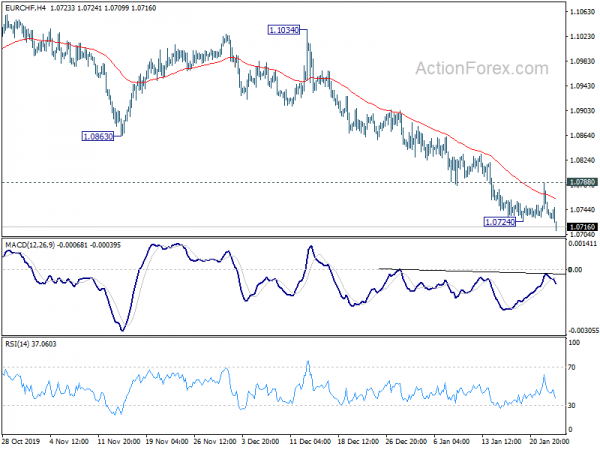 In the bigger picture, down trend from 1.2004 is (2018 high) is still in progress. More importantly, it’s likely a long term down trend itself, rather than a correction. Further fall should be seen to 1.0629 support and possibly below. On the upside, break of 1.1059 resistance is needed to be the first sign of medium term bottoming. Otherwise, outlook will remain bearish in case of rebound. 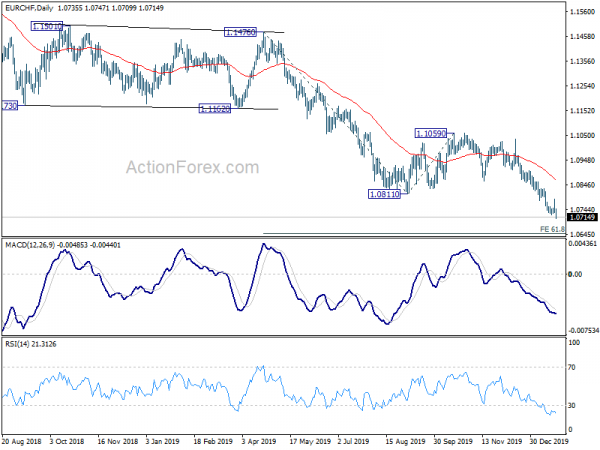