Sterling Tumbles on Worries Over Negotiations With EU, Euro Dragged Down

Focuses in the forex markets turned temporarily from China’s coronavirus outbreak to Brexit. Both EU and UK expressed strong positions regarding up coming trade negotiations. Their stance reminds traders that risk of cliff-edge Brexit by year end remains. Sterling suffers steep selloff and drags down the Euro. On the other hand, stabilization in European stock markets lift commodity currencies and Dollar mildly higher.

Both Euro and Sterling are under pressure today as EU and UK lay down the tone for negotiations with tough words. UK Prime Minister Boris Johnson said in London that the “beneficial magic” of free trade is “fading”. “Free trade is being choked, and that is no fault of the people, that is no fault of individual consumers.” It’s “he politicians who are failing to lead, the mercantilists are everywhere, the protectionists are gaining ground.” He added, “from Brussels to China to Washington, tariffs are being waved around.”

On trade negotiations with EU, Johnson said UK should not be obliged to accept EU rules in key areas. Meanwhile, UK is not going to insist that the EU follows all its rules. He added that UK does not intend to lower its own standards after Brexit. In major other ares, UK is ahead of EU in standards. And, if EU has worries about state aid, it should focus on France and Germany instead.

Separately, EU chief Brexit negotiator Michel Barnier said the EU will be “very demanding” for a level playing field with the UK during the negotiations. It’s the key to open the EU markets for zero tariffs and zero quotas. EU issued draft guidelines for negotiations covering economic partnership, the security partnership, and the institutional governance framework. Negotiations can begin immediately once the mandate is approved by the European Council at a special summit on February 20.

ECB de Guindos: Signs of global stabilization, but lots of uncertainties from coronavirus

ECB Vice President Luis de Guindos expected inflation to hover at current low levels over the six months. He also “started to see some signs of stabilization on a global level”. Risks are also less tilted to the downside. However, he still sees “a lot of uncertainties” surrounding China’s coronavirus outbreak.

He also urged that “completing the banking union is pivotal” for the performance of the Eurozone. Fiscal must play a role as side effects of monetary policy are becoming more tangible.

Eurozone PMI Manufacturing was finalized at 47.9, up from December’s final reading of 46.3. Markit noted there were slower falls in output, new orders and purchasing recorded. Nevertheless, business confidence improved to the highest level in 16 months.

Looking at some member states, Germany, Spain, Italy, Austria and the Netherlands stayed in contraction. But improvements were noted across all. Germany’s reading was at 11-month high of 45.3, Italy at 8-month high at 48.9, France at 2-month high of 51.1.

Chris Williamson, Chief Business Economist at IHS Markit said: “Eurozone manufacturing started 2020 with green shoots of recovery in sight… “The improvement adds to our view that the eurozone economy could see growth strengthen in the coming months, meaning the ECB will hold off with any policy changes and instead focus on its strategic review. However, key risks which could alter the brightening outlook include the threat of US tariffs and trade war escalation, Brexit-related disruptions to trade as well as uncertainty surrounding the impact of the Wuhan coronavirus.”

UK PMI manufacturing finalized at 50.0, but full revival in capital spending some way off

UK PMI Manufacturing was finalized at 50.0 in January, up from December’s 47.5. New orders, employment and business confidence rose. But new export orders declined for the third consecutive month.

Rob Dobson, Director at IHS Markit, said: “The start of 2020 saw the performance of the UK manufacturing sector stabilise, as receding levels of political uncertainty following the general election aided mild recoveries in new order intakes, employment and business confidence.” However, “an ongoing downturn at investment goods producers suggests that the economic certainty required to achieve a full revival in capital spending may still be some way off, likely reflecting lingering uncertainty about the Brexit road-map in the coming year.”

China Caixin PMI Manufacturing dropped to 51.1 in January, down form 51.5, missed expectation of 51.3. Production and new work both expanded at softer rates. Employment fell for the first time in three months. Though, business confidence improved as trade tensions eased.

Zhengsheng Zhong, Chairman and Chief Economist at CEBM Group said: “China’s manufacturing economy recovered at a slower pace at the start of the year. Although corporate confidence was boosted by the trade deal, some manufacturers did not replenish stocks despite the pickup in production, due to limited improvement in domestic and foreign demand. Pressure from rising raw material costs is worth attention. In the near term, China’s economy will also be impacted by the new pneumonia epidemic, and therefore need to gain support from proper countercyclical policies.”

Japan PMI Manufacturing was finalized at 48.8 in January, a slight increase from December’s 48.4. But contracted has continued since last May. Output and new orders recorded further declines. Export demand dipped, but downturn shows signs of easing. On the positive side, business confidence hits highest level since August 2018.

Joe Hayes, Economist at IHS Markit, said: “Manufacturing PMI data for Japan are still portraying a struggling industry, causing firms to cut back production for another month due to subdued demand and global uncertainties. “Scratching beneath the surface and we find that the capital goods sector was a particular straggler, with data here showing sharp and accelerated reductions in production and new orders. Falling demand for capital goods does not bode well for the global economic outlook, nor for Japanese exports.”

Australia AiG Performance of Manufacturing Index dropped to 45.4 in January, down from 48.3. That’s the lowest reading since 2015 and suggested faster contraction in the sector. AiG said, “January is traditionally the slowest month for Australian manufacturing, but the start to 2020 was even slower than usual. All manufacturing sectors reported weaker conditions in January compared to December and only the food & beverage sector reported expanding conditions.”

Intraday bias in GBP/USD is turned neutral with today’s sharp fall. On the upside, above 1.3209 will turn bias to the upside for 1.3284 resistance. Break will pave the way to retest 1.3514 high. On the downside, break of 1.2977 will bring a test on 1.2905 support next. Overall, price actions form 1.3514 are seen as developing into a corrective pattern, which might extend further, or even deeper. 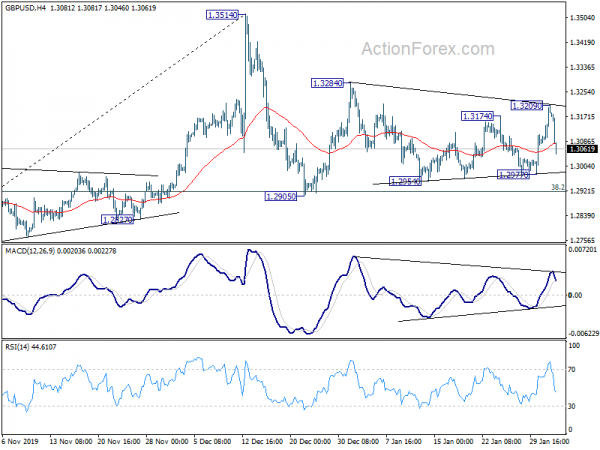 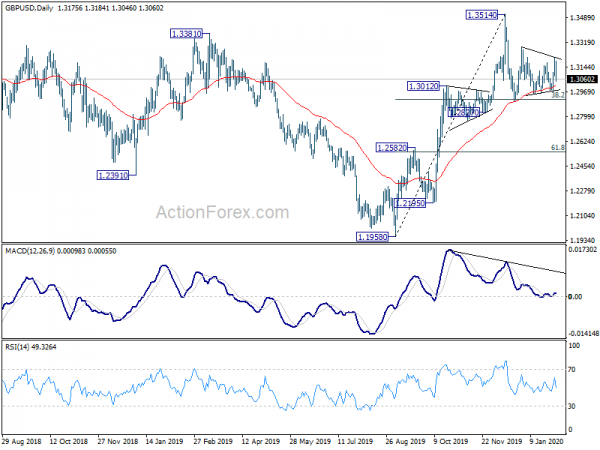