Market moods turned sour again today as outbreak of the coronavirus seems to be getting more serious outside China. In particular, South Korea cases surged by 52 to 156. In China, there were 889 new confirmed cases yesterday, with total accumulated cases rose to 75465. China’s Science and Technology said vaccine could be submitted for clinical trials around late April. But that’s firstly too late for containing the outbreak. Secondly, markets just ignore such comments.

In the currency markets, New Zealand and Australian Dollars are trading as the weakest for today while Yen recovers. However, Yen remains the weakest one for the week on concern of economic and political impact of the coronavirus that originated in China. Canadian and Dollar are currently the strongest for the week.

Technically, 0.6583 projection level in AUD/USD will be a level to watch today. There is prospect of bottoming there, but sustained break will likely bring further downside acceleration. 1.0608 in EUR/CHF is another level to watch. Break there will resume larger down trend. More importantly, that might drag USD/CHF away from 0.9851 fibonacci resistance.

Kuroda added that uncertainty regarding China’s coronavirus outbreak is high, because of the impact on exports, production, and tourism. He’d watching the effects with “grave concern.” Also, the coronavirus will be the “biggest topic on the agenda” at this week’s G20 meeting.

Joe Hayes, Economist at IHS Markit, said: “latest PMI data dash any hopes of a first quarter recovery in Japan and significantly raise the prospect of a technical recession”. February’s data “stack the odds heavily against Q1 growth, despite Abe’s best efforts to stimulate the economy after the sales tax hike”.

Australia CBA PMI Manufacturing rose 0.2 to 49.8 in February, up from 49.6. However, PMI Services dropped to 48.4, down from 50.6. PMI Composite also turned into contraction at 48.3, down from 50.2. The rate of output reduction was the “steepest seen since data collection began in May 2016”. Panel membered linked this to “a combination of subdued client demand, adverse weather and the Covid-19 outbreak”.

CBA Senior Economist, Gareth Aird said: “The February flash PMIs imply a contraction in private demand. Whilst this is clearly a disappointing result, it is not altogether surprising given the two exogenous shocks that have hit the Australian economy – the bushfires and the coronavirus (Covid-19).”

“Our main concern is that these event have hit the global and local economies at a time when domestic demand was already soft. The level of both the services and manufacturing PMIs highlights the need for more policy stimulus. With monetary policy doing most of the heavy lifting an easing in fiscal policy continues to look the most appropriate response to support aggregate demand.”

Eurozone and UK PMIs will be the major focuses in European session. In particular, poor readings from Eurozone could trigger new round of selloff in Euro. Eurozone will also release CPI final. Later in the day, Canada will release retail sales. US will release PMIs and existing home sales. 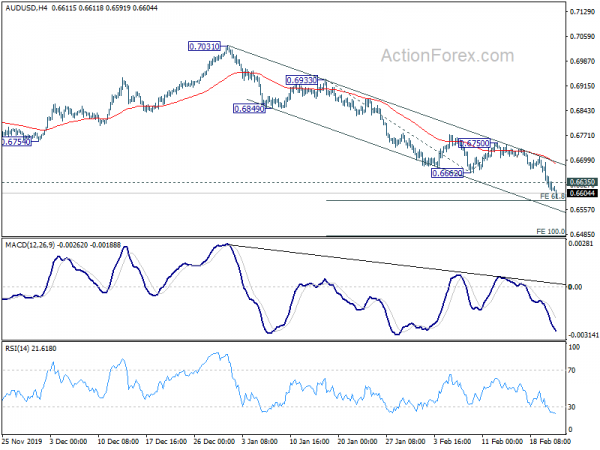 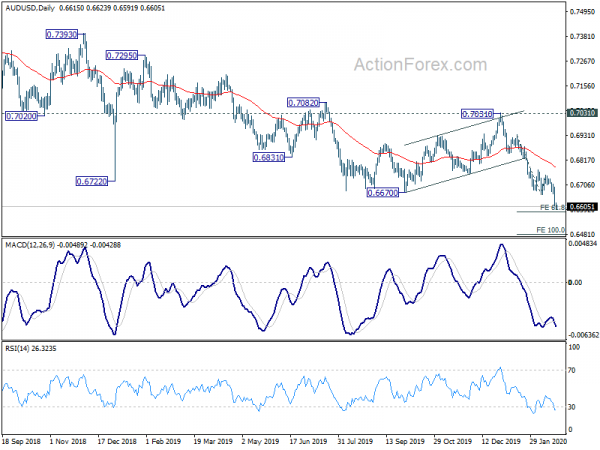