Euro’s rally accelerates today, in particular against Dollar and took out an important near term fibonacci resistance. There are various explanations on Euro’s strength. Considering the strength in Swiss Franc, as well as the coronavirus outbreak in Iran, the rally could be seen a manifestation of safe haven flow.

Meanwhile, comments from ECB officials so far suggest that they’re not ready for more monetary stimulus yet. Actually, we can see that ECB’s easing package last September as leading actions, and other central banks are now catching up. In particular, markets are pricing in an aggressive -50bps Fed cut this month, with talks of even an emergency meeting. These factors could all be in play.

But we’d like to remind people that Eurozone’s recovery has been fragile so far. Manufacturing remains in in recession as suggested by PMI and it will be heavily affected by coronavirus triggered supply chain disruption. The fragile recovery has been driven by domestic demand and consumption, which will be even badly affected by an Eurozone wide outbreak. As of now, there are 1704 confirmed cases in Italy, 150 cases in Germany, 130 cases in France, 120 cases in Spain. So, beware of any drastic turn in Euro.

Technically, near term focus will now be on 1.1239 in EUR/USD. Decisive break there will at least confirm medium term bottoming, with prospect of bullish reversal. EUR/GBP takes out 0.8676 fibonacci level today and it’s heading towards 0.8786 support turned resistance. Firm break there will indicate completion of whole fall from 0.9324 and could bring retest of this high ahead.

OECD slashes global growth forecast, coronavirus is not only a demand shock

In the interim report titled “Coronanvirus: the world economy at risk“, OECD warned that world is in its “most precarious position” since the 2008 global financial crisis. 2020 full-year growth forecasts is slashed from 2.9% to 2.4%, weakest since 2009.

OECD added that the outbreak “has already brought considerable human suffering and major economic disruption”. Growth prospects also “remain highly uncertain”. It also warned that if the situation worsens, “coordinated policy actions across all the major economies would be needed” for health care and economic stimulus.

OECD chief economist Laurence Boone said however, noted that “it’s not only a demand shock, it’s a confidence shock and supply chain disruption shock that central banks could not deal with alone.” She added, “confidence is falling everywhere so you don’t want to send a reactionary message, but at least a message that you are discussing and being prepared to take measures, and to do that jointly.”

UK PMI Manufacturing was finalized at 51.7 in February, up from January’s 50.0. Markit noted that output rose at the fastest pace since April 2019. Vendor lead times lengthened as supply-china disruption rose.

Rob Dobson, Director at IHS Markit, which compiles the survey: “Supply-chain disruptions were emerging rapidly, however, as the COVID-19 outbreak led to a substantial lengthening of supplier lead times, raw material shortages, reduced inventories of inputs, rising input costs and reduced export orders from Asia and China in particular…

With supply-chain headwinds rising, and trade negotiations with the EU starting, it remains to be seen whether the recovery can stay on course during the coming months.”

Eurozone PMI Manufacturing was finalized at 49.2 in February, up from January’s 47.9. Markit noted that output and new orders declined at slower rates. Average lead times lengthened market as firms utilized inventories. Looking at the member states, readings in France (49.8), Italy (48.7) and Germany (47.8) remained in contraction. Though, Greece hit 10-month high at 56.2 and the Netherlands hit 13-month high at 52.9.

Chris Williamson, Chief Business Economist at IHS Markit said: “February saw encouraging signs that the eurozone’s manufacturing downturn is easing. Production contracted at the slowest rate for nearly a year and, despite lost export sales, new orders fell at the weakest rate for 15 months amid signs of rising internal demand, notably from consumers.”

But he warned that “any further spreading of the COVID-19 epidemic risks driving increased risk aversion and a reduction of spending by both businesses and consumers.”

ECB Villeroy: We’re not there yet for more action to support coronavirus affected economy

ECB Governing Council member Francois Villeroy de Galhau said that the central bank is prepared to act to support the economy if needed due to impact of coronavirus outbreak. However, the current policy is already accommodative, and ECB has already committed to support the economy through keep interest rates low. He added that “we are not there yet” regarding additional stimulus.

Separately, EU Internal Market Commissioner Thierry Breton said European tourism industry would suggest EUR 1B loss in revenue per month due to the outbreak. He said, “Chinese tourists are not coming to Europe since January. It means two million nights lost. That is one billion euros per month since January.”

Zhengsheng Zhong, Chairman and Chief Economist at CEBM Group said: “The sharp decline was due to stagnant economic activity across the country disrupted by the pneumonia epidemic caused by a novel coronavirus. The supply and demand sides of the manufacturing sector were both weak.”

BoJ Governor Haruhiko Kuroda issued a rare emergency statement today, warning of the spread of the Wuhan coronavirus. He said, “Overseas and domestic financial markets continue to make unstable movements due to heightening uncertainty over the impact on the economy from the spread of the coronavirus. The BOJ will monitor developments carefully, and strive to stabilize markets and offer sufficient liquidity via market operations and asset purchases.”

The statement argues that BoJ would use the current tools to counter the impact of coronavirus outbreak first. That is, focuses will be on market operations and liquidity. Apparently, further monetary easing is not seen as an imminent step that BoJ would take.

Australian AiG Performance of Manufacturing index dropped to 44.3 in February, down from 45.4. That’s the fourth straight months of contraction in the manufacturing sector, last occurred back in 2014. It’s also the lowest monthly reading in nearly five years. All sectors were in contraction except for food & beverages.

Australian Industry Group chief executive Innes Willox warned, “The disruptive effects of the coronavirus, including on supply chains, are deepening and adding to the slowdown that has been in train since the closing months of 2019… The coronavirus is negatively impacting the exports of fast-moving consumable items to China and a number of businesses reported supply chain difficulties arising from factory shutdowns in China.”

EUIR/USD rises to as high as 1.1164 so far. Strong break of 61.8% retracement of 1.1239 to 1.0777 at 1.1063 raises the chance of larger bullish reversal. Intraday bias now remains on the upside for 1.1239 resistance. Sustained break there will turn outlook bullish. On the downside, break of 1.1038 minor support will turn intraday bias neutral first. 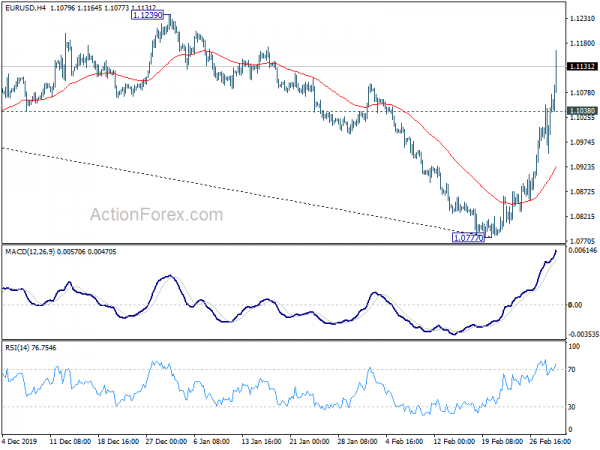 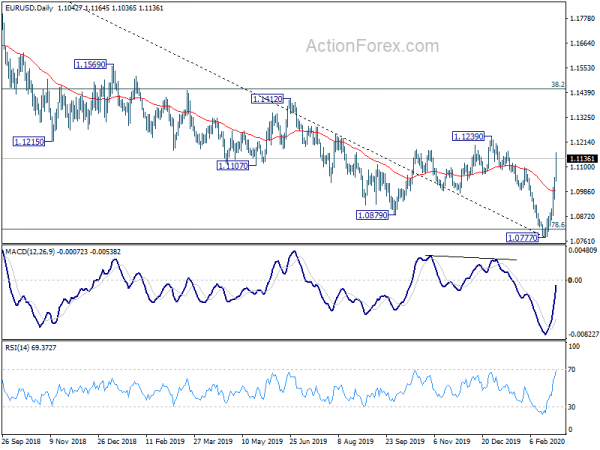