The financial markets generally stabilized today even though global coronavirus outbreak shows no signs of slowing down. Total global cases reach 92725, with 5186 in South Korea, 2336 in Iran, 2036 in Italy, 283 in Japan, 191 in France, 188 in Germany, 152 in Spain, 110 in Singapore and 103 in USA. G7 pledged to have fiscal and monetary responses but stop short of giving any details yet. In the currency markets, Yen is generally firmer today, followed by Australian Dollar. Euro is the weakest for today, paring some recent gains, followed by Canadian. It remains to be seen if Euro’s recent strong rally is done.

Technically, EUR/USD is losing some upside momentum ahead of 1.1239 resistance. For now, further rise is in favor as long as 1.1038 minor support holds. Decisive break of 1.1239 will confirm medium term bottoming at 1.0777 low. Nevertheless, break of 1.1038 will retain near term bearishness and turn bias to the downside. On the other hand, EUR/CHF’s recovery from 1.0584 also lost momentum ahead of 1.0737 resistance. Near term outlook stays bearish and break of 1.0584 will resume larger down trend.

G7 Finance Minister and Central Bankers issued a joins statement, said they are “closely monitoring” the spread of the coronavirus and its impacts on markets and economic conditions. They committed to use “all appropriate policy tools” to achieve strong, sustainable growth and safeguard against downside risks. They also “stand ready to cooperate further on timely and effective measures.”

Finance ministers are ready to take actions, including fiscal measures where appropriate. Central banks will continue to fulfill their mandates, thus supporting price stability and economic growth while maintaining the resilience of the financial system.

Swiss GDP growth slowed to 0.3% qoq in Q4, but beat expectation of 0.2% qoq. GDP grew 0.9% for 2019 as a whole. SECO said “exporting industries lost momentum, while growth was underpinned by the domestic economy. Switzerland thus mirrored the international development.”

Manufacturing stagnated with 0.0% growth, as “international headwinds are continuing to hit cyclically sensitive sectors such as machinery and metals, which suffered further falls in turnover”. Exports dropped -0.5% while imports dropped -2.7%.

UK PMI Construction rose to 52.6 in February, up from 48.4, beat expectation of 49.0. That’s the first expansionary reading since April 2019. Markit said housing and commercial work underpinned the rebound in activity. New orders increased at fastest pace since December 2015. Staffing levels were also close to stabilization.

Tim Moore, Economics Director at IHS Markit, which compiles the survey: “February’s survey data adds to signs that the UK construction sector has started to rebound after a downturn through the second half of last year.. But “the fly in the ointment is the uncertain impact of the coronavirus outbreak on UK economic growth prospects. A renewed slowdown could see domestic investment spending put back on hold and dampen the outlook for the UK construction sector.”

BoE Governor Mark Carney told the Parliament that the MPC is “assessing the economic impacts” of the global coronavirus outbreak. And it’s “considering the policy implications of various possible scenarios, including the extent to which supply disruptions have aggregate demand consequences via cash flow, cost and availability of finance, as well as confidence effects.”

He noted that BoE’s role is to “help UK businesses and households manage through an economic shock that could prove large but will ultimately be temporary.” The bank will also “take all necessary steps to support the UK economy and financial system consistent with its statutory responsibilities.”

RBA becomes the first central bank to cut interest rate in light of the negative impacts from the coronavirus outbreak. The central bank lowered the cash rate by -25 bps to 0.50% in March, expected to ease further in the near future. As revealed in the accompanying statement, the members worried that the pandemic could seriously hurt Australia’s economy, which has already got hammered by bushfires in summer.

Regarding the decision to lower the policy rate, RBA noted that “the global outbreak of the coronavirus is expected to delay progress in Australia towards full employment and the inflation target”. As such, it was “appropriate to ease monetary policy further to provide additional support to employment and economic activity”. The central bank pledged to “continue to monitor developments closely and to assess the implications of the coronavirus for the economy” and be “prepared to ease monetary policy further to support the Australian economy”.

Intraday bias in USD/JPY remains neutral for consolidation above 107.36 temporary low. Another recovery cannot be ruled out. But upside should be limited below 109.89 minor resistance to bring another decline. As noted before, whole rise form 104.45 has completed after rejection by 112.40 resistance. Break of 107.36 will target a test on 104.45 low. 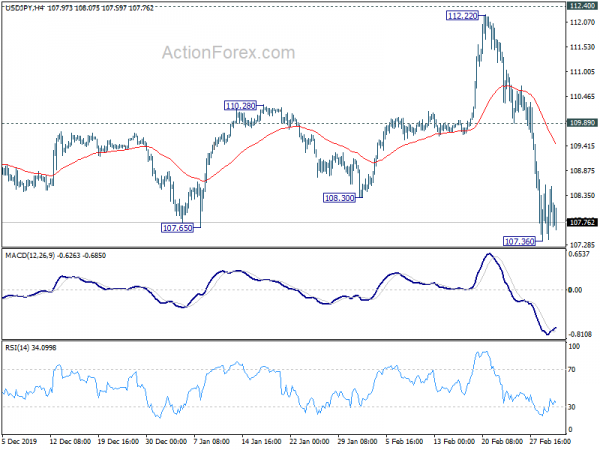 In the bigger picture, current steep decline and rejection by 112.40 resistance mixes up the medium term outlook again. Sustained break of 108.30 support will argue that larger fall from 118.65 (Dec 2016) hasn’t completed. Further fall could be seen through 104.45 low. Nevertheless, break of 112.40 resistance will revive the case of bullish reversal and target 114.54 key resistance for confirmation. 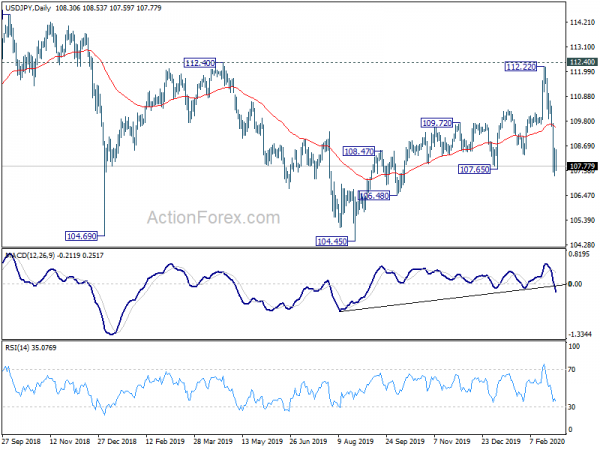