UK is at the center of focus today as BoE announced an emergency rate cut, followed by massive coronavirus relief package from the government. Yet the Pound is relatively unmoved. Stock markets also show no optimism as the outbreak continues to worsen. After initial gains, all major European indices reversed, accompanied by sharp decline in DOW futures. Back on currencies, Yen remains the strongest one for the week, followed by Euro and Swiss Franc. Canadian dollar remains the weakest one, followed by Australian.

UK’s new Chancellor of Exchequer Rishi Sunak delivers a massive GBP 30B stimulus package today to counter the devastating impact of coronavirus. He pledged to “doing everything we can to keep this country, and our people, healthy and financially secure.” Additionally, he said he’s in “constant communication” with BoE for “coordinated” and “comprehensive” response to the coronavirus.

The plan include GBP 5B emergency fund for the National Health Service, and “whatever it needs, whatever it costs”. People will also be given financial support if they need to cope with coronavirus, with statutory sick pay for everyone who’s been told to self-isolate, and more generous welfare rules. Additionally, the government will refund sick pay bills for 14 days in full, for two million companies with less than 250 staff.

BoE announced emergency measures to counter the economic shocks from coronavirus today, including a rate cut. Bank rate is lowed by -50bps to 0.25% on unanimous vote. Asset purchase target is kept unchanged at GBP 435B. Also, a new Term Funding scheme with addition a incentives for SMEs is introduced.

The central bank said, “the reduction in Bank Rate will help to support business and consumer confidence at a difficult time, to bolster the cash flows of businesses and households, and to reduce the cost, and to improve the availability, of finance.” Additionally, the Financial Policy Committee has reduced the UK countercyclical capital buffer rate to 0% of banks’ exposures to UK borrowers with immediate effect. The rate had been 1% and had been due to reach 2% by December 2020.

Carney: It’s a big package to bridge across economic disruption

After the emergency rate cut, BoE Governor Mark Carney and his successor Andrew Baily appeared as at press conference. He said today’s”comprehensive and timely package” will help households and businesses “bridge across the economic disruption” caused by the coronavirus. He hailed that it’s a “big package”, with a ” a huge term funding certainty for the financial sector”. Also, “there are fiscal measures that are coming”.

It’s “too early” to judge if there will be a recession in the UK, he added. “We have a sense of the direction, a sense of the orders of magnitude, could be large.” Though, “there is no reason for it to be as bad as 2008 if we act as we have, and if there is that targeted support.”

Australia Westpac consumer sentiment dropped -3.8% to 91.9 in March, hitting the lowest level in five years. More importantly, it’s the second lowest level since the global financial crisis. Across the five component sub-indexes, biggest fall was around expectations for the economy, The “economy, next 12 months” sub-index recorded a spectacular -12.8% drop taking it to 77.9, a five year low.

Westpac said, “The Reserve Bank Board next meets on April 7. Given the clear risks being faced by the Australian economy over the next few months the Board is likely to lower the cash rate by a further 0.25%.”

And, cash rate will hit RBA’s lower bound of 0.25%, “the next policy approach is likely to involve a form of unconventional monetary policy where indications are that the Board favours the approach of setting a rate target further out the yield curve and signalling the commitment to defend that target”.

RBA Debelle: Too uncertain to assess coronavirus impacts beyond Q1

RBA Governor Guy Debelle said in a speech that because of the coronavirus, the global economy will be “materially weaker” in Q1 and in the period ahead. For Australia, RBA has estimated the impact of education and tourism sectors. These services exports, which account for 5% of GDP, would drop at least -10% in Q1. That translates into -0.5% subtraction of GDP just from these two sources. But that, he added, “it is just too uncertain to assess the impact of the virus beyond the March quarter.”

Debelle also said, the coronavirus is “a shock to both demand and supply”. Monetary policy “does not have an effect” on the supply side. But It can work to “ensure demand is stronger than it otherwise would be”. The government’s intention to support jobs, incomes, small business and investment will “provide welcome support” to the economy. “The combined effect of fiscal and monetary policy will help us navigate a difficult period for the Australian economy.”

According to a survey by Monetary Authority of Singapore, economists now expect the country’s economy to grow only 0.6% this year. That’s sharply lower than 1.5% growth as expected in the previous survey in December. That is within the government’s forecast range of -0.5% to 1.5%. 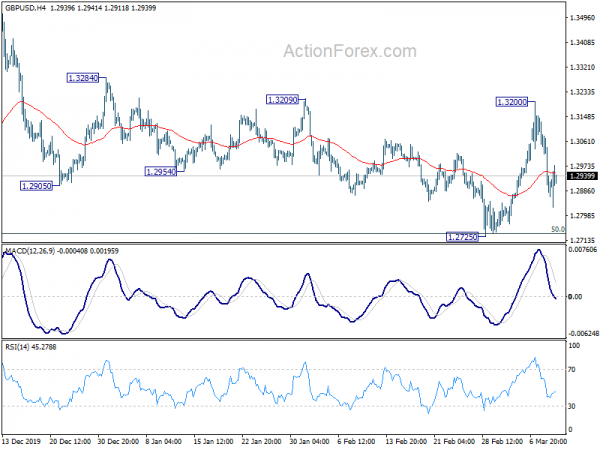 In the bigger picture, rise from 1.1958 is expected resume after correction from 1.3514 completes. Next target is 1.4376 key resistance. Reactions from there would decide whether it’s in consolidation from 1.1946 (2016 low). Or, firm break of 1.4376 will indicate long term bullish reversal. However, sustained break of 1.2582 resistance turned support will dampen these views and bring retest of 1.1958 low instead. 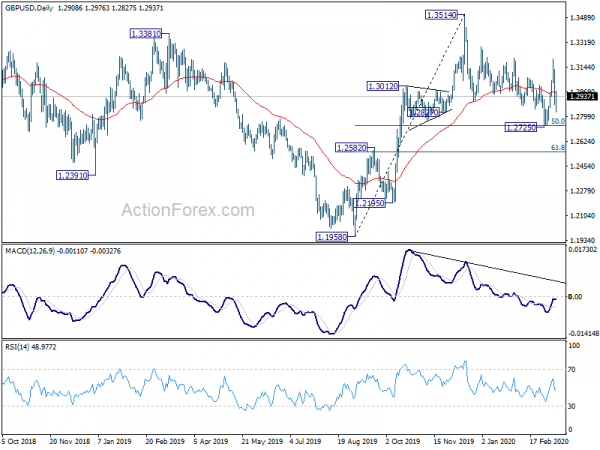