PMI data released together generally showed a disastrous picture in the service sectors around the world, due to coronavirus pandemic and the measures to contain it. Nevertheless, these data are generally shrugged off as they’re generally expected. Reactions would likely be muted too even if the data come in worse. Instead, global stocks are generally higher in reaction to Fed’s QE infinity as announced yesterday.

In the currency markets, Dollar remains the weakest one for today as of the time of writing. It’s followed by Canadian Dollar and then Yen. On the other hand, Sterling is the strongest one, followed by Australian Dollar and then New Zealand Dollar. Yet, we’d like to emphasize that most pairs and crosses are seen as staying in consolidation only. There is no change in bullishness of Dollar and Yen, and bearishness of commodity currencies. Markets are just digesting recent wild moves for now. Indeed, rebounds in the stock markets are also just part of near term consolidations too.

UK CBI Industrial Order Expectations dropped to -29% in March, down from -18%. 15% of manufacturers reported order books above normal while 44% said they’re below. Manufacturers anticipate output volumes to contract at a faster pace in the next three months (-20%), marking the weakest expectations since the financial crisis (April 2009 -32%).

Anna Leach, CBI Deputy Chief Economist, said: “The manufacturing sector is facing unprecedented challenges due to COVID-19, such as widespread disruption to supply chains and weakening demand due to domestic containment measures. With expectations for output set to fall in the coming months, it’s now more important than ever manufacturers get the support they need.”

“The surveys highlight how the COVID-19 outbreak has already dealt the UK economy an initial blow even greater than that seen at the height of the global financial crisis. With additional measures to contain the spread of the virus set to further paralyse large parts of the economy in coming months, such as business closures and potential lockdowns, a recession of a scale we have not seen in modern history is looking increasingly likely.

“Historical comparisons indicate that the March survey reaading is consistent with GDP falling at a quarterly rate of 1.5-2.0%, a decline which is sufficiently large to push the economy into a contraction in the first quarter. However, this decline will likely be the tip of the iceberg and dwarfed by what we will see in the second quarter as further virus containment measures take their toll and the downturn escalates.

“Any growth was confined to small pockets of the economy such as food manufacturing, pharmaceuticals and healthcare. Demand elsewhere has collapsed, both for goods and services, as increasing numbers of households and businesses at home and abroad close their doors.”

“Business activity across the eurozone collapsed in March to an extent far exceeding that seen even at the height of the global financial crisis. Steep downturns were seen in France, Germany and across the rest of the euro area as governments took increasingly tough measures to contain the spread of the coronavirus.

“The March PMI is indicative of GDP slumping at a quarterly rate of around 2%, and clearly there’s scope for the downturn to intensify further as even more draconian policies to deal with the virus are potentially implemented in coming months.

Joe Hayes, Economist at IHS Markit said: ” Latest PMI data show that the Japanese economy slipped into an aggressive downturn in March that was primarily led by the service sector… In contrast to other parts of Asia, the US and Europe, Japan (at the time of writing) has not issued a public lockdown, while there are reports that footfall in places such as Tokyo remains high. If the outbreak were to accelerate, the economic damage could far exceed what we’ve seen so far, particularly if The Olympic Games are postponed”.

CBA Chief Economist, Michael Blythe said: “The sharp deterioration in PMI readings during March underline the increasing impact of the coronavirus on the Australian economy. The services sector is being hit hard by the cancellation of events, general fears about social interaction and a very sharp decline in offshore demand as travel restrictions bite.

“The manufacturing sector is faring a little better. But the leading indicators are flashing warning signs. The deterioration in supplier delivery times is accelerating, highlighting the disruption to supply chains. And the lower Aussie dollar is pushing input prices up at a rapid rate”.

Intraday bias in USD/CHF remains neutral for the moment. Consolidation from 0.9901 might extend lower. But downside should be contained by 0.9649 support to bring another rally. As noted before, fall form 1.0237 should have completed at 0.9181. Above 0.9901 will target 1.0023 resistance and then 1.0237. However, firm break of 0.9649 will dampen immediate bullishness and bring deeper pull back. 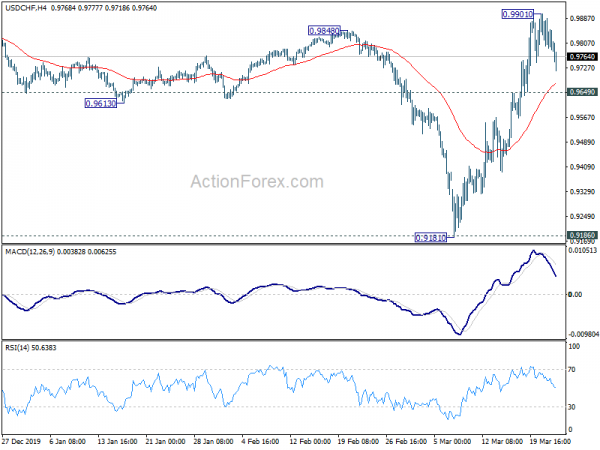 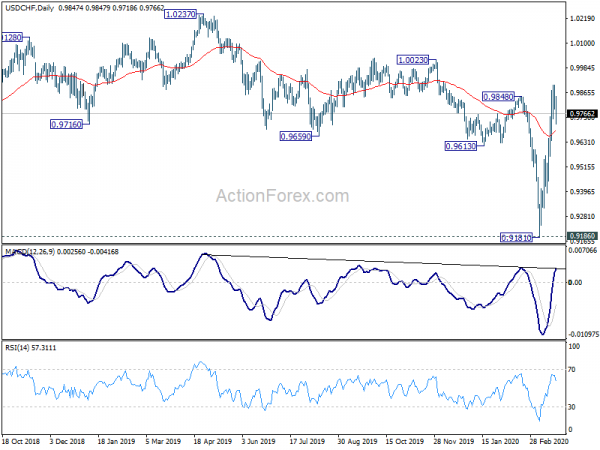