Dollar is currently trading as the strongest one for the week, followed by Yen. On the other hand, Euro and Swiss Franc are both the weakest ones for now. Overall sentiments in the market are mildly risk averse but there is no committed move. Oil price was given a lift overnight after US President Donald Trump’s tweet regarding production cut by Saudi Arabia and Russia. But there was no follow through buying as Russia bluntly denied it. Gold is also holding in range. Non-farm payrolls from US might finally trigger some sustainable moves.

Technically, the decline in EUR/USD is looking more due to the weakness in Euro, instead of strength of Dollar. Nevertheless, further fall remains in favor to retest 1.0635 low. EUR/JPY and EUR/GBP could hold the keys on how fast Euro’s fall would be. EUR/JPY is eyeing 115.586/116.12 support zone and break will resume larger down trend. EUR/GBP is pressing near term fibonacci level at 0.8747. Decisive break there will dampen near term bullishness and turn focus to 0.8276/82 key support zone.

Japan to decide coronavirus stimulus next week, may use deficit covering bonds

Japan Economy Minister Yasutoshi Nishimura said that the government is targeting to decide on the coronavirus economic response package in the early half of next week. He added that Prime Minister Shinzo Abe gave him the instruction to compile the measures in 10 days on March 28.

Separately, Finance Minister Taro Aso noted that the government will consider issuance of deficit-covering bonds to fund the massive stimulus package. The government would also make use of crisis credit lines to support airlines hit by the coronavirus pandemic.

Japan PMI Services dropped to 33.8 in March, down from 46.8. The index was close to record low seen in February 2009 (33.7). PMI Composite dropped to 36.2, down from 47.0. Markit said that output fell at near record pace as coronavirus pandemic hits demand. Employment declined as operating requirements slumped. Also, business activity was expected to fall sharply over the coming 12 months.

Joe Hayes, Economist at IHS Markit, said, latest data showed that the economic impact from coronavirus pandemic “has become widespread”. The sharp fall signals “how aggressive and sudden the drop in activity has been”. The combined manufacturing and services PMI already point to “GDP contracting at an annual of around 8%”. If the outbreak were to escalate in Japan, Q2 GDP could be “poised for an annual decline in excess of 10%”.

The Asian Development Bank slashed China’s growth forecast to just 2.3% in 2020 on coronavirus pandemic. Though, it expects a strong bounce back of 7.3% in 2021. ADP noted warned that a new round of domestic infection of further global spread could “increasingly dampen investor sentiment, consumer spending, credit sustainability, and overall economic activity”. Revival of trade conflict with the US is another risk.

China Caixin PMI Services recovered to 43.0 in March, up from 26.5. PMI Composite rose from 27.5 to 46.7, second lowest reading in 11 years. Caixin said that business activity and new work both declined at slower rates, but employment fell at quickest pace on record. Output charges also cut at fastest rate since April 2009.

Zhengsheng Zhong, Chairman and Chief Economist at CEBM Group said: “The recovery of economic activity remained limited in March, although the domestic epidemic was contained. In the first two months this year, China’s value-added industrial output and services output dropped 13.5% and 13% year-on-year, respectively.

“Estimates suggest their declines haven’t been as steep in March and the country’s first-quarter GDP is likely to have dropped significantly. Such a situation requires policymakers to cut this year’s GDP growth target and step up countercyclical efforts to support areas like consumption and infrastructure, particularly given the accelerated contraction in the service sector job market.”

Australia AiG Construction Index dropped to 37.9 in March, down from 42.7. That’s the lowest level since May 2013. Across the four construction sectors, the house building sector indicated modest growth for a fourth consecutive month (trend). Contractions in the apartment and commercial construction sectors were steeper (a lower index result), while the contraction in engineering construction activity eased slightly in March.

Eurozone PMI services final and retail sales will be released in European session, together with UK PMI services final. US non-farm payroll report will be the major focus for the day. US will also release ISM non-manufacturing. 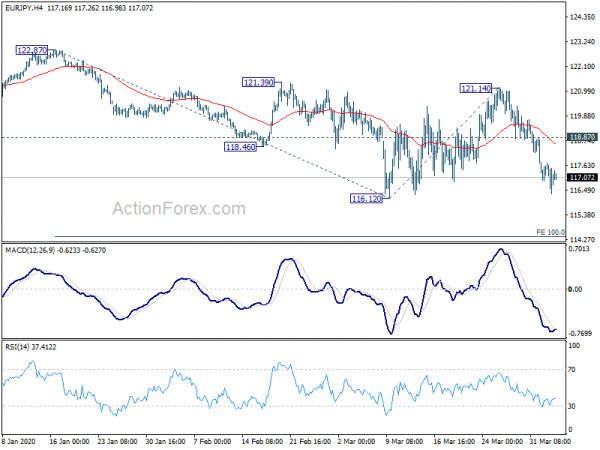 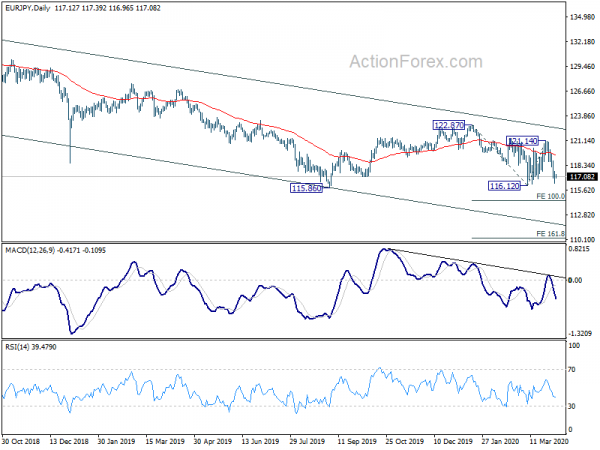