Euro suffers heavy selling in today on terrible PMI data, which suggests that the coronavirus pandemic damage could be far more severe than imaginable. The common currency drags down the Swiss Franc too. Dollar couldn’t ride on Euro’s weakness and even faces some selling after another set of astronomical jobless claims numbers. Commodity currencies are generally higher for today. For the week, Aussie and Yen are now the strongest ones while Sterling and Euro are the worst performing.

BoE Vlieghe: In principle, economy should return approximately to the pre-virus trajectory afterwards

BoE MPC member Gertjan Vlieghe said in a speech that “based on the early indicators, and based on the experience in other countries that were hit (by the coronavirus pandemic) somewhat earlier than the UK, it seems that we are experiencing an economic contraction that is faster and deeper than anything we have seen in the past century, or possibly several centuries.”

“The economy’s potential is severely disrupted at the moment,” he added, “but once the pandemic is over, and other things equal, in principle it should return approximately to the pre-virus trajectory.”  “The current priority for monetary policy, with a lot of help from fiscal policy, is to return the economy to that pre-virus trajectory as soon as possible.”

“The MPC stands ready to take further action to support the economy consistent with its remit,” Vlieghe noted.

Chris Williamson, Chief Business Economist at IHS Markit, said: “Simple historical comparisons of the PMI with GDP indicate that the April survey reading is consistent with GDP falling at a quarterly rate of approximately 7%. The actual decline in GDP could be even greater, in part because the PMI excludes the vast majority of the self-employed and the retail sector, which have been especially hard-hit by the COVID-19 containment measures.

Chris Williamson, Chief Business Economist at IHS Markit said: “April saw unprecedented damage to the eurozone economy amid virus lockdown measures coupled with slumping global demand and shortages of both staff and inputs. The extent to which the PMI survey has shown business to have collapsed across the eurozone greatly exceeds anything ever seen before in over 20 years of data collection. The ferocity of the slump has also surpassed that thought imaginable by most economists, the headline index falling far below consensus estimates.

“Our model which compares the PMI with GDP suggests that the April survey is indicative of the eurozone economy contracting at a quarterly rate of approximately 7.5%. With large swathes of the economy likely to remain locked down to contain the spread of COVID-19 in coming weeks, the second quarter looks set to record the fiercest downturn the region has seen in recent history.

“Hopes are pinned on containment measures being slowly lifted to help ease the paralysis that businesses have reported in April. However, progress looks set to be painfully slow to prevent a second wave of infections. In the face of such a prolonged slump in demand, job losses could intensify from the current record pace and new fears will be raised as to the economic cost of containing the virus.”

“Given that the economy is largely frozen, this unprecedented cliff dive is hardly surprising. Retailers, manufacturers and service providers must prepare for a tough recession in the immediate future,” explains Rolf Bürkl, GfK Consumer Expert. “Since it now seems evident that the easing of the COVID-19 containment measures will be very slow in order to take a cautious approach, the consumer climate can expect to face tough times in the coming months too.”

Joe Hayes, Economist at IHS Markit, said: “The crippling economic impact from global coronavirus pandemic intensified in April… The decline in combined output across both manufacturing and services was the strongest ever recorded by the survey in almost 13 years of data collection, surpassing declines seen during the global financial crisis and in the aftermath of the 2011 tsunami.

“Overall, GDP looks set to decline at an annual rate in excess of 10% in the second quarter. The current state of emergency will stay in place until 6 May, although given Japan’s lagged response relative to other parts of the world, one would expect this to be extended, meaning the the harsh economic effects are likely to drag out further”.

Australia PMI manufacturing dropped to 45.6, services down to 19.5

Australia CBA PMI Manufacturing dropped fro 49.7 to 45.6 in April. Manufacturing output decreased for the eighth successive month in April, and to the greatest extent since the survey began in May 2016. PMI Services dropped from 38.5 to 19.5. Company shutdowns and coronavirus restrictions resulted in severe declines in both business activity and new orders in the service sector. PMI Composite dropped from 39.4 to 22.4.

CBA Head of Australian Economics, Gareth Aird said: “This is an astonishing result. The collapse in the headline index reflects the severe contraction in economic activity currently taking place. The services sector has been hit a lot harder than the manufacturing sector. And the pace of job shedding is concerning though not surprising given the large number of Australian businesses that remain shut. The extent to which the PMIs rebound will be dictated in large part by the duration of the enforced shutdown”. 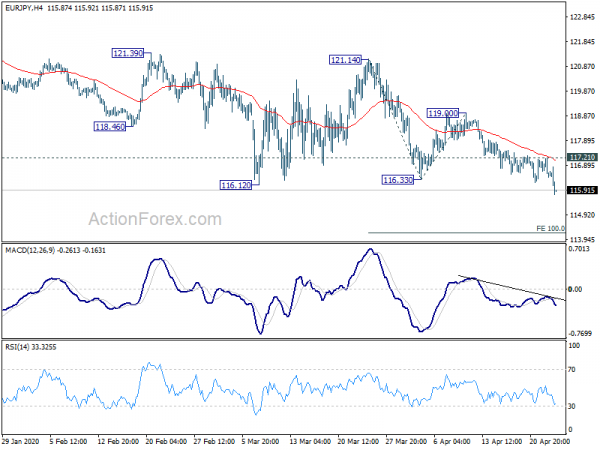 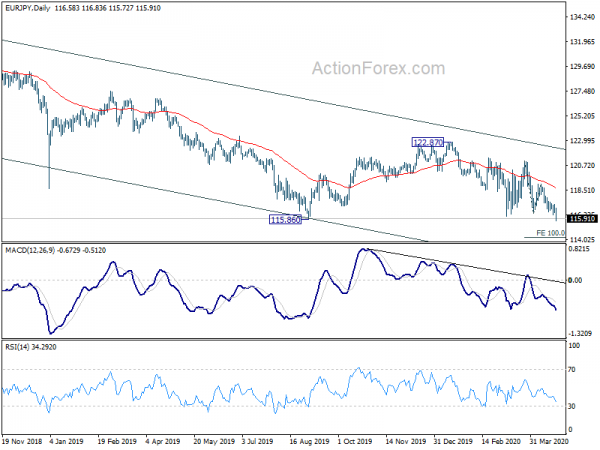