New Zealand Dollar drops broadly today following RBNZ’s decision to nearly double the QE program, and indicates its openness to negative rates. Australian Dollar is following as a distant second weakest. The sharp decline in US stocks overnight doesn’t carry forward to Asian markets. Other major currencies are relatively mixed, with Canadian and sterling as the stronger ones, followed by Dollar. The greenback was somewhat supported by Fed officials’ comments against negative interest rates. Fed chair Jerome Powell will have a chance to clarify his stance today.

Technically, AUD/NZD’s break of 1.0748 resistance suggests resumption of rebound from 0.9994. Further rise would be seen to 1.0865 resistance next. NZD/USD is eyeing 0.5994 support and break will indicate completion of corrective rebound from 0.5469. Deeper fall would then be seen back to retest this low. Similarly, NZD/JPY is heading back to 63.55 support. Break will also indicate completion of corrective rebound from 59.49 and bring retest of this low (more on NZD/USD and NZD/JPY). It remains to be seen if weakness in Kiwi would eventually drag down the Aussie too. 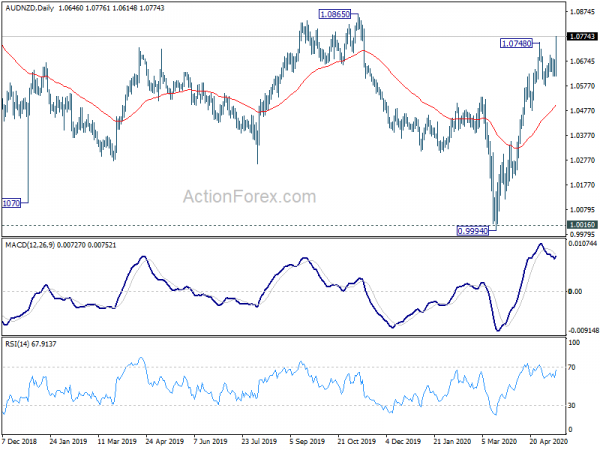 Sterling pairs are also worth a watch today. EUR/GBP is now eyeing 0.8863 resistance with today’s rebound. Firm break there will confirming short term bottoming at 0.8670 and bring rebound to 0.8987 fibonacci level. GBP/USD is also eyeing 1.2247 support. Decisive break there will indicate near term reversal, with a double top pattern (1.2647, 1.2645). Deeper fall could be seen back to retest 1.1409 low.

RBNZ kept OCR unchanged at 0.25% as widely expected. Also, the central bank decided to expand the upper limit of the Large Scale Asset Purchase program (LSAP) to NZD 60B, up from NZD 33B. Government inflation-indexed bonds are now included in the program, together with government bonds and local government funding agency bonds.

RBNZ is also “prepared to use additional monetary policy tools if and when needed including reducing the OCR further, adding other types of assets to the LSAP programme, and providing fixed term loans to banks.”

In the minutes, the committee noted that a “negative” OCR will “become an option in future”, even though financial institutions are “not yet operationally ready. Discussions with the institutions about preparing for negative rate are “ongoing.

Australia Westpac consumer sentiment rebounded notably by 16.4% to 88.1 in May, up from 75.6. That’s also the biggest gain since record began nearly fifty years ago, reversing much of April’s -17.7% decline. However, the index is still “relatively weak by historical standard”, being the second lowest reading since global financial crisis and “firmly in pessimistic territory”.

Looking at some big movers, the “economy, next 12 months” sub-index jumped 32.6% to 71.2, up from 53.7. The prospect of earlier than expected reopening has “soothed some of the worst fears”, even though consumers still do not expect a return to growth any time soon. The “time to buy a major item” sub-index surged 26.7% to 96.6, up from 76.2. Retailers can expect more “foot traffic” as restrictions ease.

Westpac also noted that today’s results “provide genuine reason for optimism that the Australian economy can surprise forecasters on the upside in these highly uncertain times.”.

Cleveland Fed President Loretta Mester said she doesn’t support using negative rates as a monetary policy tool in the US. She noted, “the effects on the banking system and money market funds would make me not want to use that as a tool”.

On the economy, she said in a speech that a “reasonable baseline outlook”for the economy to grow again in H2 and unemployment begins to move down, as stay-at-home restrictions are lifted. But “achieving this outcome depends on a number of things falling into place”. A lot of conditions is just “another way of saying there is considerable risk”.

“It isn’t difficult to imagine more pessimistic scenarios, especially if an upsurge in virus cases necessitates shutting down activity again or if there is considerably more harm in terms of business and personal bankruptcies or if instabilities in the banking system arise,” she said. “At this point, I think some of the more pessimistic outcomes are almost as likely as the reasonable baseline I just described.

Fed Kaplan not a fan or proponent of negative interest rates

Minneapolis Fed President Neel Kashkari also said policymakers have been pretty unanimous opposing negative interest rate. While he prefer not to say never on negative rates, there are other things Fed could do first. On the economy, he reiterated the view that “we are not going to fix the economy until we get our hands around the virus.” “We might be in this for a long time.”

Fed Harker: Reopening too soon might be a health catastrophe and reverse economic recovery

Philadelphia Fed President Patrick Harker warned yesterday of the risk of reopening the economy too soon. In a more pessimistic scenario, there is a second wave of the coronavirus after reopening. “Not only would this be a health catastrophe, but it would reverse the recovery as well”, he said.

Harker also said that Q2 data will be “brutally painful. “What happens after that to a large extent depends on how the virus moves through our society, and our reaction to it in terms of balancing stay-at-home policies versus an intelligent — and I want to stress, intelligent — reopening.”

Looking ahead, UK GDP, productions and trade balance are the major focuses in European session. Eurozone will also release industrial production. Later in the day, US will release PPI and crude oil inventories. 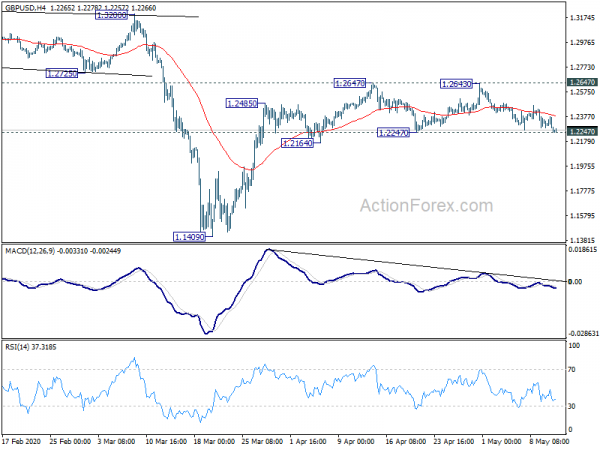 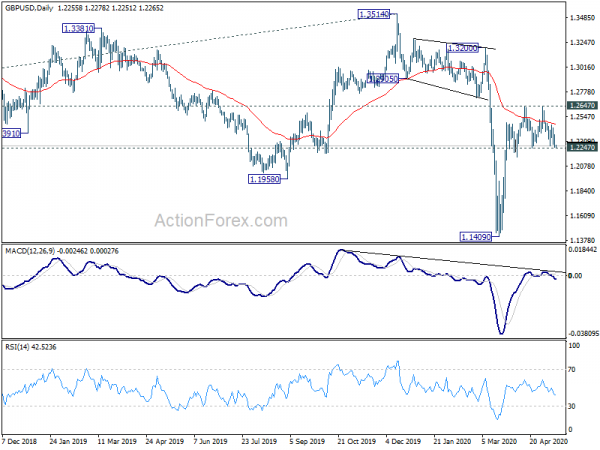