Risk appetite continues in Asian session, with help from positive data from China. China’s economy appears to be on track for recovery even though the road would remain bumpy. In the currency markets, New Zealand Dollar is leading Australian Dollar higher, followed by Euro. Dollar, Yen, Swiss Franc continue to be the weakest ones on current market sentiments.

Technically, AUD/NZD is pressing 1.0865 near term resistance but struggles to break through clearly so far. Reaction to this resistance level will decide which of Aussie or Kiwi would lead the next risk rally move. Meanwhile, EUR/GBP is also pressing 0.8880 support now and break will suggest completion of near term rebound from 0.8670. This development would also decide who’d be the stronger European major in the next move. 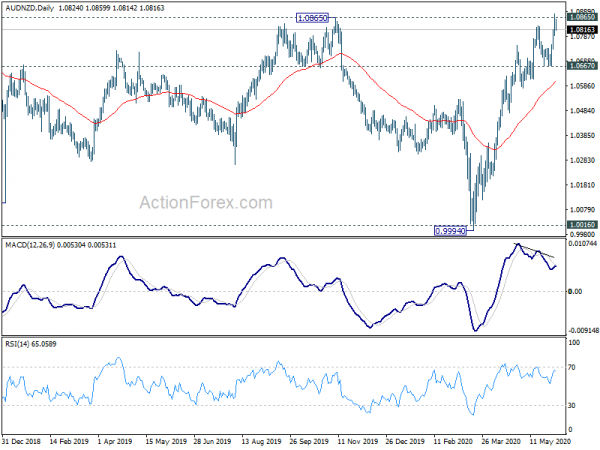 Swiss GDP contracted -2.6% qoq in Q1, worse than expectation of -2.2% qoq. “Due to the coronavirus pandemic and the measures to contain it, economic activity in March was severely restricted. The international economic slump also slowed down exports.”

Japan PMI composite rose to 27.8 in May, indicative of -10% annualized GDP contraction

Joe Hayes, Economist at IHS Markit, said: “While the month of May has seen the Japanese government reduce the stringency of its lockdown, latest survey data indicated that economic activity continued to sink at a rate which had previously been unrivalled before the coronavirus crisis began… Looking at May’s survey data in isolation, the reading of the Composite PMI is indicative of GDP falling by around 10% on an annual basis. Taking into consideration the April reading, which was even worse, it is clear that the impact on second quarter GDP is going to be enormous.”

China Caixin PMI Services rose to 55.0 in May, up from April’s 44.4. PMI Composite rose to 54.5, up from 47.6, back in expansion territory. Markit said that business activity and new work rose at quickest pace since late 2010. Pandemic continued to weigh heavily on export orders. Employment fell slightly as firms look to raise efficiency.

Wang Zhe, Senior Economist at Caixin Insight Group said: “In general, the improvement in supply and demand was still not able to fully offset the fallout from the pandemic, and more time is needed for the economy to get back to normal. The composite employment gauge stayed in negative territory as companies were cautious about increasing headcounts. But they were relatively optimistic about the economy’s forward momentum, and look forward to implementation of the policies announced during the annual session of China’s top legislature.”

Tiff Macklem will have his first meeting as BoC governor today. BoC is widely expected to keep interest rate unchanged at 0.25%. The unconventional monetary policy, i.e.: QE, will also remain the same. Given the disappointing GDP and inflation data, the accompanying statement will maintain a cautious tone, with the pledge to extend the stimulus if needed to return inflation to the range of 1-3%. Also, there will be no economic projections nor press conference. More in New BOC Governor to Carry On Legacy, Keeping Rate and QE Intact. 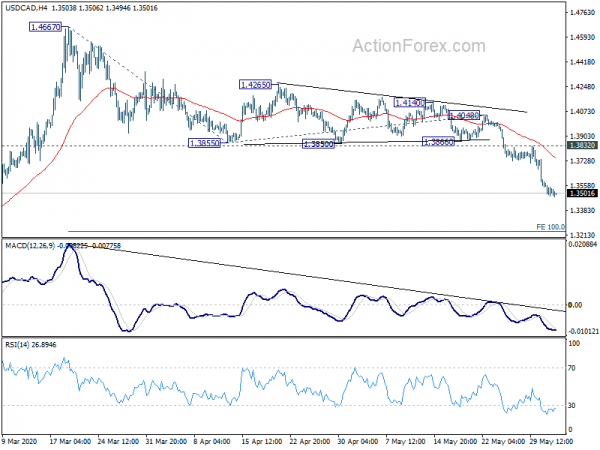 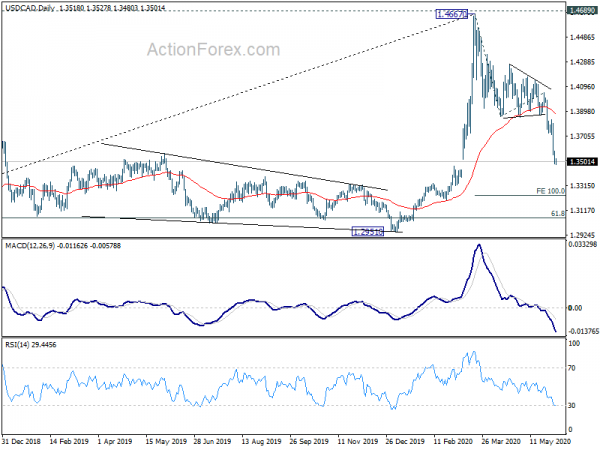