Stock markets are generally mixed today as NASDAQ seems unstoppable. But other indices, in Asia, Europe and even US look sluggish. OECD noted the equal probability of having a second wave of coronavirus spread or not. But that’s largely ignored by investors. In the currency markets, Dollar is back under pressure ahead of FOMC, trading as the worst performing one. It’s followed by Canadian Dollar and then Euro. Australian Dollar and Swiss Franc are the strongest ones for now. 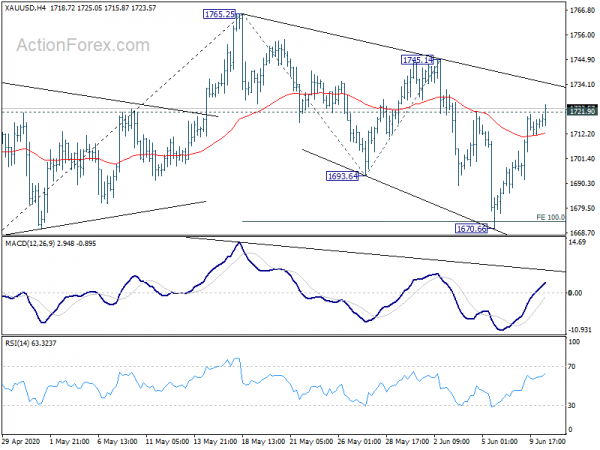 FOMC meeting is the major focus for today and there is no doubt that Fed will keep policy unchanged. Federal funds rate target will be held at 0.00-0.25% while the QE-without-limit program will be maintained. A major focus will be on the first update to economic projections since last December. In particular, the expected strength of recovery in H2 would be revealed, as well as the time frame for the economy to go back to pre-crisis level. Given the strong May non-farm payroll report, there might be some pleasant surprise to the unemployment projections. Meanwhile, inflation forecasts could be off the mind of traders for now.

Fed’s view on the economy will be heavily tied to its projected path of emergency stimulus exit. It’s still too early to call for an end of the stimulus for now. But eventually, Fed needs to lay down the conditions, and possibly the time frame. Unemployment rate has improved while stock markets are at record high, while economy is gradually reopening. Fed might hint on ending some of the lending program at least. This would be the second focus.

The third focus would be on any information regarding “yield curve control”. WSJ reported over the weekend that officials are debating on whether to reinforce low-rate pledge with yield caps at the long-end. That could be seen as a way to keep long-term rates low, and help the economy to transit as Fed moves out from the current emergency measures at a later stage. Fed Chair Powell might reveal some information on his ideas.

OECD outlined two “equally probable scenarios” for the world economy in a report released today. In the “single-hit scenario”, second wave of coronavirus pandemic is avoided. Global economic activity would fall -6% in 2020, with unemployment rates jumping to 9.2%, up from 5.4% in 2019. “living standards fall less sharply than with a second wave but five years of income growth is lost across the economy by 2021”.

In the “double-hit scenario”, a second wave of infections hits before year-end. A renewed outbreak of infections would trigger a return to lock-downs. World economic output would plummet -7.6% this year, before climbing back 2.8% in 2021. OECD unemployment rate would nearly double to 10% with little recovery in jobs by 2021.

ECB Muller: Additional increase in PEPP might not be needed

ECB Governing Council member Madis Muller said the central bank might not need to boost the crisis asset purchases. He said, “if in the second half economic growth in general recovers as the ECB forecasts and the inflation outlook doesn’t worsen additionally, then I think an additional increase in asset purchase program isn’t needed.”

He emphasized, “we have to remember that the pandemic emergency purchase program is meant as temporary, to get over the most acute phase of the crisis.” Also, “inflationary expectations for the near term are very low but I see this as a rather short-term risk that is also affected by the recent sharp decline in energy prices,” Muller also said.

Separately, another Governing Council member Peter Kazimir said the PEPP expansion as announced in the last meeting was to minimize deflation risks. “I wish we could talk about a specific date as to when to end it,” he added. “I wish it were as soon as possible.”

Australia Westpac-Melbourne Institute consumer sentiment rose 6.3% to 93.7 in June, up from May’s 88.1. Confidence is now “back around pre-COVID levels”, and has recovered “all of the extreme 20% drop” seen after the pandemic exploded. It’s been buoyed by the country’s “continued success” in bringing the coronavirus control and further easing of restrictions. The index is now just 2% below the average between September and February.

Westpac said that the survey would “boost confidence” around the RBA board table as they meet again on July 7. RBA Governor Philip Lowe has been clear that he’s having a wait-and-see approach on monetary policy. Negative rate is “extraordinarily unlikely”. “An earlier than expected recovery in the economy will ease pressure on that current entrenched policy stance”.

EUR/USD’s breach of 1.1383 temporary top suggests that rise from 1.0635 is resuming. Intraday bias is back on the upside for 1.1496 resistance next. Decisive break there will carry larger bullish implications. On the downside, break of 1.1241 support will now indicate short term topping, and turn bias to the downside. 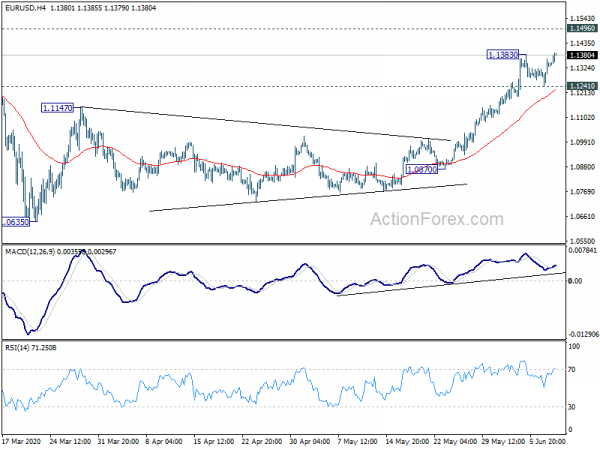 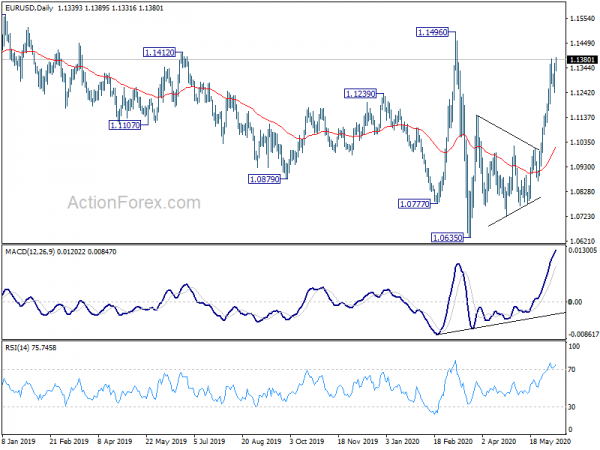