Markets continue to trade in rather indecisive mode today. DOW futures point to mildly lower open, following European stocks, and is getting not support from solid ADP job data. Yen appears to be rebounding but it’s kept well above near term resistance level against others. Swiss Fran, on the other hand, is paring some of this week’s gain, but Euro is even weaker for no apparent reason, other than cross selling against other Europeans. Overall, major pairs and crosses are bounded inside last week’s range. Breakout is awaited, hopefully triggered by ISM manufacturing and FOMC minutes.

Technically, EUR/USD’s range of 1.1168/1.1348 remains a focus for now. We’re slightly preferring downside breakout but let’s see. EUR/CHF’s breach of 1.0623 support is already a sign of Euro weakness. Break of 0.9175 support in EUR/GBP and 119.31 support in EUR/JPY will be further proof. These would be the levels to watch for now.

“Small business hiring picked up in the month of June,” said Ahu Yildirmaz, vice president and co-head of the ADP Research Institute. “As the economy slowly continues to recover, we are seeing a significant rebound in industries that once experienced the greatest job losses. In fact, 70 percent of the jobs added this month were in the leisure and hospitality, trade and construction industries.”

BoE policymaker Jonathan Haskel said in a speech that “current stand of monetary policy is appropriate”. But, “on balance risks are to the downside”. He added that a second wave of coronavirus pandemic would be a “statement about public health”. BoE’s job would be to “respond to the prospective economic consequences”, depending on factors including fiscal reactions and other countries situations.

He also noted “worryingly the indicators of rising unemployment are already revealing themselves with unemployment claims recorded to date enough to put us back to levels of unemployment not seen since the financial crisis. Furthermore there remains a great deal of uncertainty as to how many of the currently furloughed workers will be able to return to their jobs, which in large part will depend on our success as a nation managing and suppressing the virus, and the state of household finances and consumers’ appetite for resumption of discretionary economic activity.

UK PMI Manufacturing was finalized at 50.1 in June, up from May’s 40.7. The 9.4 pts month-on-month rise was the largest on record. But the headline reading indicates a stabilization only, not marked improvement. Also, employment fell for the fifth successive month.

Rob Dobson, Director at IHS Markit: “June completed a marked turnaround in momentum in UK manufacturing… The planned loosening in COVID-19 restrictions on the 4th July should aid further gains in coming months. Although the trend in new export business remains weak, that should also strengthen as global lockdowns and transport constraints ease further.

“The main focus is now shifting towards the labour market. Concerns are rising about the potential for marked job losses, especially once the phase out of government support schemes begins. The news on that footing is less positive, with June seeing a further reduction in staffing levels and, although easing sharply since April’s record, the rate of job loss remains among the steepest in the 29-year survey history. Economic conditions will need to improve markedly across the UK, or some support retained, if the labour market downturn is to avoid becoming more entrenched through the remainder of the year.”

ECB Executive Board member Fabio Panetta said “the euro area has so far weathered the consequences of the shock about as well as could be expected.” “Positive indications need to be taken with a pinch of salt, since the high levels of prevailing uncertainty make it difficult to rely on past regularities.”

Separately, Vice President Luis de Guindos said the central bank is ready to adapt its policy to meet the needs of EU after the coronavirus pandemic. However, “the main antidote will not be monetary policy – which we will conduct, knowing that we are not omnipotent – but rather reforms and budgetary policy of single governments.” He added that the impact of the pandemic would have been more contained had EU been more integrated at economic and monetary levels.

Chris Williamson, Chief Business Economist at IHS Markit said: “The final PMI numbers for June add further to signs that the eurozone factories are seeing a strong initial recovery as the economy lifts from COVID-19 lockdowns. The rise in the June survey is indicative of output falling at an annual rate of just 2%. That compares with a near 30% rate of contraction seen at the height of the lockdowns in April. This remarkable turnaround implies very strong month-on-month gains in the official production numbers for the past two months. Expectations for the year ahead have also rebounded sharply as hopes grow that the economy will continue to find its feet again in the coming months.

“However, even with these gains, production and sentiment remain below pre-pandemic peaks, and persistent weak demand combined with ongoing social distancing measures are likely to act as a drag on the recovery. The focus therefore now turns to whether gains seen in the past two months can be built on, or if momentum fades again after this initial rebound.”

Japan PMI Manufacturing was finalized at 50.1 in June, up from May’s 38.4. Markit noted that firms still operate full capacity due to slow-moving order books. Export demand declines as coronavirus disruptions linger on. But business confidence rebounds into positive territory.

Joe Hayes, Economist at IHS Markit, said: “The chance of a V-shape recovery in the manufacturing sector appears slim at this stage, which opens up the possibility of a two-speed economy if the domestic-focused service sector shows more signs of activity.”

Australia AiG Performance of Manufacturing Index rose 9.9 pts to 51.5 in June, back into expansion region. AiG said that this only “indicates an improvement from the depths of April and May, rather than a recovery to buoyant conditions”. Also, “almost all of the improvement in June was concentrated in the large food and beverages sector”.

From New Zealand, building permits rose 35.6% mom in May.

China Caixin PMI Manufacturing rose to 51.2 in June, up from 50.7, beat expectation of 50.5. Markit said output expands again as sector continues to recover from the coronavirus crisis. Total new work increases for the first time since January, but external demand remains subdued.

Wang Zhe, Senior Economist at Caixin Insight Group said: “Around mid-June, the epidemic flared back up in some parts of China, but its impact on the overall economy was limited. The gauge for future output expectations continued to rise in June, reflecting manufacturers’ confidence that there would be a further relaxation of epidemic controls and a normalization of economic activities.” 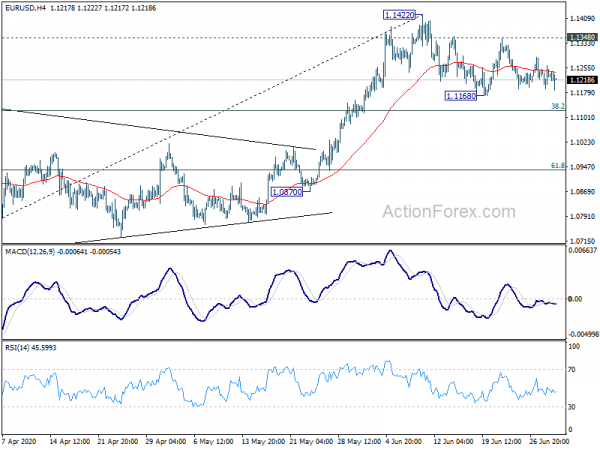 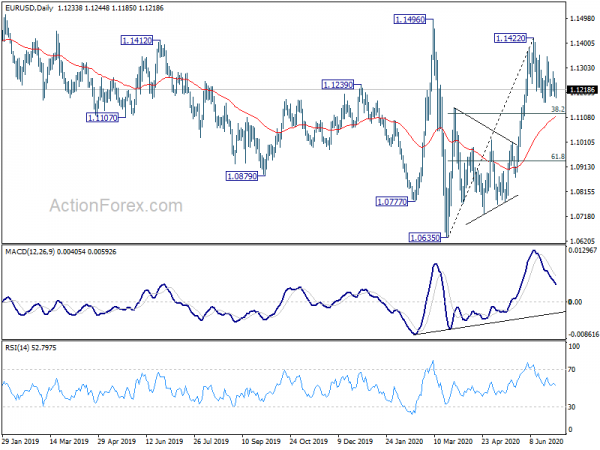