Markets are in mild risk-off mode today but losses are so far limited so far. Dollar attempts for a rebound but upside is so far limited. The greenback is somewhat outshone by Sterling, which is regaining so strength, in particular against Euro and Yen. Australian Dollar is currently the worst performing one as its second largest city Melbourne is back in coronavirus lockdown. Yen is the second weakest, suggesting that overall sentiments aren’t too bad yet.

In the Summer Economic Forecasts released today, European Commission projects a deeper recession in Eurozone and EU in 2020, due to coronavirus pandemic. Because “lifting of lockdown measures is proceeding at a more gradual pace than assumed” in the Spring forecast, impact on the economy will be “more significant than anticipated. 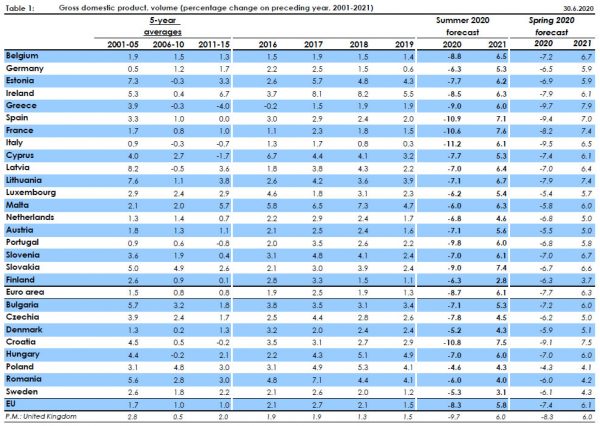 Valdis Dombrovskis, Executive Vice-President for an Economy that works for People, said: “The economic impact of the lockdown is more severe than we initially expected… If anything, this forecast is a powerful illustration of why we need a deal on our ambitious recovery package, NextGenerationEU, to help the economy.”

Paolo Gentiloni, Commissioner for the Economy, said: “The policy response across Europe has helped to cushion the blow for our citizens, yet this remains a story of increasing divergence, inequality and insecurity. This is why it is so important to reach a swift agreement on the recovery plan proposed by the Commission – to inject both new confidence and new financing into our economies at this critical time.”

Japan labor cash earnings dropped -2.1% yoy in May, well below expectation of -1.1% yoy. That’s also the steepest decline since the -2.8% fall recorded back in June 2015. A labor ministry official was quoted by Reuters saying that “the impact from the coronavirus led to a reduction in overtime pay which caused real wages to fall a lot.”

Household spending dropped -16.2% yoy, also much worse than expectation of -12.2% yoy. That’s a record decline since comparable data first became available in January 2001. It also followed a prior record of -11.1% yoy decline reported a month ago in April. Leading indicator rose to 79.2 in May, up from 77.7, missed expectation of 79.5.

RBA kept monetary policy unchanged as widely expected. The cash rate is held at 0.25% and target of 3-year AGS yield at 0.25% too. The central bank also pledged to maintain the accommodative approach for “as long as it is required”. Also, “the Board will not increase the cash rate target until progress is being made towards full employment and it is confident that inflation will be sustainably within the 2–3 per cent target band.”

RBA also said the employment conditions have “stabilised” recently and the economic downturn has been “less severe than earlier expected”. However, the “nature and speed” of economic recovery remains “highly uncertain”. Uncertainty is also ‘affecting consumption and investment plans”. The pandemic is prompting many firms to “reconsider their business models”.

Australia AiG Performance of Services Index dropped -0.1 to 31.5 in June. The reading indicates “another serious contraction in activity” at a pace similar to May. That’s also the second lowest record reading next to April’s. Looking at some details, all indicates remains firmly below series average despite lockdown easing. In particular, employment dropped a further -4.3 pts to 30.9.

NZIER Quarterly Survey of Business Opinion showed a net 37% of businesses reported decline in activity during Q2. That’s the worst level since March 2009 due to tight trading restrictions under Alert Level 4 lockdown. Also, a net 25% of businesses expect weaker demand in Q3.

There was a slight improvement in headline business confidence, from -70 to -63. But the reading suggests that businesses remain pessimistic over the coming months, and they could be holding off on major spending decisions. Pre-election uncertainty is compounded by how the coronavirus pandemic will play out. 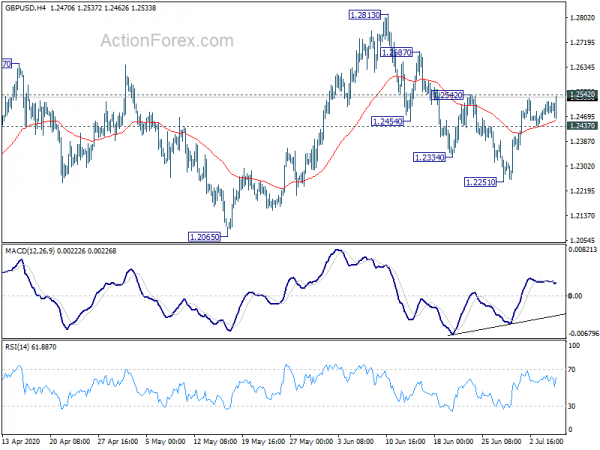 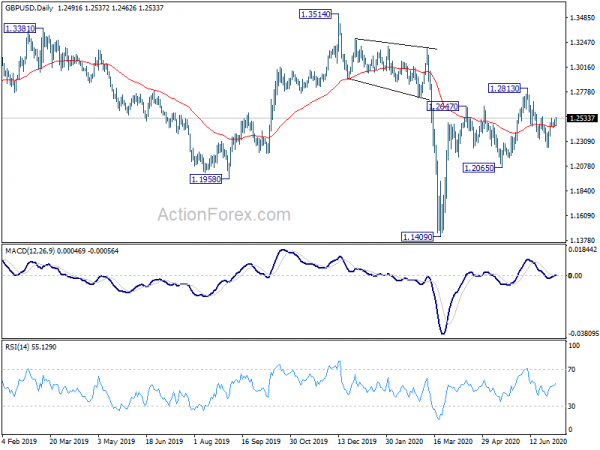