Technically, we’d believe that if Dollar is to stage a strong rebound, it should happen soon. EUR/USD is close to 1.1496 key medium term resistance. AUD/USD is also pressing 0.7031/7064 key resistance zone too. But the development doesn’t favor a comeback of the greenback, with USD/CAD back pressing 1.3490 near term support. Similar, USD/JPY is also pressing 106.63 support level. There is prospect of deeper fall in both USD/CAD and USD/JPY for the near term. In any case, we should find out which way is the way for Dollar soon.

UK unemployment rate unchanged at 3.9% in May

ONS noted: “The relative flatness of the unemployment figures may seem surprising, given that there are notable decreases in the number in employment. However, some initial exploratory analysis has suggested that a larger than usual proportion of those leaving employment are not currently looking for a new job and therefore becoming economically inactive, rather than unemployed.”

Claimant counts dropped -28.1k in June, versus expectation of 250k rise. Nevertheless, since March, the claimant count has increased 112.2%, or 1.4m.

Prime Minister Scott Morrison unveiled today a new AUD 2B JobTrainer plan aimed at reskilling and upskilling Australians. He said, the program “doesn’t just support those who have left the workforce through no fault of their own, but that also is supporting school leavers as well at the end of this year.”

AUD/JPY weakens mildly after the release but stays above 4 hour 55 EMA. We’re viewing the sideway price actions from 72.52 as the second leg of the pattern form 76.78 high only. That is, we’d expect at least another decline before the pattern completes. Break of 73.98 support should target 72.52 and below.

The data suggests that inflation could move back to target slower than RBNZ is expecting. The development reaffirms the easing case for the central bank ahead. It’s generally expected to expand the asset purchase program in the coming months. As RBNZ is also preparing the financial system for, negative rate is still a likely option to be adopted next year.

Fed’s Beige Book economic report noted that “economic activity increased in almost all Districts, but remained well below where it was prior to the COVID-19 pandemic.”

Looking at some details, consumer spending “picked up” while retail sales “rose”, but was “far below year-ago levels”. Manufacturing activity “moved up” in most districts, from a “very low levels”.

Employment “increased on net in almost all districts”, but payrolls in all districts were “well below pre-pandemic levels”. Prices were “little changed overall”.

ECB rate decision is a major focus today. It’s widely expected to keep the main refinancing rate unchagned at 0.00% and the deposit rate at -0.50%. President Christine Lagarde might acknowledge the consumption drive improvement in the economy since last meeting. Yet, the overall tone would remain cautious, highlighting the high uncertainty and downside risks to economic outlook. Also, ECB would reiterate the commitment to maintaining “substantial monetary policy stimulus”. More in ECB Preview – Sounding Cautiously Optimistic on Economic Recovery.

GBP/USD retreats mildly after failing break through 1.2669 temporary top. Intraday bias remains neutral first. On the upside, break of 1.2669 will resume the rebound from 1.2251 to 1.2813 high next. On the downside, though, break of 1.2480 minor support will turn bias to the downside for retesting 1.2251 support. 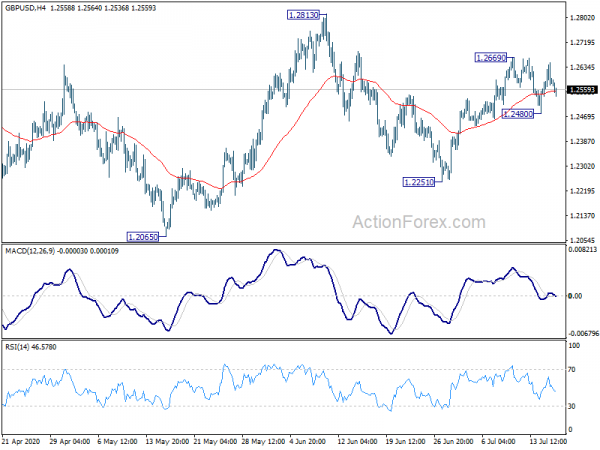 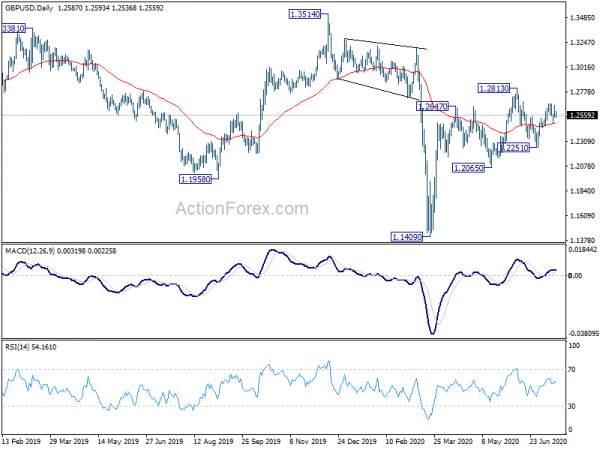 RBNZ Meeting: Shooting the Kiwi Down