Aussie Surges as RBA Said No to Intervention, Euro Softens on Profit Taking

Euro weakens somewhat today after EU finally reached an agreement on the recovery fund. Traders seem to be taking some profits as expectations become news. Though, New Zealand Dollar is even weaker, partly thanks to cross selling, especially against Aussie. Canadian and Aussie are the strongest ones on risk-on sentiments. Asian markets are generally higher following the record close in NASDAQ overnight. Aussie is given additional boost as RBA Governor rules out negative rates and intervention.

Technically, a focus today is whether EUR/USD would turn into a deeper pull back, ahead of 1.1496 key medium term resistance. Focus would be on 1.1370 minor support and break would be an indication of short term topping. But the tide is not so much on Dollar’s side as Gold broke 1817.91 resistance to resume recent up trend. AUD/NZD’s rise today further affirm that correction from 1.0880 has completed with three waves down to 1.0565. Further rise is now in favor to retest 1.0880. That might give AUD/USD additional fuel to power through 0.7064 key resistance. 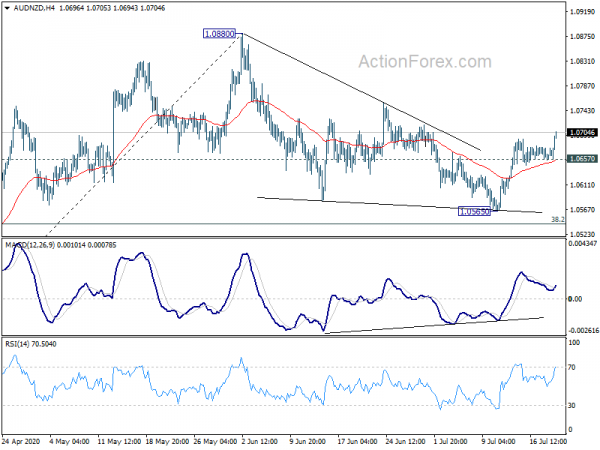 EU leaders finally agreed on the landmark EUR 750B stimulus package after four days of marathon negotiations in Brussels. The package, funded by joint debt, would give out EUR 390B of grants and EUR 360B of low-interest loans to member states for post pandemic recovery.

“This agreement sends a concrete signal that Europe is a force for action,” Charles Michel, president of the EU leaders’ council, said at a press conference afterward. “It is about a lot more than money. It is about workers and families, their jobs, their health and their well-being. I believe this agreement will be seen as a pivotal moment in Europe’s journey, but it will also launch us into the future.”

RBA Lowe: Negative rates and FX intervention are not directions to head in

RBA Governor Philip Lowe reiterated in a speech that “there has been no change to the Board’s view that negative interest rates in Australia are extraordinarily unlikely”. Negative interest rates would come with costs and causes “stresses in the financial system”. They would also “encourage people to save more rather than spend more”. It’s “not a direction we need to head in”.

Meanwhile, there is evidence that Australian Dollar’s exchange rate is “broadly in line with its economic fundamentals”. Foreign exchange market intervention would have “limited effectiveness” and involve “substantial financial risks to the public balance sheet and complicate international relationships. Hence, “this too is not a direction we need to head in”.

On the economy, he said “fortunately, we have now turned the corner” in the labor market. Many firms heavily affected by the coronavirus shutdowns are now “rehiring and lifting hours” as restrictions are eased in most of Australia. However, in some sectors like construction and professional services, the pipeline of work is “drying up” as new orders have declined. Hours worked in these businesses will decline further ahead.

Lowe expected unemployment is likely to “increase further, even with the recovery underway”. Many people who lost they job will “start looking for jobs” and thus be classified as rejoining the labor force. That will push up the measured unemployment rate, like what happened with June’s figures. One of the keys to returning to a strong labor market is “restoring confidence”.

Japan CPI core rose to 0% in Jun, out of negative region

The pickup in CPI core out of negative territory suggests that impact of free fall in energy prices earlier this year started to fade. There could also be some stabilization effect as the nationwide state of emergency was lifted in late May. Yet, there is little chance of a strong rebound in inflation, nor the economy, as external and domestic demand remain weak with coronavirus pandemic dragging on.

ECB Executive Board member Isabel Schnabel told Spanish newspaper Expansión that there is “typically less activity in both the primary and secondary markets during summertime. That’s one reason why the monthly volume of ECB’s asset purchases may drop. She suggested investors not to read too much into the lower bond purchases in recent weeks.

She also noted that “as long as we remain in the baseline scenario of our projections, it’s likely that the envelope (of asset purchases) will be used in full.”

EUR/USD is losing some upside momentum as seen in 4 hour MACD. Intraday bias is turned neutral first with focus on 1.1496 key resistance. On the upside, sustained break of 1.1496 will carry larger bullish implications and target 61.8% projection of 1.0774 to 1.1422 from 1.1168 at 1.1568 next. On the downside, break of 1.1370 minor support will suggest rejection by 1.1496. Intraday bias will be turned back to the downside for 1.1168 support. Decisive break there will indicate near term bearish reversal. 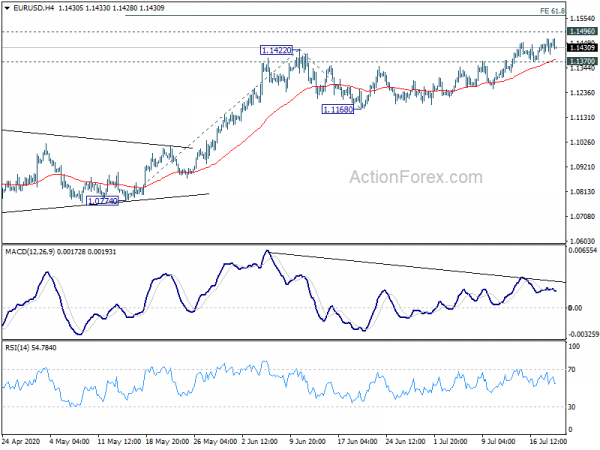 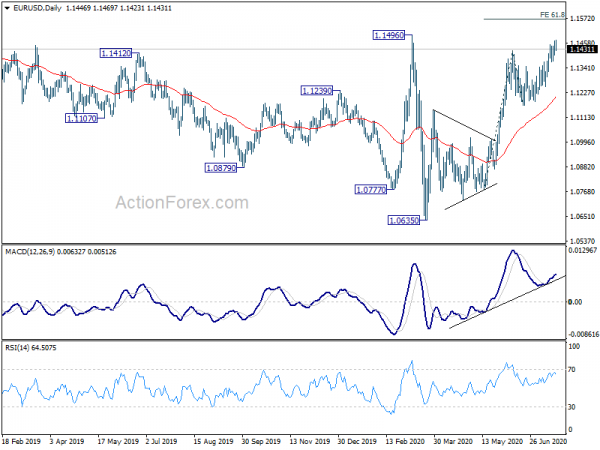