Yen rises generally today, together with Swiss Franc, in rather subdued consolidative markets. Stocks are trading mildly lower but there is hardly any following selloff for now. Much volatility is seen in Gold and Silver, while retreat notably after initial spike. But both are contained above near term support level so far. Back in the currency markets, commodity currencies are trading lower together with Euro, with New Zealand Dollar leading the way. Dollar is mixed, awaiting tomorrow’s FOMC rate decision and press conference.

Technically, current retreats in gold and silver are viewed as near term consolidations only. Though, break of 1899.51 support in gold and 22.24 support in silver will suggest deeper correction is underway. AUD/NZD is a pair to watch with Australian CPI featured in the upcoming Asian session. The rebound from 1.0565 looks resume today resume after drawing support form 4 hour 55 EMA. Break of 1.0754 resistance will target a test on 1.0880 high. 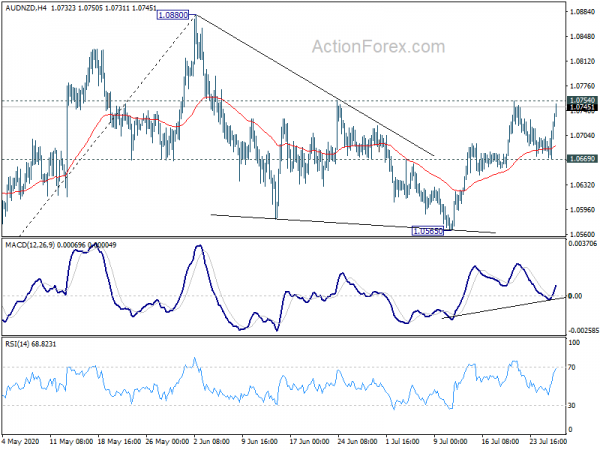 ECB asks banks not to pay dividends till end of 2020

ECB announced today to extend “the end of the period in which we recommend that banks should not pay dividends or buy back shares from October 2020 until the end of the year.”

Andrea Enria, Chair of the Supervisory Board of the ECB, said in a blog post: “The current macroeconomic shock is of unprecedented magnitude and it is still highly uncertain how it will develop in the future, including its eventual impact on the banking sector…. the economic outlook remains contingent on too many uncertain variables, including a possible strong resurgence of infections accompanied by more stringent containment measures.”

“In the extraordinary circumstances created by the pandemic, all our supervisory measures and actions are and will continue to be aimed at ensuring that the banking sector can remain resilient and support the economic recovery with an adequate supply of credit.”

BoE’s Prudential Regulation Authority (PRA) said it will asset whether to extend the suspension on bank payouts like dividends and share buyback beyond the end of the year. The statement came after ECB’s decision.

PRA reiterated the decision to suspend dividends, share buybacks and cash bonuses back in March was “a sensible precautionary step given the unique role of banks in supporting the wider economy through the period of economic disruption.” PRA will “undertake its assessment of firms’ distribution plans beyond the end of 2020 in Quarter 4 2020.” ”

The assessment will be based on the current and projected capital positions of the banks and will take into account the level of uncertainty on the future path of the economy, market conditions, and capital trajectories prevailing at that time.”

UK CBI realized sales rose to 4 in July, up from -37. That is, sales were “broadly flat” in the year to July after three months of sharp declines. Nevertheless, sales expected to dip slightly in August, with reading at -5.

Rain Newton-Smith, CBI Chief Economist, said: “The re-opening of non-essential retail was a vital step towards recovery but isn’t a cure-all. The Government has provided critical support for firms and jobs throughout the crisis. But ongoing financial pressures are a major challenge for some retailers, and additional direct support to shore up cash flow, such as extension of business rates relief, should be considered.”

“We have seen rises in the last two months following the sharp drop of over 35,000 jobs that occurred in April, when the full COVID-19 lockdown was in place,” economic statistics manager Sue Chapman said. “While job numbers have recovered somewhat in May and June, they are still below pre-COVID levels. Filled job numbers in March and June are usually quite similar, but for this year June is nearly 20,000 jobs lower than March.”

Rating agency Fitch said it affirmed China’s Long-Term Foreign-Currency Issuer Default Rating (IDR) at ‘A+’ with a Stable Outlook. It said the ratings are “supported by the country’s robust external finances, a track record of strong macroeconomic performance and size as the world’s second-largest economy”. But the ratings are “primarily constrained by large structural vulnerabilities in the financial sector, relatively lower per capita income, and weaker government metrics than those of ‘A’ peers”.

Fitch also said China’s economy is “now staging a remarkable recovery”. It forecasts real GDP growth of 2.7% in 2020, revised up by previous estimate of 1.2%. It’s baseline assumes growth will temporarily accelerate to 7.5% in 2020, the slow back to estimated trend rate of 5.5% in 2022.

Fitch also noted the the sharp escalation of geopolitical tensions between China and “a number of major economies”, “across a spectrum of issues”. The tensions “will persist” but they have not had an impact of credit fundamentals in the short term.

USD/JPY’s decline resumes after brief recovery and intraday bias is back on the downside. Current fall is part of the decline from 111.71 and should target 100% projection of 111.71 to 105.98 from 109.85 at 104.12 next. On the upside, above 105.68 minor resistance will turn intraday bias neutral again and bring consolidation. But overall, near term outlook will stay bearish as long as 106.63 support turned resistance, in case of recovery. 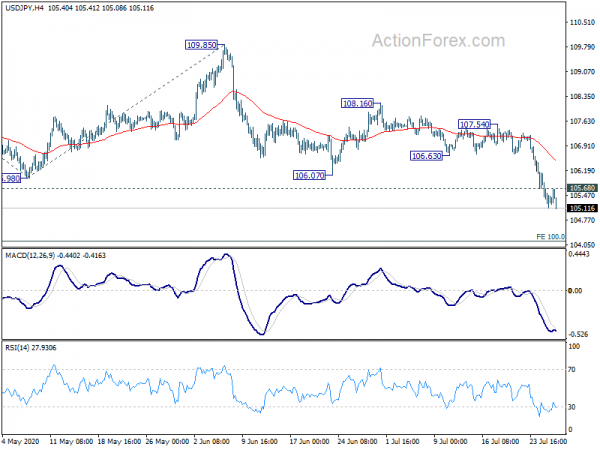 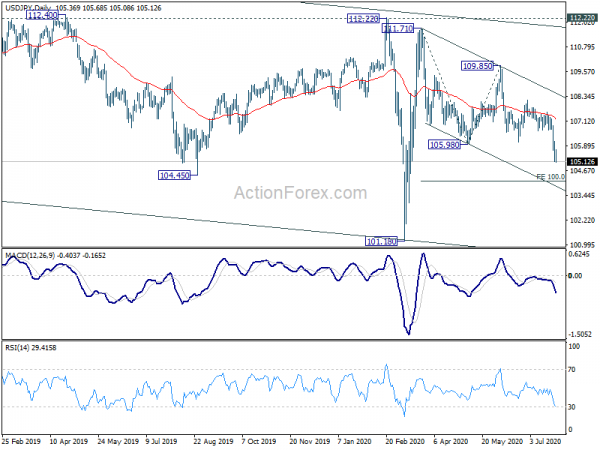