Trading in forex markets is rather subdued today in overall mixed mood. Better than expected manufacturing data provides little lift to sentiments. Coronavirus curfew in Australia’s Victoria state is also shrugged off. Instead, traders are generally cautious ahead of a very busy week. RBA and BoE will meeting while tons of heavy weight data like US ISMs and non-farm payrolls will be featured.

Technically, an immediate focus would be on whether Dollar could finally turn around the corner and has a sustainable rebound. USD/JPY has already breached 106.07 resistance, so did USD/CHF on 0.9151 minor resistance. Eyes will now be on 1.1698 minor support in EUR/USD, 1.3013 minor support in GBP/USD, as well as 0.7063 minor support in AUD/USD. Additionally, 1939.20 support in Gold will also be watched.

Australia AiG manufacturing rose to 53.5, but headwinds lie ahead

Australia AiG Performance of Manufacturing Index rose 2.0 pts to 53.5 in July, indicating a “more convincing expansion”. Manufacturing has now “landed in positive territory” for two straight months for the first time since October 2019. Six of the seven activity indices but exports deteriorated by -5.8 to 41.4, staying gin contraction. Also, four of six sectors stayed in contraction in trend terms, except food & beverages and machinery & equipment.

Ai Group Chief Executive Innes Willox said: “Against the positive signs from the manufacturing sector, the winding down of stimulus from September, the impact of the Melbourne lockdown and the severity of the outbreak, as well as tougher border restrictions are likely to weigh on the sector in coming months”.

Australia Frydenberg: Coronavirus lockdown a real kick in the guts to Victorian businesses

Australian Treasurer Josh Frydenberg said Victoria is now “at war” after the state imposed stage four lockdown over the weekend, as coronavirus numbers stayed high. He said, “this is a real kick in the guts to Victorian businesses, which will have an impact on employment.

Frydenberg expected the overall impact of the pandemic to the economy to be larger than prior estimate of AUD 3.3B. “Obviously that 3.3 billion number was not based on stage 4 restrictions, nor was it based on restrictions being right across the state,” he said. “I will make that number available when it comes to me, but clearly this is going to hit the Victorian economy which makes up around a quarter of the national economy, and this will obviously impact on the consumer and business confidence more broadly.”

China Caixin PMI Manufacturing rose to 52.8 in July, up from 51.2, beat expectation of 51.3. Caixin said the data “signal a further improvement in the health of China’s manufacturing economy”. Also, “operating conditions have now improved in each of the past three months, with the latest upturn the strongest since January 2011.”

Wang Zhe, Senior Economist at Caixin Insight Group said: “Overall, flare-ups of the epidemic in some regions did not hurt the improving trend of the manufacturing economy, which continued to recover as more epidemic control measures were lifted. The supply and demand sides both improved, with relevant indicators maintaining strong momentum. However, we still need to pay attention to the weakness in both employment and overseas demand.”

Minneapolis Fed President Neel Kashkari told CBS in an interview that the only way to have a “real robust economic recovery” is through “clamping back down” the coronavirus cases to keep things under control, or “getting a vaccine or a robust therapy”. Otherwise, “we’re going to have flare ups, lockdowns and a very halting recovery with many more job losses and many more bankruptcies for an extended period of time unfortunately. ”

“If we were to lock down hard for a month or six weeks, we could get the case count down so that our testing and our contact tracing was actually enough to control it,” Kashkari added. “If we don’t do that, and we just have this raging virus spread throughout the country with flare-ups and local lockdowns for the next year or two, which is entirely possible, we’re going to see many, many more business bankruptcies.”

RBA and BoE to stand pat, US ISMs and NFP lead busy calendar

Two central banks will meet this week. RBA is widely expected to keep cash rate, as well as 3 year bonds yield target at 0.25%. Officials had signaled that there was no need to adjust the package of policy measures in the “current environment”. Yet, firstly, there was resurgence in coronavirus outbreak in Victoria which led to stage four lockdown and curfew. Secondly, tensions with its major trading partner continued to increase. We’ll have to see if RBA starts to turn more cautious as the environment has somewhat changed.

BoE is also expected to keep benchmark rate unchanged at 0.1%, and asset purchase target at GBP 745B. Recent economic data from the UK showed that the economy is on track to recovery. Chief economist Andy Haldane also said earlier that the bounce back has been a “V”. While the tone of the statement would remain cautious, BoE could indicate that it’s prepared to keep policy as is for now, to wait for further developments.

On the economic data front, the schedule is busy, with lots of market moving data release. In particular, US ISMs and NFP, Canada employment, Australia trade balance, retail sales, New Zealand employment, China PMIs, trade balance. Here are some highlights for the week:

Intraday bias in AUD/USD remains neutral at this point. Upside momentum has been clearly diminishing as seen in 4 hour MACD and a short term top should be around the corner. On the downside, break of 0.7063 will turn bias back to the downside for 0.6776, for correcting the whole rise from 0.5506. Nevertheless, above 0.7227 will extend the rally towards 0.7311 long term EMA. 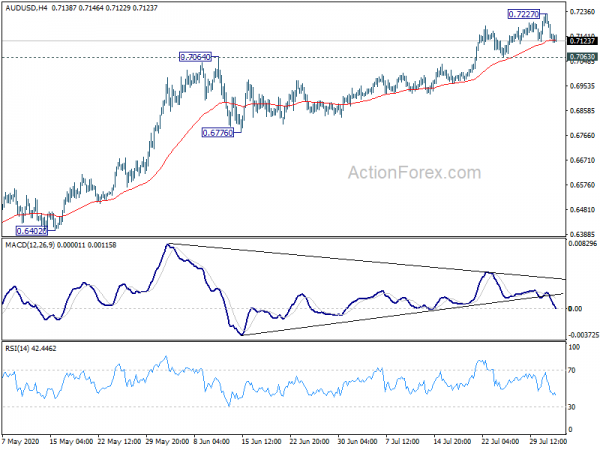 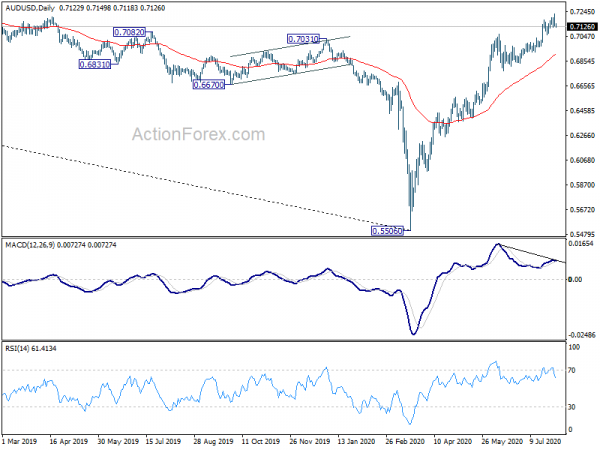