Yen’s rebound continues in relatively quiet trading in Asia. Risk aversion is not apparent as major indices outside of Japan are all in slight black. Instead, Yen traders could be reversing recent shorts as treasury yields pull back. Staying in the currency markets, New Zealand Dollar remains the worst performing one, followed by Dollar. The greenback is looking rather vulnerable against. Australian is also soft even though RBA rules out further easing. On the other hand, Sterling is the firmer one together with Canadian.

Technically, USD/CAD’s break of 1.3191 temporary low suggests that the brief consolidation has completed with fall from 1.4667 resuming. USD/CHF is also pressing 0.9050 temporary low and break will resume larger down trend. USD/JPY’s decline is accelerating downwards, threatening the bullish reversal case. Focus is back on 105.30 support and break would likely resume larger fall through 104.18 low.

Minutes of August 4 RBA meeting showed board members “reaffirmed that there was no need to adjust the package of measures in Australia in the current environment.” Nevertheless, they agreed to “continue to assess the evolving situation” and “did not rule out adjusting the current package if circumstances warranted.”

RBA noted that “the worst of the global economic contraction had passed” but outlook remained “highly uncertain”, depending upon containment of the coronavirus. Australia’s downturn “had not been as severe as earlier expected” and “a recovery was under way in most of Australia”. Though, the recovery is likely “slower than earlier expected” too with outbreak in Victoria.

Reuters Tankan manufacturing index rose to -33 in August, up from -44. While still deeply negatively, the reading was already the best since April’s -30. Further improvement in manufacturers’ mood is expected as they forecast rise to -22 in November.

No manufacturing index also rose slightly to -23, up from last month’s -26, standing at the same level as April’s. However, deterioration is expected ahead, with the index forecast to drop back to -26 in November.

AUD/JPY to break out of triangle soon

AUD/JPY has been trading in a triangle pattern since early June. It should be around time for a breakout. At this point, a break above 76.86 resistance is mildly in favor as long as trend line support (now at 75.58) holds. However, the “thrust” following a triangle breakout is usually short-lived and terminal. Hence, attention would be on signs of a quick reversal in this case.

Meanwhile, sustained break of the trend line support will be the first sign of near term bearish reversal. Focus would then be turned to 74.82 support for confirmation. 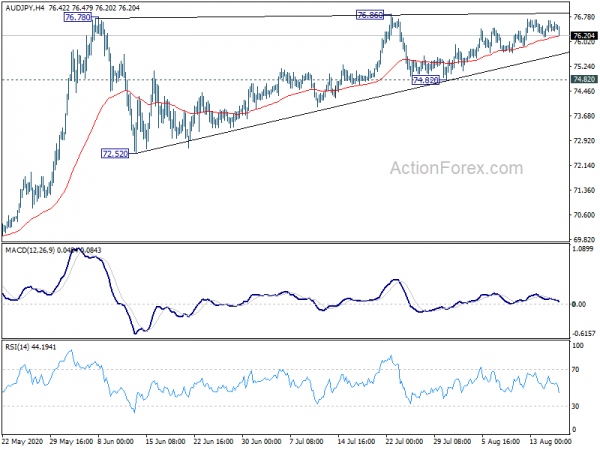 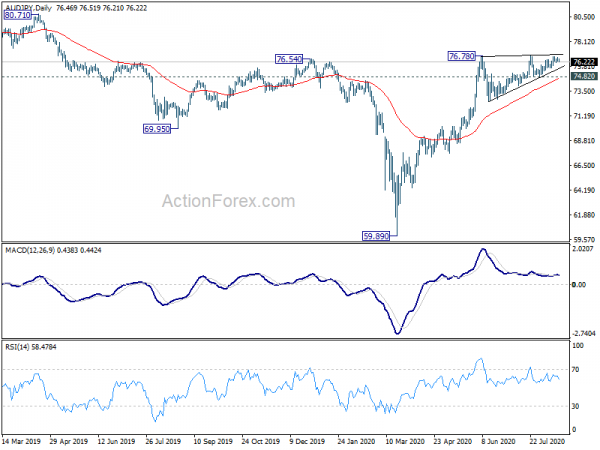 The economic calendar is very light today with US housing starts and building permits as the only featured release.

As the fall from 107.05 accelerates, focus is now back on 105.30 support in USD/JPY. Firm break there will firstly suggests that rebound from 104.18 has completed. More importantly, that would suggest that decline from 111.71 isn’t completed. Intraday bias will be turned back to the downside for retesting 104.18 low. On the upside, though, break of 107.05 resistance will revive the case of bullish reversal and turn bias back to the upside for 108.16 resistance. 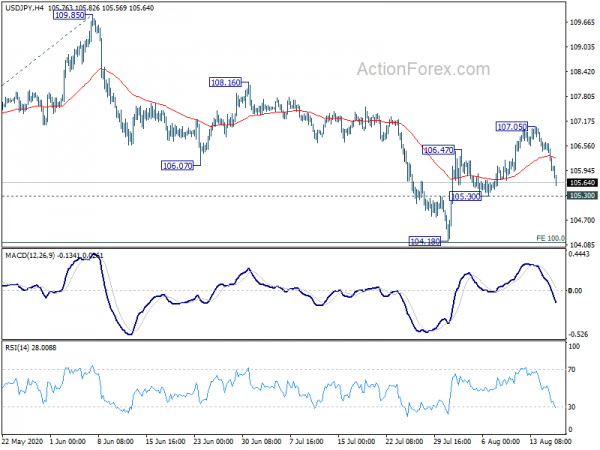 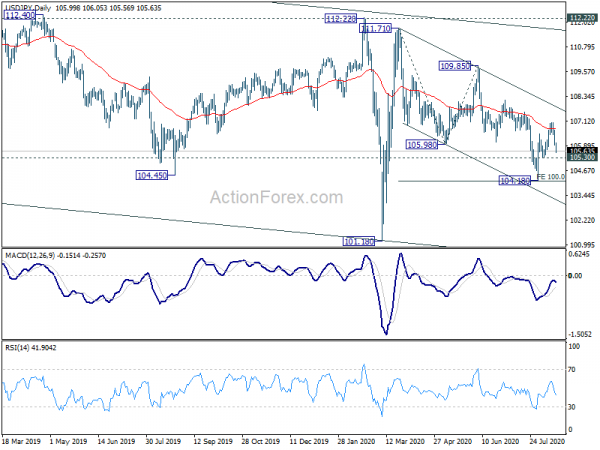