Selling focus turns from Dollar to Swiss Franc today, which also drags down Sterling, and to a lesser extent Euro. Dollar stabilized a little bit but there is apparent strength for recovery yet. In particular, commodity currencies are generally stronger while Canadian Dollar shrugs off weaker than expected inflation data. Attention will turn to FOMC minutes later in the session, which is unlikely to provide anything about the next policy move. Instead, investors would be more eager to know how Fed would shape the results of the year-long strategy review. 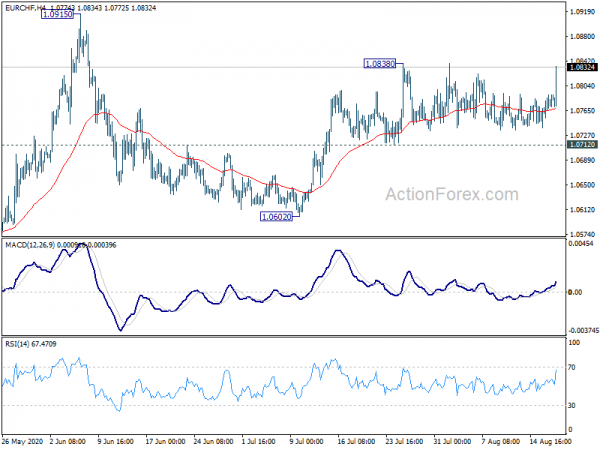 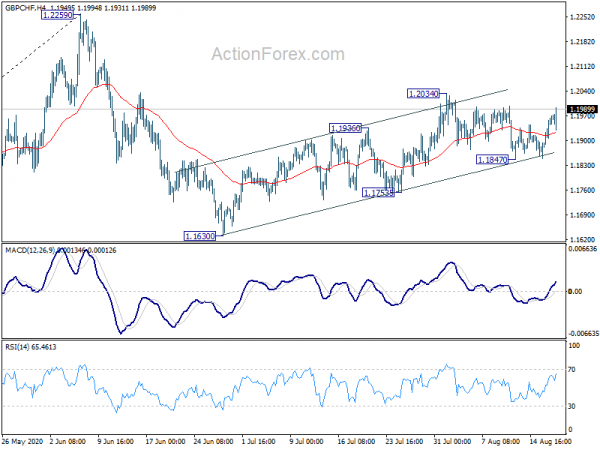 “Additional indicators point to partial upticks in world trade and output in the third quarter, but the strength of any such recovery remains highly uncertain: an L-shaped, rather than V-shaped, trajectory cannot be ruled out,” WTO added.

Canada CPI slowed to 0.1% yoy in Jul, below expectations

StatCan also noted that five of the eight major components rose on 1 year-over-year basis. The slowdown in inflation spans both goods and services, most in transportation component mostly due to air transportation index.

Eurozone CPI was finalized at 0.4% yoy in July, up from June’s 0.3% yoy. The highest contribution to the annual euro area inflation rate came from non-energy industrial goods and services (both +0.42 percentage points, pp), followed by food, alcohol & tobacco (+0.38 pp) and energy (-0.83 pp).

Westpac: Victoria contraction to offset recovery in other Australian states in Q3

Australia Westpac leading index rose slightly to -4.37% in July, up from -4.43%. The six-month annualized growth rate, remained in deep negative territory, consistent with recession. Nevertheless, a bottom was likely already reached in April’s -5.61%, while Q2 was already marked the low point in the growth cycle.

Overall, Westpac expected growth in Q3 to be flat. Victorian economy is expected to contract by -9% due to lockdown, which will offset the recovery in other states. It expects economy to grow 2.8% in Q4, on the assumption that Victoria moves through stage 4 to stage 2 restrictions, while other states could avoid second wave of coronavirus infections.

Westpac expects RBA to keep monetary policies unchanged on September 1. The next major event will be the Commonwealth Budget on October 6.

Intraday bias in USD/CHF is turned neutral with a temporary low formed at 0.9009. Further decline is expected as long as 0.9197 resistance holds. Break of 0.9009 will resume larger down trend. However, considering bullish convergence condition in 4 hour MACD, break of 0.9197 should confirm short term bottoming and turn bias back to the upside for rebound. 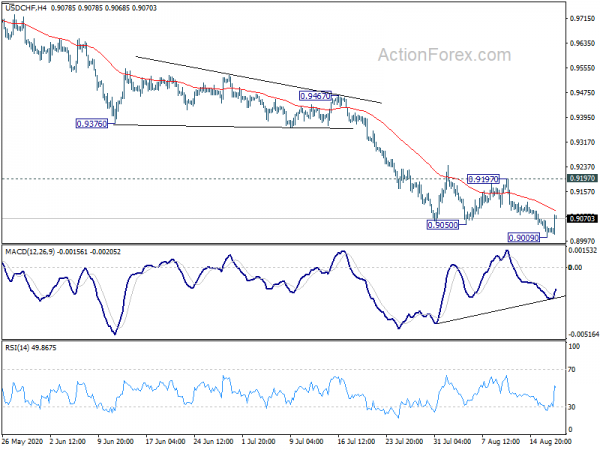 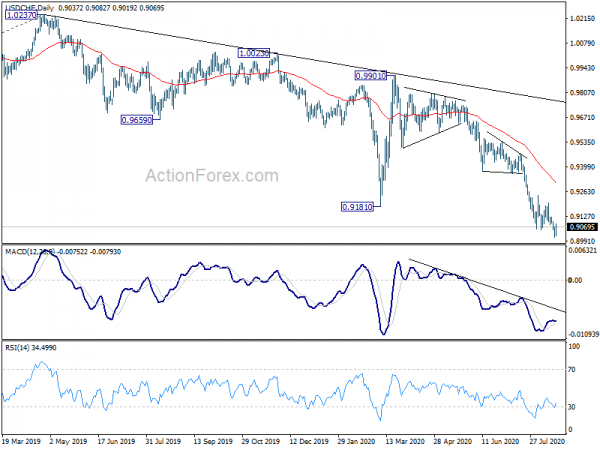