Technically, despite a rather steep spike overnight, WTI crude oil is quickly back above 4 hour 55 EMA. It’s also held well above near term trend line support. Thus, further rally is in favor through 43.38 sooner or later. Yet, upside momentum is weak considering persistent bearish divergence condition in 4 hour MACD. Upside potential could be limited even in case of a breakout. Translating into USD/CAD, the pair might get some strong support from 1.3056 long term fibonacci level, at least on first attempt. 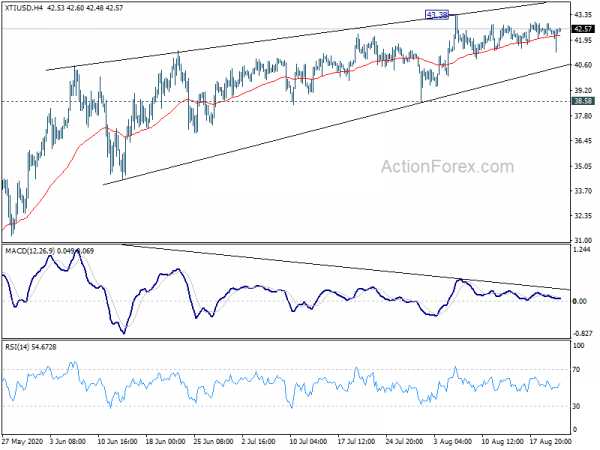 Bernard Aw, Principal Economist at IHS Markit, said: “The prospect of a solid recovery remains highly uncertain as Japanese firms were pessimistic about the business outlook on balance during August. Rising unemployment may also hit domestic household income and spending in the months ahead.”

Outlook for core inflation suggests that Japan is close to, if not already in, a deflationary situation. It’s becoming increasingly unrealistic to achieve BoJ’s 2% inflation target in any projection horizon.

Australia CBA PMI composite tumbled to 48.8, back in contraction

CBA Head of Australian Economics, Gareth Aird said: “The decline in business activity over August is hardly surprising given the lockdown measures in Victoria. With the August composite flash PMI only modestly in contractionary territory it is highly likely that outside of Victoria private output continued to expand over the month”.

“The fall in employment is the inevitable consequence of shutting down large parts of the Victorian economy. Encouragingly, firms collectively retain an optimistic view on the outlook despite the setback in Victoria. Ongoing fiscal support for households and businesses remains critical to ensuring that optimism is not misplaced”.

Australia retails grew in July, except in Victoria

July’s preliminary reading showed retail sales grew 3.3% mom in Australia. Sales rose in all states and territories except Victoria, coinciding with the resurgence of coronavirus cases and reintroduction of stage 3 restrictions.

“The rise across the rest of the country was driven by continued strength in household goods retailing, and the recovery in cafes, restaurants and takeaway food services, and clothing, footwear and personal accessory retailing” said Ben James, Director of Quarterly Economy Wide Surveys.

Joe Staton, GfK’s Client Strategy Director, says: “Employment is now the big issue because the pandemic has ended years of job security. Yes, discounted dinners have proved a winner with hungry consumers across the country this month, but it’s difficult to see significantly increased appetite for other types of spending for now.”

PMIs will be the main focuses for today and will be released from Eurozone, UK, and US. UK will also release retail sales and public sector borrowing. Canada will release new housing price index and retail sales. US will release existing home sales.

Intraday bias in USD/CAD stays neutral for consolidations above 1.3133 temporary low. Outlook stays bearish with 1.3271 resistance intact. Break of 1.3133 will resume the fall from 1.4667 to long term fibonacci level at 1.3056. Nevertheless, considering bullish convergence condition, firm break of 1.3271 should confirm short term bottoming. Intraday bias will be turned back to the upside for rebound to 55 day EMA (now at 1.3448). 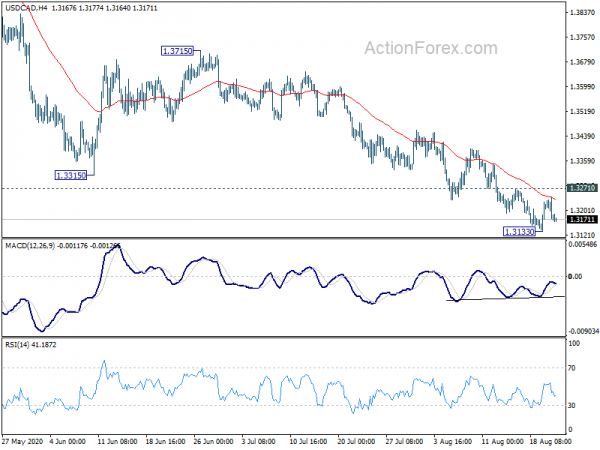 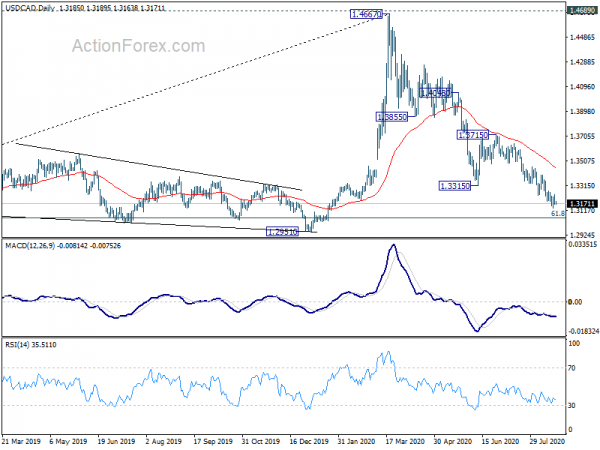