Dollar rises against European majors an Yen as headline non-farm payrolls number came in not far from expectation. Encouragingly, unemployment rate dropped notably while participation rate also rose. Wage growth also some what picked up. DOW future also point to a mildly higher open. The greenback is set to end as the strongest one for the week, followed by Canadian Dollar and then Euro. Australian Dollar would be the weakest, followed by Yen.

Technically, Dollar is still held below near term resistance against other major currencies. The key levels remain on 1.1762 support in EUR/USD. Gold’s break of near term trend line support is a positive sign for the Dollar. Further decline is now in favor to 1902.73 support. Break will raise the chance that the consolidation pattern from 2075.18 would extend through 1862.55. 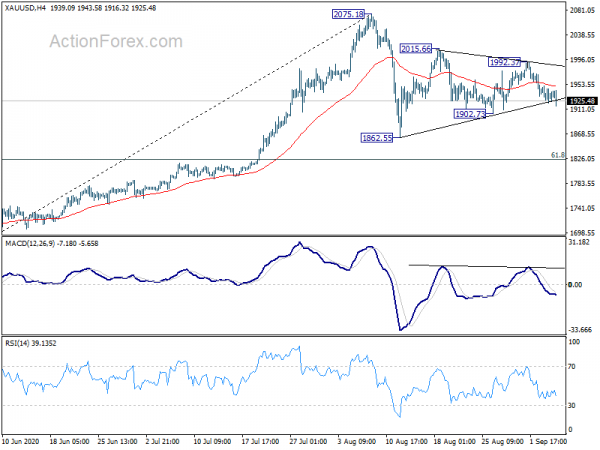 BLS said: “These improvements in the labor market reflect the continued resumption of economic activity that had been curtailed due to the coronavirus (COVID-19) pandemic and efforts to contain it. In August, an increase in government employment largely reflected temporary hiring for the 2020 Census. Notable job gains also occurred in retail trade, in professional and business services, in leisure and hospitality, and in education and health services.”

Canada employment rose 246k in August, below expectation of 400k. Most of the growth were found in full-time jobs, which increase 206k. However, full time employment still just stood at 93.9% of pre-pandemic levels, compared with 96.1% for part-time work. Unemployment rate dropped slightly to 10.2%, down from 10.9%, better than expectation of 11.0%.

BoE Saunders: Quite likely additional easing will be appropriate

BoE MPC member Michael Saunders said it’s “quite likely that additional monetary easing will be appropriate in order to achieve a sustained return of inflation to the 2% target”. “My hunch is that risks lie on the side of weaker growth and a longer period of excess supply than forecast,” he added.

From Germany, factory orders rose 2.8% mom in July, well below expectation of 5.1% mom.

Australia retail sales rose 3.2% mom in July, slightly below expectation of 3.3% mom. All state and territories reported growth in sales, except Victoria which was down -2.1% mom due to stage four lockdown.

“Turnover in clothing, footwear and personal accessory retailing (7.1 per cent) and cafes, restaurants, and takeaway food services (4.9 per cent) rose across the country, with the exception of Victoria, where the reintroduction of Stage 3 stay-at-home restrictions in July partially offset these rises. As was the case in April, restrictions led to significant falls in these industries in Victoria” said Director of Quarterly Economy Wide Surveys Ben James. 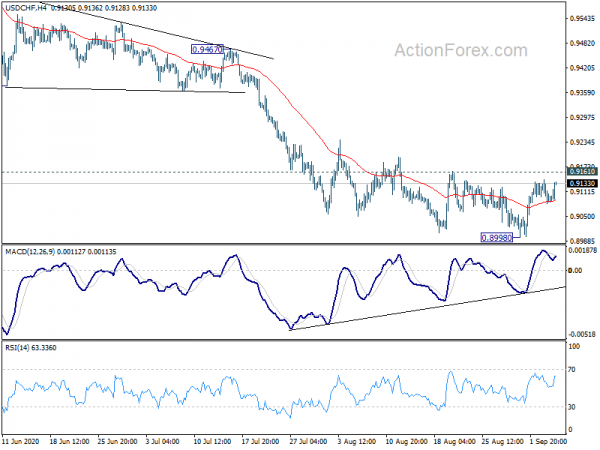 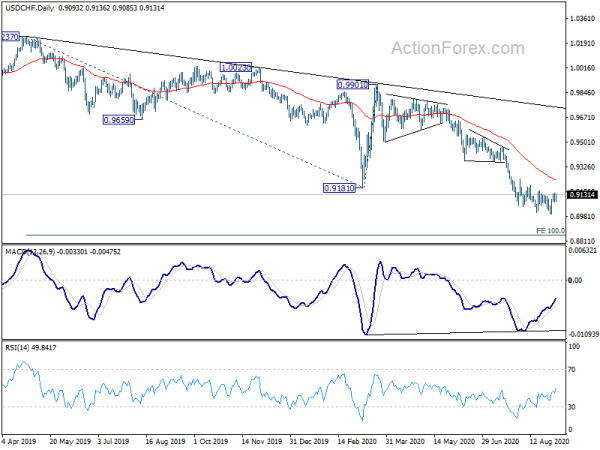