Euro Vulnerable Against Dollar and Yen as Risk Aversion Intensifies

Yen remains generally firm as Asian session as deep risk aversion carries forward from US markets. Concerns over coronavirus vaccine development was a major factor weighing on sentiments. Dollar turns softer, digesting yesterday’s gains, but remains generally firm. Sterling continues to trade as the weakest one and selloff is continuing on no-deal Brexit worries. A focus now will turn to Euro, which looks rather vulnerable against Dollar and Yen. Traders might not want to wait till ECB meeting later in the week to trigger a selloff.

Technically, the case of a Dollar reversal is building up. USD/CAD, following GBP/USD and USD/CHF, breaks 1.3239 resistance which indicates short term bottoming. That’s helped by the free fall in oil price too. Now, the focus is on EUR/USD, which is pressing 1.1762 support. Firm break there should also confirm short term topping and the start of a correction downwards. At the same time, EUR/JPY is also pressing 124.44 support. Break would likely bring deeper fall to correct whole rise from 114.42. 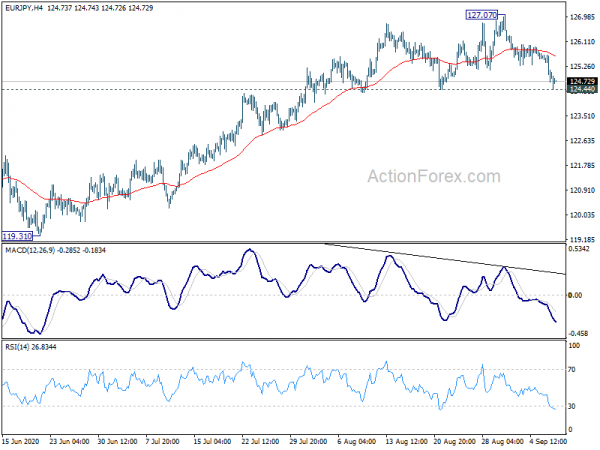 Now, there’s finally a strong reason that could explain the deep selloff in the stock market that started late last week. AstraZeneca Plc said it has paused a late-stage trial of one of the coronavirus vaccine candidate, due to an “unexplained illness in one of the trials. The company said that’s “routine action” while the illness is investigated, “ensuring we maintain the integrity of the trials”. Also, “in large trials, illnesses will happen by chance but must be independently reviewed to check this carefully.” 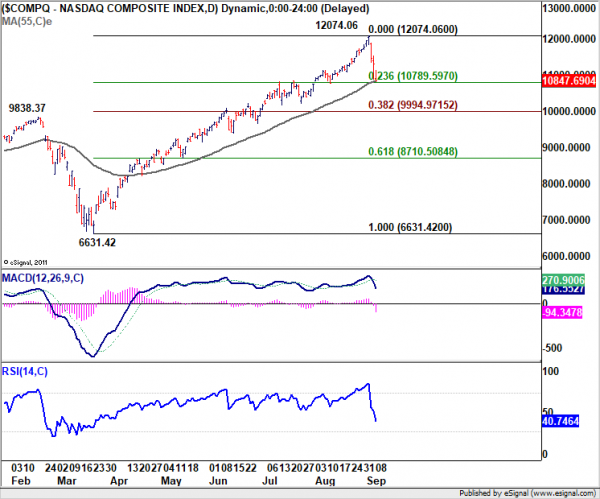 Australia Westpac Consumer Sentiment surged 18% to 94.8 in September, up from 79.5. The index is now just -1.6% below the average over the six months prior to the emergence of COVID-19 in March. “Consumer confidence is returning to more normal levels, although the sensitivity to progress in managing the virus and the opening up of economies remains key to the outlook”

RBA will next meet on October 6, the same say as the government’s Federal Budget announcement. Westpac said “it is reasonable to expect further initiatives from the Reserve Bank to loosen monetary policy”. That approach will be “entirely appropriate” to complement the stimulatory budget.

Preliminary reading of ANZ Business Outlook survey showed marked improvement in business confidence , from -26.0 to -41.8. Own activity outlook also jumped form -17.5 to -9.9. ANZ said “firms are largely looking through the re-emergence of COVID-19 in the community”. Many activity indicators are also “at their highest levels since February”, even though still well down compared to pre-COVID days”.

ANZ added: “The New Zealand economy has a long way to go to navigate this crisis. Fiscal and monetary policy are certainly working their magic. But come year end, far fewer firms will be supported by wage subsidies, and the loss of tourists will be more sorely felt. But for now, things appear to be firmly in the “could be worse” basket.”

Also released, manufacturing sales dropped -12.2% in Q2. The main industry movements were: petroleum and coal products; down -33%, metal products, down -22%; transport equipment, machinery, and equipment, down -14%.

Swiss will release unemployment rate in European session. But main focus will be on BoC rate decision, which the central bank is expected to stand pat. 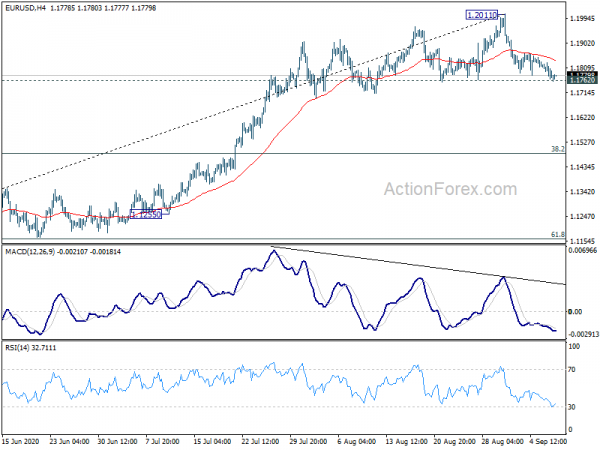