Commodity currencies tumble generally in Asian session today. New Zealand Dollar softens as RBNZ further affirm that it’s in progress for more monetary easing, including negative interest rates. Aussie also tumble on increasing expectation of on imminent RBA rate cut in October. On the other hand, while US stocks closed higher overnight, recovery was not strong enough to warrant completion of the correction. That is, risks in stocks remain on the downside for now. The overall sentiments are supporting Dollar and Yen in general.

Some volatility is seen in NZD/USD after the release but it’s, after all, still extending the fall from 0.6797. Further decline is expected for 0.6488 support. The case of topping at 0.6797 is building up, with bearish divergence condition in daily MACD, and repeated failure to sustain above 0.6755 resistance. Firm break of 0.6488 will confirm that it’s at least correcting the rise from 0.5469 and should target 38.2% retracement at 0.6290. 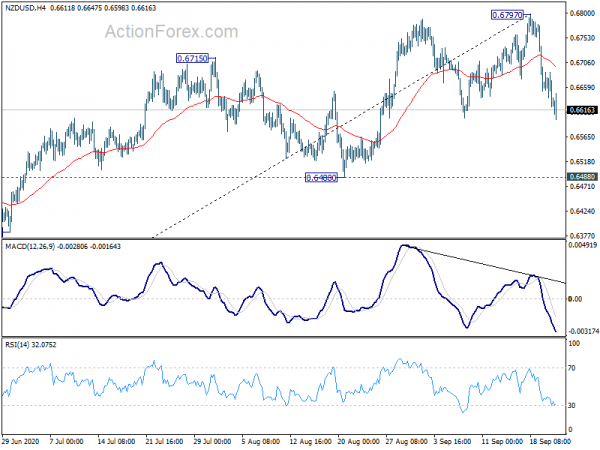 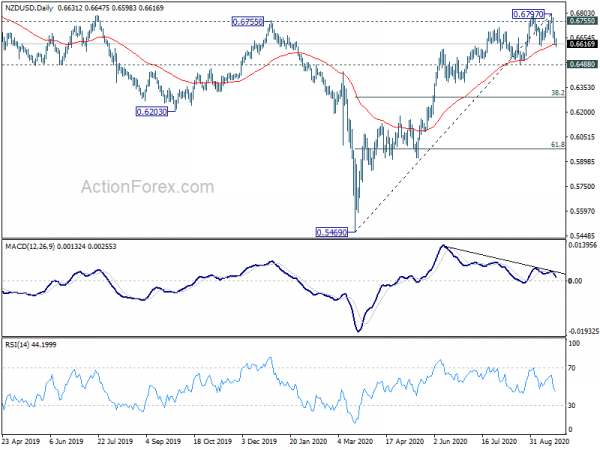 Australian Dollar weakens broadly today, on growing speculation of imminent easing after RBA Deputy Governor Guy Debelle’s speech yesterday. Westpac expects the measures to be announced on October 6, the same day as the government delivers budget, as a “Team Australia” move. RBA is expected to cut overnight cash rate down from 0.25% to 0.10%. Three year yield target will be lowered from 25% to 10% too. Additionally, RBA would expand asset purchases to government and semi government securities in maturities between 5 and 10 years. 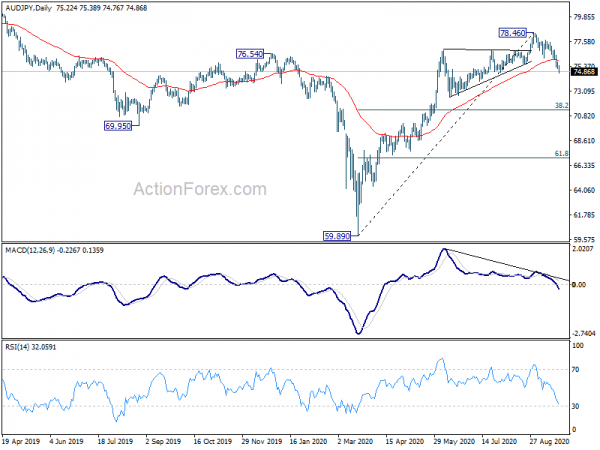 AUD/CAD is also worth a watch as the Aussie has been outperforming other commodity currencies for the past few months. Break of 0.9409 support should confirm that it’s, at least, starting a correction to whole rise form 0.8066 to 0.9696. Deeper decline would be seen back to 38.2% retracement at 0.9073. That, if happens, would mark the near term U-turn in Aussie’s general fortune. 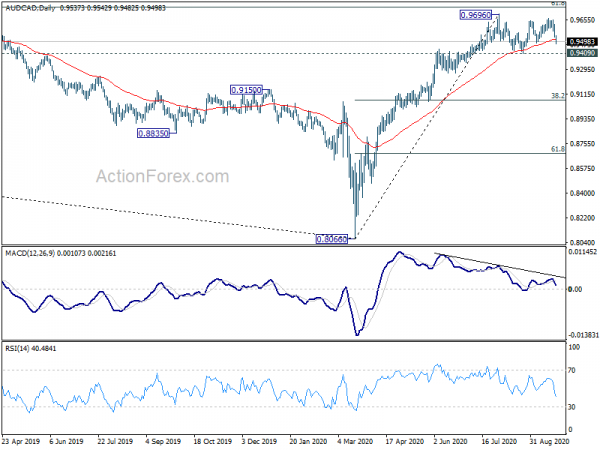 Bernard Aw, Principal Economist at IHS Markit, said: “The latest PMI data showed signs of stabilisation in Australia’s private sector business conditions during September, with activity and sales increasing marginally after falling in August amid tightening containment measures to contain a surge in new infection cases. However, other survey indicators suggest that the rebound may lack legs going forward. The absence of capacity pressure led to a further and sharper decline in workforce numbers, highlighting the prospect of rising unemployment.”

Retail sales dropped -4.2% mom, or AUD -1.28B, in August. Over the year, though, sales was up 6.9% yoy comparing with August 2019. Sales dropped sharply by -12.6 mom in Victoria, due to stage-4 restriction sin Melbourne. Excluding Victoria, sales in the rest of Australia dropped -1.5% mom.

Japan PMI composite edged up to 45.5, setting the scene for more Q3 weakness

Bernard Aw, Principal Economist at IHS Markit, said: “Flash PMI survey data indicated a further decline in Japanese private sector output during September, setting the scene for further economic weakness in the third quarter… That said, the picture of the economy remained much improved when compared to the height of the pandemic during the second quarter.

“The survey also revealed some positive signs. Firstly, employment moved closer to stabilisation, with only a marginal drop in workforce numbers that was the weakest in the current sequence of job shedding. Secondly, business sentiment improved to the strongest since the start of the year, with manufacturing firms particularly optimistic about the year-ahead outlook.”

PMIs from Eurozone and UK will be the major focuses in European session. Germany will also release Gfk consumer sentiment. Later in the day, US will release house price index, as well as PMIs. 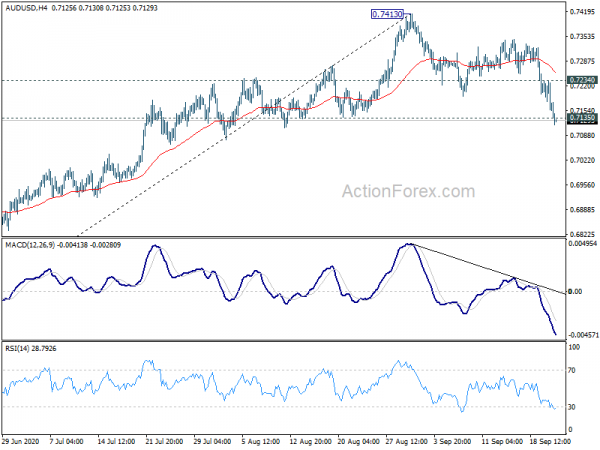 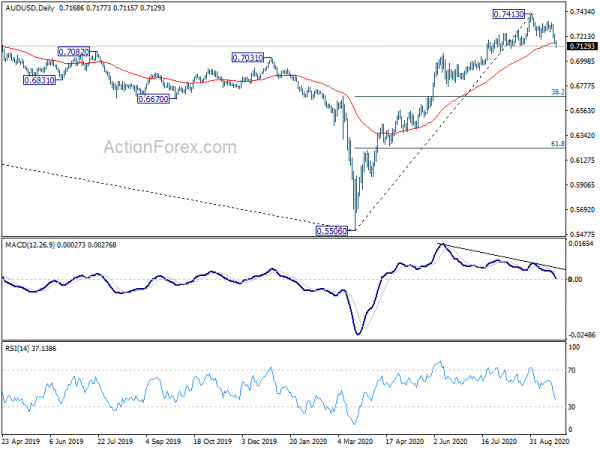