Dollar remains the strongest one for today but Swiss Franc and Sterling have overtaken as the next strongest. Sterling is some what helped by solid PMIs but Euro shrugged off the disappointing PMI readings. European stock markets are having a solid rebound today while US equities might further pare back recent losses. We’ll see if that would help Yen crosses rebound, or drag down the greenback a bit. At the same time, Australian and New Zealand Dollars remain the weakest on expectation of further central bank easing.

Technically, USD/JPY is pressing 105.20 minor resistance. Firm break there will temporarily neutralize near term bearishness and bring stronger rebound back towards 106.94 support. EUR/GBP is a pair to watch for today and tomorrow as. It’s currently in the middle of range of 0.9067/9291 and looks set to take on the lower side. Break of 0.9067 could be an early sign of near term bearish reversal. As long as 1920.06 resistance holds, Gold should extend the decline through 1862.55 to 61.8% retracement of 1670.66 to 2075.18 at 1825.16. Ideally, that should be accompanied by further rebound in Dollar. 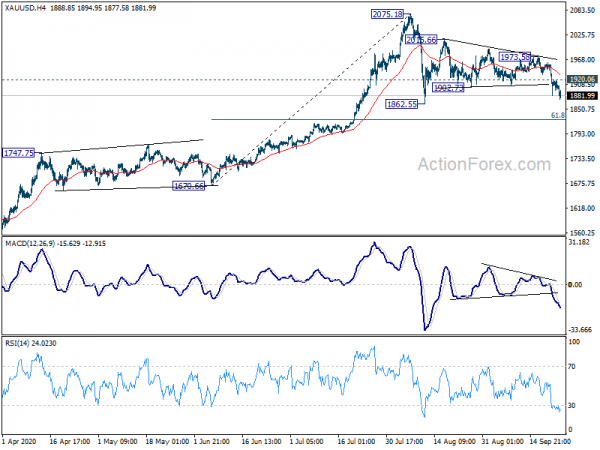 Fed Vice Chair Richard Clarida told Bloomberg that “rates will be at the current level, which is basically zero, until actual observed PCE inflation has reached 2%.”

“That’s ‘at least.’ We could actually keep rates at this level beyond that. But we are not even going to begin thinking about lifting off, we expect, until we actually get observed inflation … equal to 2%. Also we want our labor market indicators to be consistent with maximum employment … So that is the whites of their eyes.”

Chris Williamson, Chief Business Economist at IHS Markit, said: “The UK economy lost some of its bounce in September, as the initial rebound from Covid-19 lockdowns showed signs of fading… It was not surprising to see that the slowdown was especially acute in services… Encouragingly, robust growth in manufacturing, business services and financial services has offset weakness in consumer-facing sectors, meaning the overall rate of expansion remained comfortably above the survey’s long-run average, which adds to expectations that the third quarter will see a solid rebound in GDP from the collapse seen in the second quarter.

Chris Williamson, Chief Business Economist at IHS Markit said: “The eurozone’s economic recovery stalled in September, as rising COVID-19 infections led to a renewed downturn of service sector activity across the region. A two-speed economy is evident… The main concern at present is therefore whether the weakness of the September data will intensify into the fourth quarter, and result in a slide back into recession after a frustratingly brief rebound in the third quarter.”

Germany Gfk Consumer Confidence for October rose slightly to -1.6, up from -1.7. Economic expectations jumped sharply from 11.7 to 24.1 in September. Income expectations also improved from 12.8 to 16.1.

Japan PMI composite edged up to 45.5, setting the scene for more Q3 weakness

Bernard Aw, Principal Economist at IHS Markit, said: “Flash PMI survey data indicated a further decline in Japanese private sector output during September, setting the scene for further economic weakness in the third quarter… That said, the picture of the economy remained much improved when compared to the height of the pandemic during the second quarter.

“The survey also revealed some positive signs. Firstly, employment moved closer to stabilisation, with only a marginal drop in workforce numbers that was the weakest in the current sequence of job shedding. Secondly, business sentiment improved to the strongest since the start of the year, with manufacturing firms particularly optimistic about the year-ahead outlook.”

Bernard Aw, Principal Economist at IHS Markit, said: “The latest PMI data showed signs of stabilisation in Australia’s private sector business conditions during September, with activity and sales increasing marginally after falling in August amid tightening containment measures to contain a surge in new infection cases. However, other survey indicators suggest that the rebound may lack legs going forward. The absence of capacity pressure led to a further and sharper decline in workforce numbers, highlighting the prospect of rising unemployment.”

Retail sales dropped -4.2% mom, or AUD -1.28B, in August. Over the year, though, sales was up 6.9% yoy comparing with August 2019. Sales dropped sharply by -12.6 mom in Victoria, due to stage-4 restriction sin Melbourne. Excluding Victoria, sales in the rest of Australia dropped -1.5% mom.

RBNZ holds OCR at 0.25% and prepares for more stimulus

USD/JPY’s rebound from 104.00 continues today and focus is back on 105.20 support turned resistance. Decisive break there would indicate short term bottoming. Stronger rebound would be seen back to 106.94 resistance. Nevertheless, rejection by 105.20 will maintain near term bearishness for a break through 104.00 at a later stage. 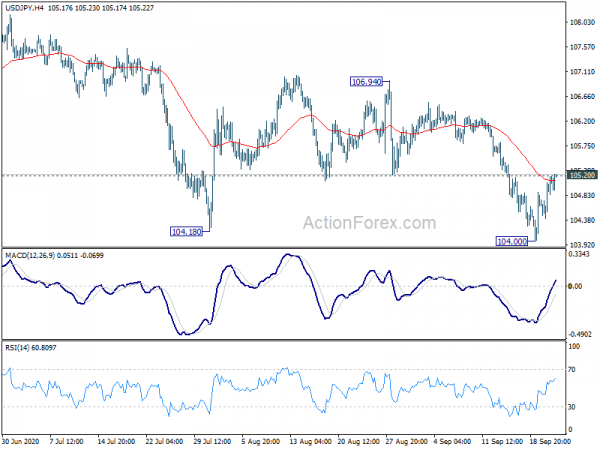 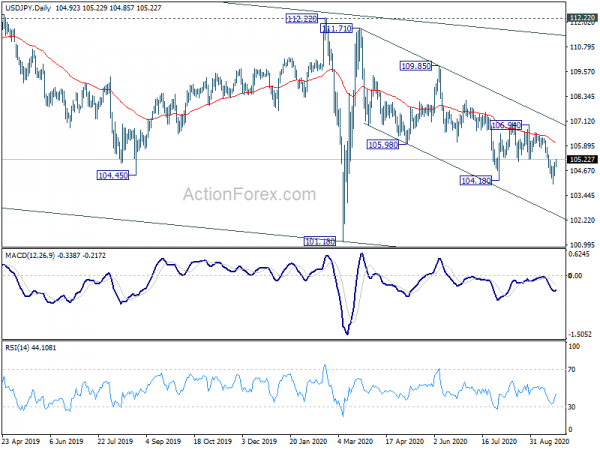