Dollar remains the strongest one for the week, followed by Yen, as risk aversion continue to dominate. The recovery attempts in European stocks appeared to have faded very quickly while DOW futures point another day of lower open. Sterling is relatively resilient, with some support from the new jobs support scheme announced by UK Finance Minister Rishi Sunak. But there is no sign of a clear rebound versus Dollar and Yen. Swiss Franc is mixed as markets shrug off SNB rate decision. On the other hand, Australian Dollar continues to lead other commodity currencies lower.

Technically, we’ll continue to watch 1.6586 resistance in EUR/AUD and 0.9409 support in AUD/CAD. Decisive break of these level indicate there selling pressure on the Aussie is there to stay for longer. On the other hand, 0.9067 support in EUR/GBP is level to pay attention to too. Firm break there will be an early sign of near term bearish reversal and would target 0.8866 support next. GBP/AUD, on the other hand, would be eyeing 1.8411 resistance and break could confirm completion of whole decline from 2.0854. These pairs would be very interactive in the coming days. 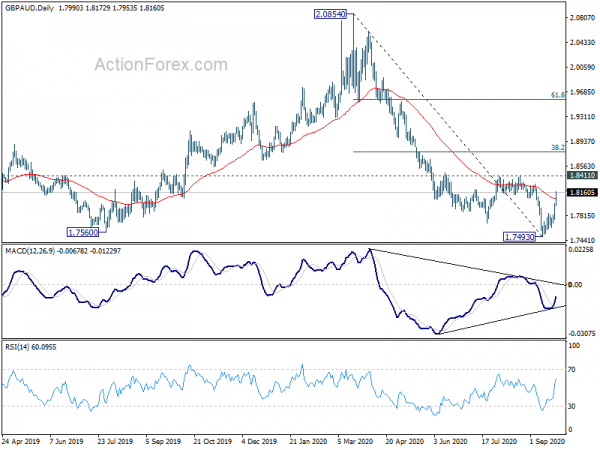 US initial jobless claims rose 4k to 870k, above expectation

SNB left sight deposit rate unchanged at -0.75% as widely expected. “In view of the fact that the Swiss franc is still highly valued, the SNB remains willing to intervene more strongly in the foreign exchange market, while taking the overall exchange rate situation into consideration.”.

On inflation outlook, which is subject to “unusually high uncertainty”, SNB expects inflation to stay negative this year at -0.6%. Inflation is then likely to “edge back to positive” in 2021 at 0.1%, and “increase slightly further” in 2022 at 0.2%.

SNB also noted that GDP is set to shrink by around -5% this year. But domestic economic activity has “picked up significantly since May”. That should be reflected in a “strong rise in GDP” in Q3. The positive development is “likely to continue in 2021. However, recovery will only be “partial for the time being”.

Minutes of BoJ’s July 14/15 meeting showed policymakers are concerned with resurgence of coronavirus in Japan. A few board members noted, “infection numbers are increasing at a faster pace globally, so we need to be on alert of the possibility of a re-insurgence including in Japan”. Another member warned, “if infection numbers rise again, the timing of an economic recovery will be delayed.”

Overall, members agreed “the economy, with economic activity resuming, was likely to improve gradually from the second half of this year; however, the pace of improvement was expected to be only moderate while the impact of COVID-19 remained worldwide.”

New Zealand exports rose 8.6% yoy in NZD 4.4B in August. Imports, on the other hand, dropped sharply by -16% yoy to NZD 4.8B. The monthly trade balance was a deficit of NZD -353M, slightly larger than expectations.

Imports were down from all top trading partners, including China, EU, Australia, USA and Japan. But there were contrasting movements in exports, up to China, USA and EU, but down to Australia and Japan. 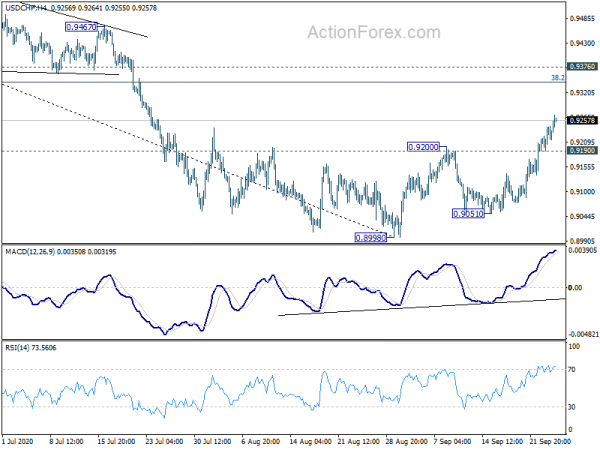 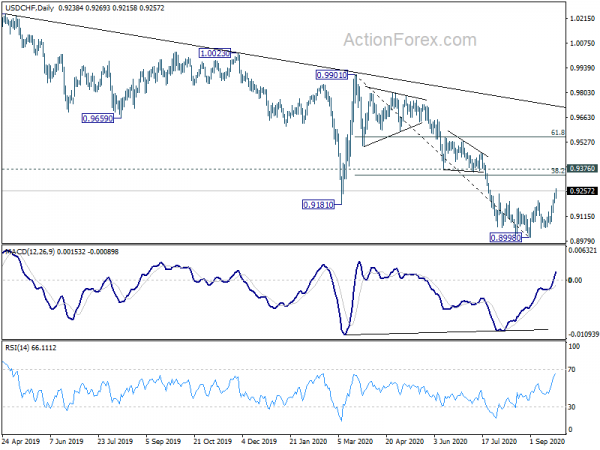