Dollar and Yen recover some ground in Asian session but it’s unsure if this week’s pull back is completed yet. There were little reactions to the President debate of Donald Trump and Joe Biden. Asian markets are mixed despite some solid data out of China. DOW future is currently down around -200 pts but it’s still long a way to open. Focus will, for now, turn back to economic data, starting with ADP employment today, ISM manufacturing tomorrow, and then the big event of non-farm payrolls on Friday.

Technically, EUR/USD breached 1.1752 resistance while USD/CHF breached 0.9200 support. But there was no follow through selling in Dollar yet. Meanwhile, EUR/JPY retreats just ahead of 124.31 resistance, same for GBP/JPY on 136.46 resistance. There is no confirmation that this week’s pullbacks in Dollar and Yen are turning into near term reversal. These levels will be the focuses for the rest of the week.

China’s NBS PMI Manufacturing rose slightly to 51.5 in September, up from 51.0, above expectation of 51.2. NBS PMI Non-Manufacturing rose to 55.9, up from 55.2, above expectation of 54.6. “Although overall manufacturing demand has improved, the industry has recovered unevenly,” said Zhao Qinghe, an NBS official. “In addition, the global epidemic has not yet been fully and effectively controlled, and there are still uncertain factors in China’s imports and exports.”

Wang Zhe, Senior Economist at Caixin Insight Group said: “The sharp rise in overseas demand has complemented the domestic market… The strength of the manufacturing sector will take some of the pressure off policymakers going forward. However, the job market remains worrisome, as the improvement in employment relies on a longer-term economic recovery and a more stable external environment.”

On the other hand, retail sales dropped -1.9% yoy in August, better than expectation of -3.5% yoy. But that’s still the sixth consecutive month of decline, highlighting the weak recovery in consumer demand.

New Zealand ANZ Business Confidence rose to -28.5 in September, up from August’s -41.8, but revised down from preliminary reading of -26.0. All sectors stayed negative with Agriculture at -72.2 and services at -31.7. Own Activity Outlook improved to -5.4, up from August’s -17.5, revised up from preliminary reading of -9.9. Agriculture activity was positive at 13.6 and contraction at 10.8. Services activity was worse at -12.1.

ANZ said business “appear relatively optimism”. But “as a reality check, though, the levels of most activity indicators remain very subdued relative to pre-COVID days, and are still at levels regrettably reminiscent of 2009.”

Fed Williams: It’s a matter of fiscal policy that tilts the economic trajectory

New York Fed President John Williams said the economy is on a “pretty good trajectory”. And, “it’s really a matter of if there’s more or less fiscal policy that maybe tilts that trajectory”. He expects the economy to be back close to full employment in “about three years time”, but “there’s clearly a lot of unknowns”.

On Fed’s average inflation targeting, “we’re purposely overshooting that moderately for some time to get that balance,” he said. “To me, success is not some arithmetic or some formula but it’s really this notion of inflation expectations, how people think about what’s inflation going to be in the future.”

Dallas Fed President Robert Kaplan said in an essay that 2020 GDP is expected to show a contraction of approximately -3.0%. The economy would then growth by roughly 3.5% in 2021. But he emphasized the need of “additional” fiscal measures. “Lack of additional fiscal relief would create a key downside risk to my economic forecast for 2020 and 2021.”

BoE Bailey: No judgement on whether to use negative interest rates yet

BoE Governor Andrew Bailey said in a speech to Queen’s University Belfast that the economy has performed a bit stronger than expected. However, there are signs that recovery might not be as strong going forward. In Q3, economic activity was around -7% to -10% lower than pre-pandemic levels. Risks include COVID, Brexit talks, US-China relationship.

On monetary policy he emphasized it’s “critically important that the BoE’s can use all its tools to support the economy.” The central bank is “not out of ammunition on QE”, and it can also use “forward guidance”. 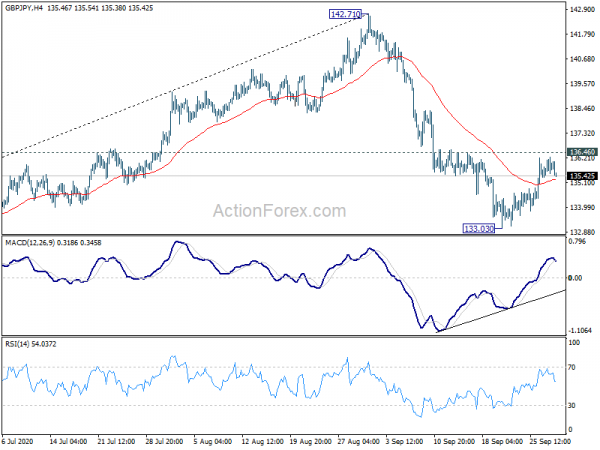 In the bigger picture, rise from 123.94 is seen only as a rising leg of the sideway consolidation pattern from 122.75 (2016 low). As long as 147.95 resistance holds, an eventual downside breakout remains in favor. However, firm break of 147.95 will raise the chance of long term bullish reversal. Focus will then be turned to 156.59 resistance for confirmation. 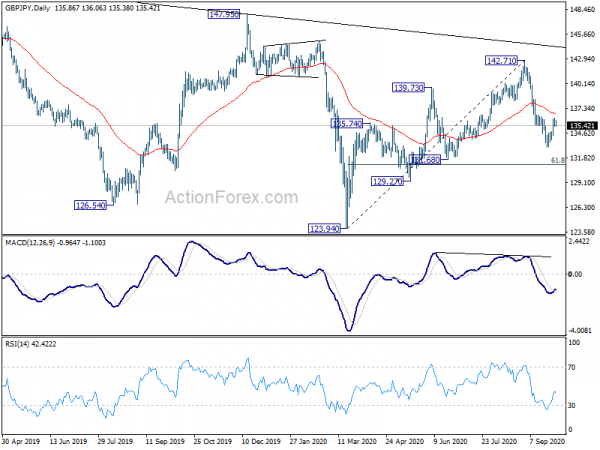