Markets suddenly turned into a risk-off mode on the first October surprise. US President Donald Trump and wife Melania had tested positive for coronavirus. Both were going to quarantine with Trump’s scheduled cleared of all travels. Yen surges broadly as reaction. While Dollar follows higher, it’s quickly losing momentum and was overwhelmed by Yen. Commodity currencies are generally pressured with Aussie leading the way down. While focus will also be on US non-farm payroll report, Trump’s health condition would be much more market moving.

Technically, an immediate focus is on 104.92 minor support in UISD/JPY. Firm break there will indicate completion of rebound from 104.00 support and bring retest of this level. We’ll have to see the fall in USD/JPY would mainly drag down Yen crosses, or spread to other Dollar pairs. EUR/USD’s 1.1752 resistance will be closely watched to confirm underlying selling in Dollar. Also, Gold would taken on 1920.06 resistance and bring will likely bring further rise to 1973.58 resistance next, which could be reflected in Dollar weakness elsewhere.

Japan unemployment rate rose to 3% in Aug, highest since 2017

The unemployment remained relatively low by global standard. Yet, there are concerns of further slowdown in recovery in the job markets, and unemployment rate could rise further. While worsening conditions call for more government support, Finance Minister Taro Aso insisted that he’s not considering a third extra budget at present, as funds in the second package wasn’t used up yet.

Suren Thiru, Head of Economics at the British Chambers of Commerce (BCC), said: “Our latest survey indicates that underlying economic conditions remained exceptionally weak in the third quarter. While the declines in indicators of activity slowed as the UK economy gradually reopened, they remain well short of pre-pandemic levels with little sign of a swift ‘V’-shaped recovery.”

Eurozone will release CPI flash in European session. But main focus will be on non-farm payrolls form the US. Michigan consumer sentiment and factory orders will also be released.

Focus is back on 104.92 minor support with today’s sharp decline. Firm break there will indicate that rebound from 104.00 has completed. Intraday bias will be turned back to the downside for 104.00. Break there will resume larger down trend from 111.71. On the upside, though, break of 105.80 resistance will resume rebound form 104.00 to 106.94 resistance, to confirm completion of the near term down trend. 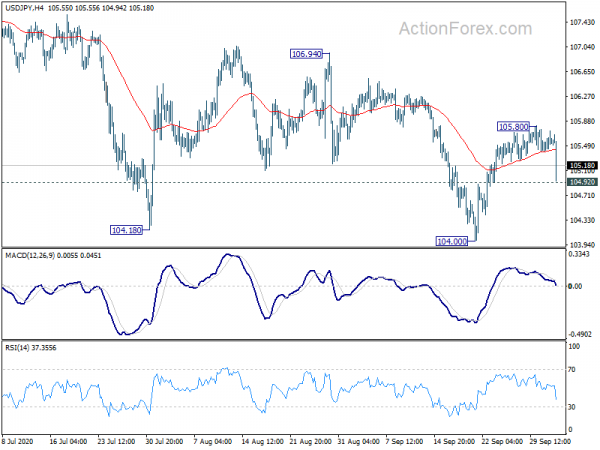 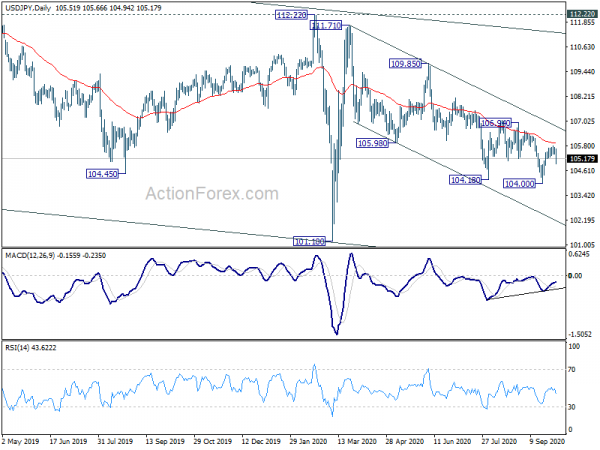