Safe Haven Flows Back to Dollar, Yen and Bonds

Risk aversion is currently in driving seat in the markets today. In the US, hope of fresh fiscal stimulus fades for now, most likely not until after elections. In Europe, countries are going back into lockdowns as coronavirus cases hit records. Negative sentiment drive global stock indices lower and pushed bonds higher. In particular, Germany 10-year yield is back below -0.6 handle while US 10-year yield is struggling around 0.7 and these are signs of nervousness in the markets. In the currency markets Dollar is currently the strongest one, followed by Yen. Australian is the worst performing, followed by New Zealand Dollar.

Technically, breakouts are starting to happen with EUR/CHF through 1.0721 support, which should bring deeper fall back to 1.0602 in the near term. AUD/USD’s break of 0.7095 support also suggests that fall from 0.7413 is resuming through 0.7005 low. GBP/USD is holding above 1.2845 support, GBP/JPY above 135.66 support too. USD/CHF is also held well below 0.9197 resistance. We’d like to see these levels taken out firmly to confirm full return of risk-off markets. Meanwhile, a big one to watch is 1.6586 resistance in EUR/AUD, and a break there would be a strong indication of underlying near term bearishness in Aussie. 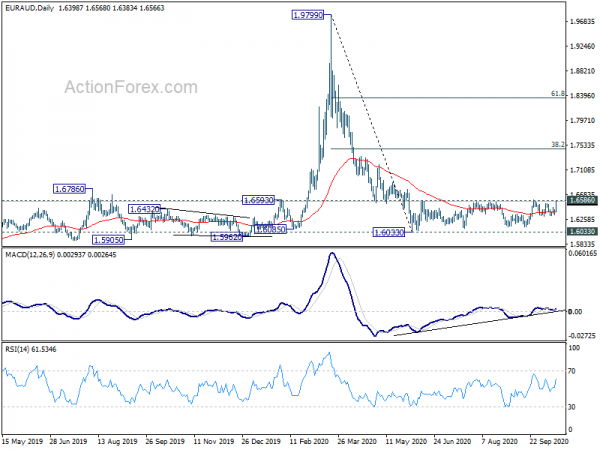 US initial jobless claims rose 53k to 898k in the week ending October 10, above expectation of 810k. Four-week-moving average of initial close rose 8k to 866k.

Philly Fed Manufacturing index, on the other hand, rose sharply to 32.3, up form 15.0, well above expectation of 15.5. it’s the fifth consecutive positive reading after reaching long-term lows in April and May.

UK: A negotiated Brexit outcome is still our preference

According to his spokesman, UK Prime Minister Boris Johnson was updated by chief Brexit negotiator David Frost that negotiations were still stuck over fisheries and level playing field competition guarantees. But the spokesman reiterated, “we look forward to hearing the outcome of the European Council and would reflect on that before setting out the UK’s next steps. We’ve always been clear that a negotiated outcome is our preference.”

On the other, according to a draft of the EU summit conclusion, “the European Council invites the Union’s chief negotiator to continue negotiations in the coming weeks, and calls on the UK to make the necessary moves to make an agreement possible”.

RBA Governor Philip Lowe hinted in a speech that the central bank is ready for deliver more monetary easing in the upcoming meeting in November. He noted that “as the economy opens up, though, it is reasonable to expect that further monetary easing would get more traction than was the case earlier.”

Lowe also noted that that financial stability considerations “have changed somewhat”. To the extent that an easing of monetary policy helps people get jobs it will help private sector balance sheets and lessen the number of problem loans. In so doing, it can reduce financial stability risks.”

Also, while RBA’s balance sheet has “increased considerably” since March, “large increases have occurred in other countries. RBA is “considering the implications os this as we work through out own options”.

Lowe’s comments are in line with market expectations of another cut in cash rate to 0.10%, with expansion of asset purchases to longer maturities. 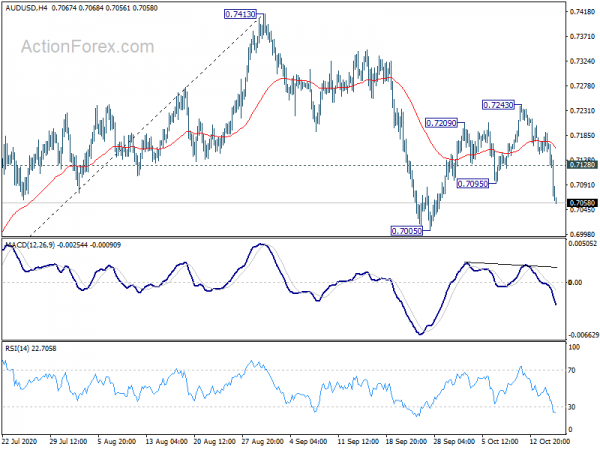 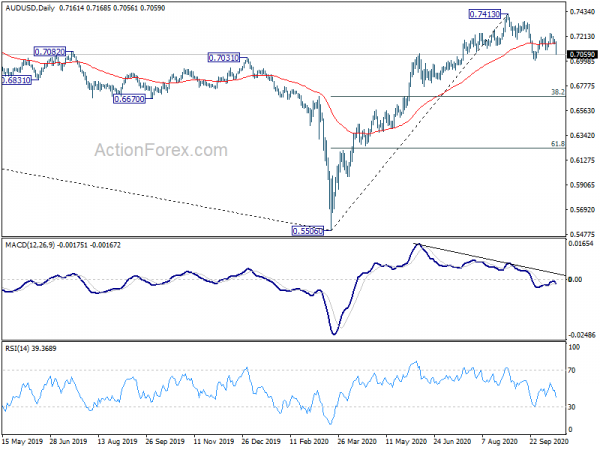