Dollar recovers mildly in Asian session today but remains generally weak, as the worst performing one for the week so far. Sellers appear to be taking a breather for now, and wait for fresh development regarding fiscal stimulus, as well as the final Presidential debate before election. For now, European majors are the best performing ones for the week, led by Sterling, and then Euro. Commodity currencies are not benefiting much from the Dollar’s selloff.

Technically, while Dollar was sold off everywhere, it’s actually still held above the lows made back in August. Gold also appears to fail to break through 1933.17 resistance again. Dollar sellers seem to be not too committed yet. Focus could turn to the interplay between European majors today. In particular, EUR/GBP is now eyeing 0.9007 temporary low after prior rejection by 0.9162 resistance. Break there would extend the correction from 0.9291. GBP/CHF also rebounded strongly after just breaching 1.1723 minor support, and it’s heading back to 1.1968 resistance. Break of these two levels could solidify the Pound’s comeback. 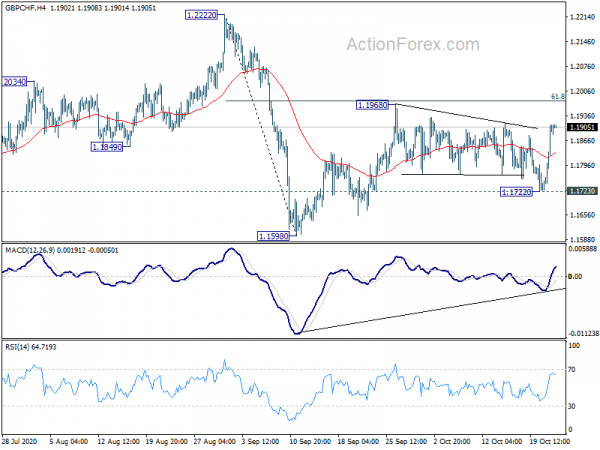 After a 48-minute phone call, US Treasury Steven Mnuchin and House Speaker Nancy Pelosi appeared to move closer to an agreement on fresh fiscal stimulus. Yet, time is running out for passing any deal before election. Pelosi spokesman Drew Hammill said the negotiators moved “closer to being able to put pen to paper to write legislation” and left “better prepared to reach compromise on several priorities.” “Differences continue to be narrowed on health priorities, including language providing a national strategic testing and contract tracing plan” Hammill added. “But more work needs to be done to ensure that schools are the safest places in America for children to learn”.

10-year yield, on the other hand, staged a strong rally and closed up 0.019 at 0.816. Solid support was give by 55 day EMA again, which solidify near term bullishness. We’d likely see the rise from 0.504 extends further towards 0.957 structural resistance. Though, no decisive break is expected there any time soon, not at until the pandemic risks are all cleared, or something drastic happens.

St. Louis Fed President James Bullard said Fed’s policy is “so far so good”. Negative rates are not a good option for the US and he even questioned they aren’t effect where they have been adopted. Fed would instead need to think about the way to play with QE going forward.

Bullard is also comfortable with the current amount of fiscal stimulus, as “in terms of the aggregate resources it seems like we should have enough” to bolster growth until Q1. He’s not expecting a surge in fatality rate of coronavirus, which the US has brought down to accidental injury level. He expected business can cope with the situation and operate safely yet succeed economically.

Fed’s Beige Book noted that “economic activity continued to increase across all districts, with the pace of growth characterized as slight to modest in most districts.” However, “changes in activity varied greatly by sector.” Employment increased in “almost all Districts” but growth “remained slow”.

She also noted there is still a “high degree of uncertainty around the economic outlook”. It is ” possible that bank resilience will be tested in the coming months as loan losses rise materially from current low levels”. She also urged financial institutions to play a role here and they should be “reassessing how they are supporting the recovery and best serving their customers”.

Germany Gfk consumer sentiment and UK CBI industrial order expectations will be released in European session. later in the day, US will release jobless claims and existing home sales.

Focus is back on 0.9007 support in EUR/GBP with yesterday’s sharp fall. Break will resume the decline from 0.9291 and turn intraday bias to the downside. Nevertheless, as such fall is still seen as a corrective move, downside should be contained above 0.8866 support to bring rebound. On the upside, break of 0.9148 resistance will now suggest completion of the correction and bring retest of 0.9291 resistance.