Asian Markets rebound notably today, following the strong close in US overnight. Canadian Dollar staged a U-turn, following the path of oil price. Australian Dollar is trading generally lower today following RBA’s easing announcement. Yet, downside is relatively limited, expect versus a few. Dollar has turned mixed, together with Yen and European majors. Except that, Swiss Franc seems to has exhausted recent bullish momentum against Euro and weakened in general. Overall, the markets are actually mixed, with focus staying on result of US election.

Technically, USD/CAD’s break of 1.3225 support argues that rebound from 1.3081 has completed. Near term outlook is kept neutral for more range trading. CAD/JPY also rebound after hitting 77.91, ahead of 77.61 support. The development suggest that sideway trading from 81.91 is extending with another rising leg. EUR/CAD’s break of 1.5389 support suggests that corrective fall from 1.5978 is extending with another down leg. Risk will stay on the downside as long as 1.5669 resistance holds. 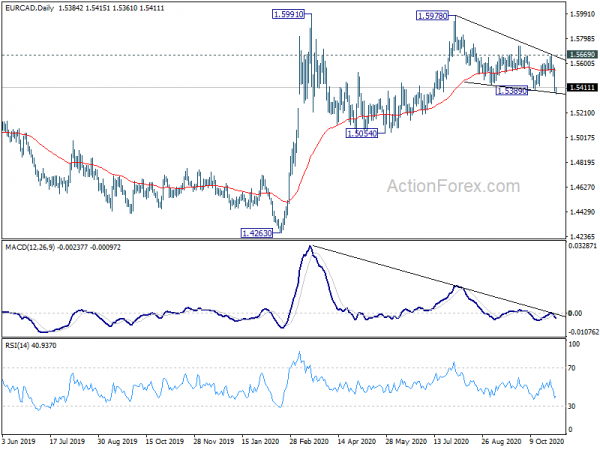 The central bank acknowledged that recent data have been “a bit better than expected” and “near-term outlook is better than it was three months ago”. But “recovery is still expected to be bumpy and drawn out and the outlook remains dependent on successful containment of the virus.”

Q3 GDP is expected to report positive growth. But it will “take some time to reach the pre-pandemic level of output”. GDP is projected to grow around 6% over the year to June 2021, and 4% in 2022. Unemployment rate is projected to peak at a little below 8 per cent, rather than the 10 per cent expected previously. Unemployment rate is expected to drop be to around 6% at the end of 2022.

Australian Dollar is trading generally lower after RBA easing announcement, including against other commodity currencies. AUD/CAD’s decline is one of the more apparent. Rebound from 0.9247 might be slightly stronger than expected. Yet, the cross is held comfortably below falling 55 day EMA, keeping near term outlook bearish. The corrective fall from 0.9696 should resume sooner or later as long as 0.9433 resistance holds. Break of 0.9247 will target 38.2% retracement of 0.8066 to 0.9696 at 0.9073. 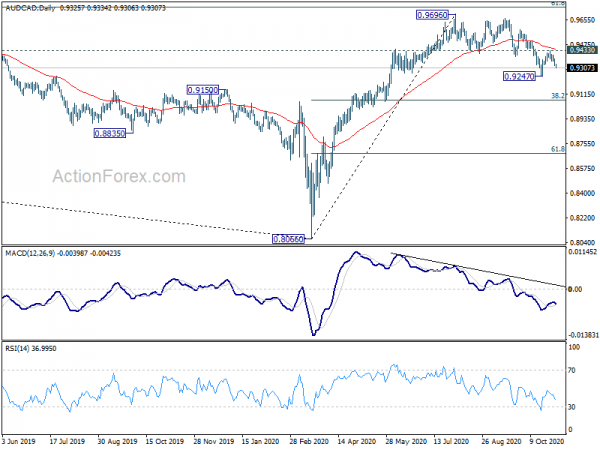 AUD/NZD is holding in very tight range so far today. Downside momentum is somewhat diminishing, yet there is no sign of bottoming yet. As long as 1.0717 support turned resistance holds, further decline remains in favor. 1.0565 structural support is the key trend defining level. Strong rebound from there will keep the rally form 0.9994 intact, and retain the prospect of another rise through 1.1043 at a later stage. But Sustained break of 1.0565 will argue that such rise has completed. Deeper fall would be seen to 61.8% retracement of 0.9994 to 1.1043 at 1.0395 and below. 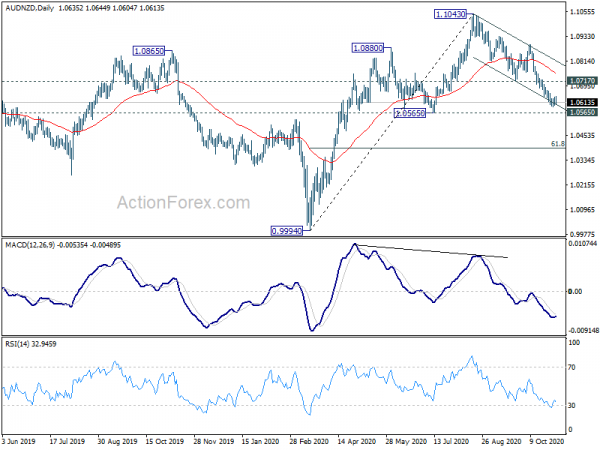 After initial dive to 33.50 yesterday, WTI oil price staged a strong rebound and it’s now back above 36 handle. The rebound was driven by news that Russia discussed a three-month extension of OPEC+ oil production cuts, until March 2021. 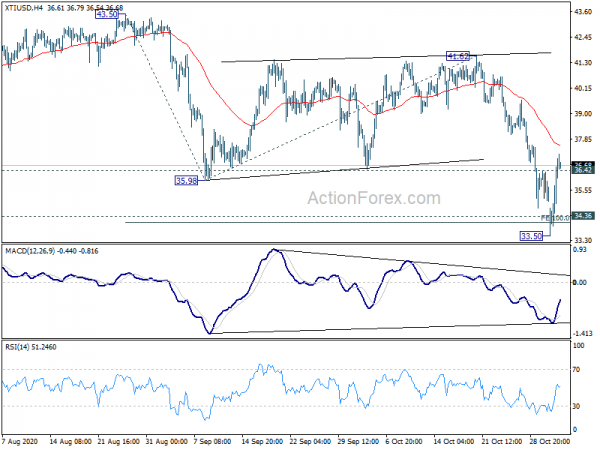 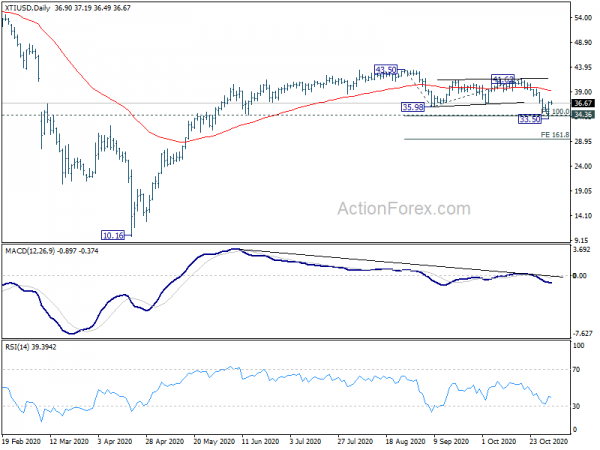 Regarding the development of Gold, this question has been in our minds for some time. Is gold just correcting the rise from 1451.16 to 2075.18? Or it’s correcting the whole up trend from 1160.17? We’d probably find out very soon as the results of US election unfolds, which should set the direction of the financial markets for the next few months.

Nevertheless, even in case of a brief breach, failure to sustain below 1848.39, followed by break of 1933.17 resistance, will argue that the correction is a smaller scale one, and has probably completed. Retest of 2075.18 high should be seen rather soon, with prospect of a break out. We’ll see. 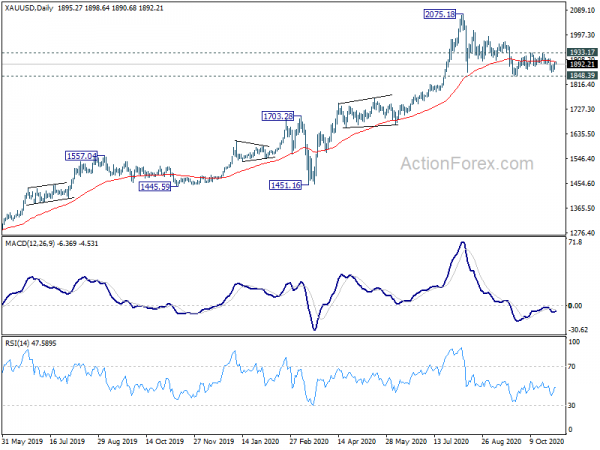 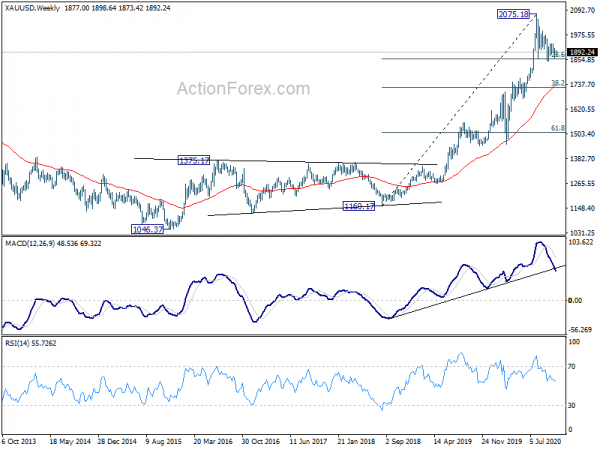 The economic calendar is relatively light today. Swiss CPI and US factory orders are the main features. 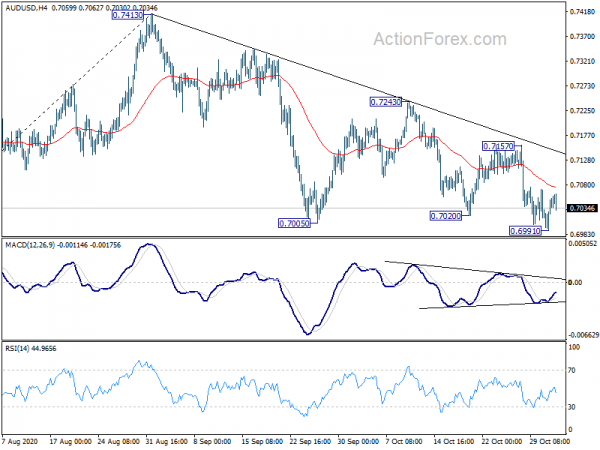 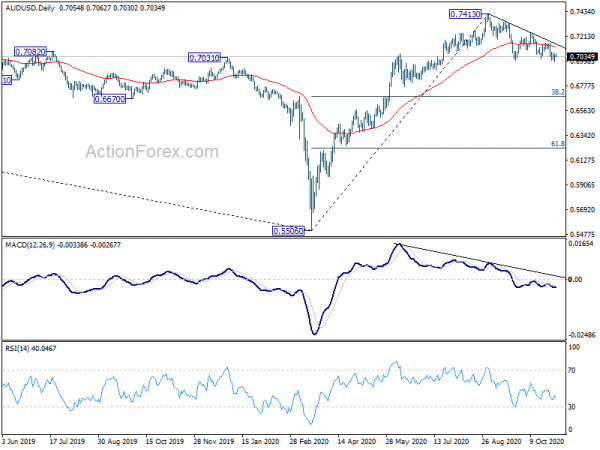