Yen Down on Surging US Yields, Europeans Stay Strong

Yen trades generally lower today as pressured by surging US treasury yields and mild risk-on sentiments. Dollar and commodity currencies are not too far behind. European majors continue to be strong as led by Euro and Swiss Franc. Sterling is not performing too badly against others as traders are not committing to bet on no-deal Brexit.

Technically, the strong rise in US 10-year yield overnight is worth a note. TNX is so far trending well inside near term rising channel, holding above 55 day EMA. A test on 1% handle would likely be seen soon but 1.266 resistance should be out of radar for now, at least until a plan for mass rollout of coronavirus vaccine.

China PMI services rose to 57.8, second highest in a decade

China Caixin PMI Services rose to 57.8 in November, up from 56.7, above expectation of 56.5. It’s also the second quickest expansion rate since April 2010. Employment growth was strongest since October 2010 while input costs rose at sharpest pace for over a decade. PMI Composite rose from 55.7 to 57.5, best reading since March 2010.

Wang Zhe, Senior Economist at Caixin Insight Group said: “We expect the economic recovery in the post-epidemic era to continue for several months. At the same time, deciding how to gradually withdraw the easing policies launched during the epidemic will require careful planning as uncertainties still exist inside and outside China.”

BoJ Suzuki: Desirable for the yield curve for super-long-term JGBs to become steeper

BoJ board member Hitoshi Suzuki said in a speech that the Japanese economy “remained in a severe situation”. Business fixed investment has been on a “declining trend” on deterioration in corporate profits and over uncertainties. Such down trend is “likely to continue for the time being”. Weakness can also be seen in employment.

On monetary policy, Suzuki said it’s “desirable for the yield curve for super-long-term JGBs to become steeper at a moderate pace with the Bank keeping 10-year JGB yields at around 0 percent, in that financial institutions can improve profits on their investment and the Bank can achieve financial system stability while monetary easing is prolonged.”

AiG Performance of Construction Index rose 2.6 pts to 55.3 in November, a second consecutive month of positive conditions, and the strongest monthly result since April 2018.

Intraday bias in EUR/JPY remain son the upside for 127.07 resistance. Decisive break there will resume whole rally from 114.42. Next target will be 128.67 medium term fibonacci level On the upside, break of 125.13 resistance turned support is needed to indicate short term topping. Otherwise, further rise will remain in favor even in case of retreat. 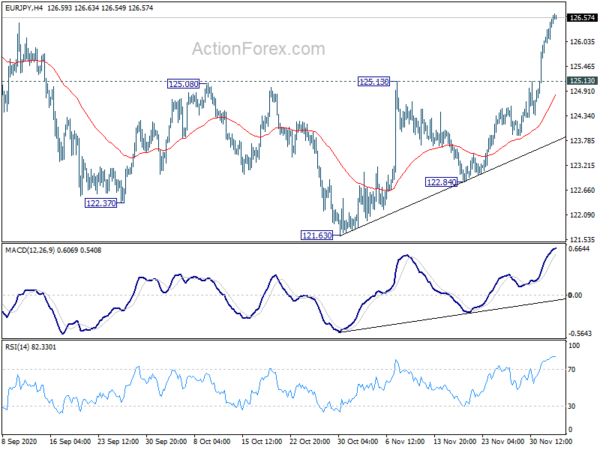 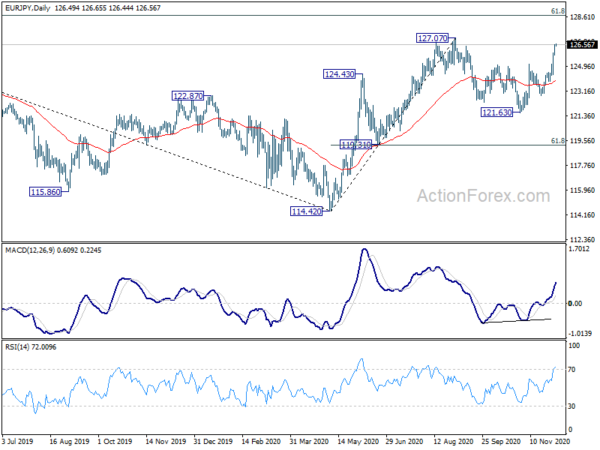