European markets open the week in heavy selloff on worries over a new strain of coronavirus discovered in the UK, which was seen as “out of control” by the Health minister. At the time of writing, DOW future is also down around -500 pts. Dollar is staging a broad based rebound on risk aversion today, followed by Yen and then Swiss Franc. Commodity currencies are trying to overtake Sterling as the weakest ones. Though, the Pound has the “quality” to tumble further as Brexit trade negotiations remain unresolved.

Technically, AUD/USD’s break of 0.7507 support indicates short term topping at 0.7639. USD/CAD’s breach of 1.2928 resistance also suggests short term bottoming at 1.2688. But these developments are not confirmed by equivalent moves in other pairs yet. Eyes will be on particularly on 1.2058 support in EUR/USD and 1.3134 support in GBP/USD. Similarly, EUR/JPY and GBP/JPY are also holding above 125.70 and 136.78 support respectively.

WTI crude oil in deep retreat, short term top in place ahead of 50

WTI crude oil drops sharply today, following broad based risk aversion. Considering bearish divergence condition in 4 hour MACD, and the proximity to 50 psychological level, a short term top could be formed at 49.25. Break of 45.66 support will confirm this case. Deeper correction would be seen to cluster support level at 43.50, 38.2% retracement of 33.50 to 49.25 at 43.23. Nevertheless, strong support from 45.66 could set the stage for another take on 50 before topping. 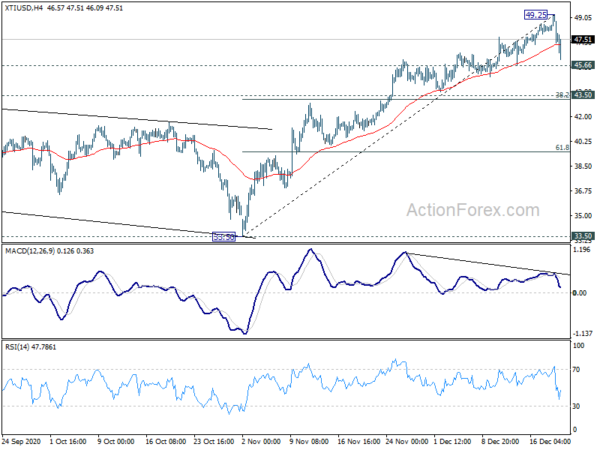 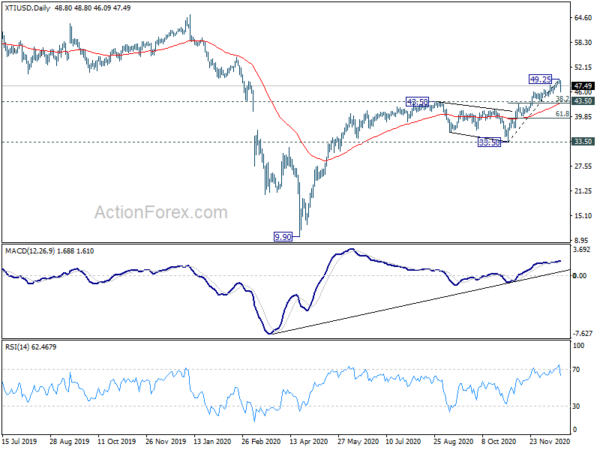 Gold edged higher 1906.74 earlier today quickly turned into a deep retreat, follow global risk aversion. Though, downside is contained well above 1819.05 support so far. Thus, near term outlook stays cautiously bullish. We’re holding on to the view that corrective fall from 2075.18 has completed at 1764.31 already. Above 1906.74 will resume the rebound from 1764.31 to 1965.50 resistance next. Firm break there will further affirm this bullish case and target 2075.18 high.

However, break of 1819.05 will keep gold inside near term falling channel. That would also extend the correction from 2075.18 with another fall through 1764.31, before completion. 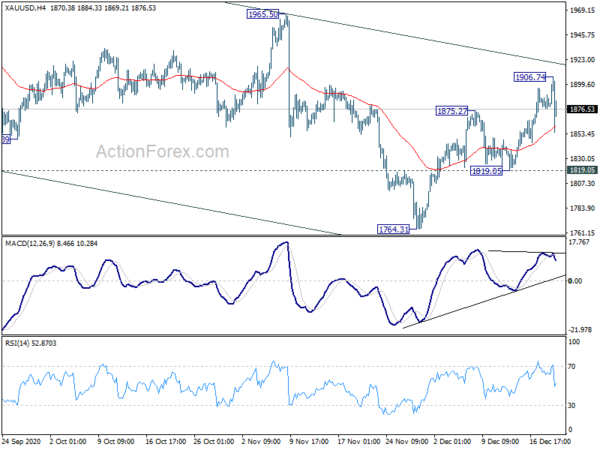 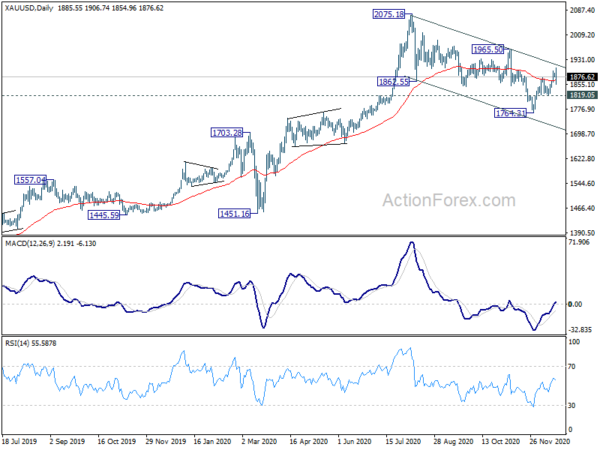 China’s PBoC left the one-year loan prime rate (LPR) unchanged at 3.85% today. The five-year LPR was held at 4.65%. These benchmark lending rates for corporate and household loans were kept unchanged for the eight straight months. Some economists saw that with the economic recovery on the right track, PBoC policy focus would gradually shift away from supporting growth. Keeping LPRs unchanged would provide the base for the central bank to hike its policy rates next year.

Offshore Yuan trades a little weaker today, mainly as dollar recovers. USD/CNH continues to consolidate above 6.4968 temporary low. Near term outlook stays bearish, with another fall expected, as long as 6.5968 resistance holds. USD/CNH could have a take on 61.8% retracement of 6.0153 to 7.1953 at 6.4661 before forming a bottom.

“Amid the coronavirus spread, the hardest part was that we had to strike a balance among preventing infections from spreading, revitalizing the economy and restoring fiscal health,” Finance Minister Taro Aso said. He added that it’s “regrettable” that bond dependency ratio would rise again.

AUD/USD’s break of 0.7507 support confirms short term topping at 0.7639, on bearish divergence condition in 4 hour MACD. That came after hitting 0.7635 long term fibonacci level. Intraday bias is back on the downside. Deeper pull back could be seen to 55 day EMA (now at 0.7338). On the upside, firm break of 0.7639 is now needed to confirm rally resumption. Otherwise, risk will stay mildly on the downside for more correction. 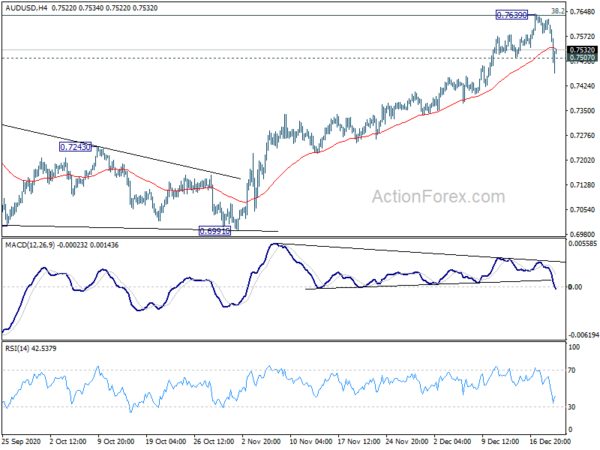 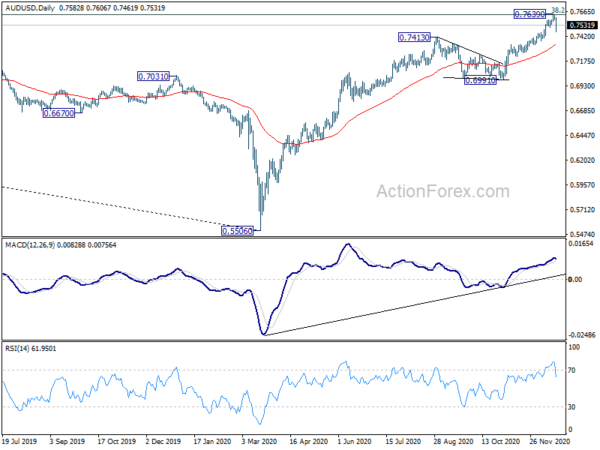