Dollar is back in selloff mode in early US session after slightly worse than expected jobless claims numbers. Though, at the time of writing, Yen underperforms mildly. On the other hand, buying focus is back on commodity currencies today. Australian Dollar is leading others higher. European majors are generally mixed. European indices are mixed for now while US futures point to just slightly higher top. Trading could be relatively subdued. 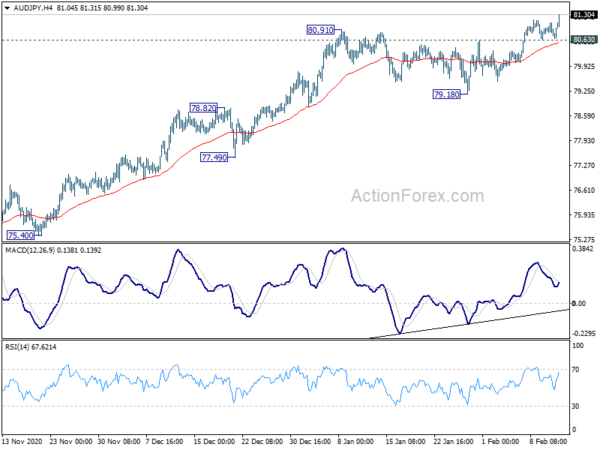 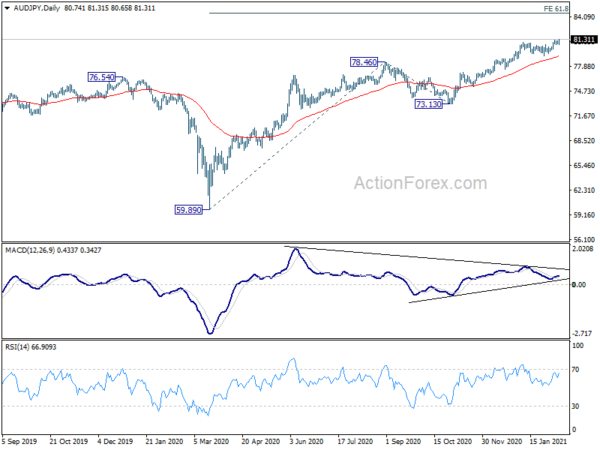 Eurozone and EU economies are now expected to reach pre-crisis levels “earlier than anticipated” in Autumn, “largely because of the stronger than expected growth momentum projected in the second half of 2021 and in 2022.”. Growth is “set to resume in the spring and gather momentum in the summer as vaccination programmes progress and containment measures gradually ease.” Inflation, however, is set to remain subdued.

Valdis Dombrovskis, Executive Vice-President for an Economy that Works for People said: “Today’s forecast provides real hope at a time of great uncertainty for us all. The solid expected pick-up of growth in the second half of this year shows very clearly that we are turning the corner in overcoming this crisis.”

Paolo Gentiloni, Commissioner for Economy said: “Europeans are living through challenging times. We remain in the painful grip of the pandemic, its social and economic consequences all too evident. Yet there is, at last, light at the end of the tunnel. As increasing numbers are vaccinated over the coming months, an easing of containment measures should allow for a strengthening rebound over the spring and summer.”

ECB Villeroy: Green central bank action is not about easing

ECB Governing Council member Francois Villeroy de Galhau said he proposed to “decarbonizing the ECB’s balance sheet with a pragmatic, progressive and targeted approach to all corporate assets whether they be held on the central bank’s balance sheet as purchases or taken as collateral.”

Villeroy noted that the stagflationary nature of climate change was the reason to take it into account. It could challenge the price stability mandate by pushing up prices while weighing on the economy.

Though, he also noted, “the greening of central bank action is not about additional monetary policy easing but recalibrating our tools”.

RBA Harper: Still plenty of excess capacity in the economy

RBA board member Ian Harper said there’s “still plenty of excess capacity in the economy”. The tendency for monetary stimulus to product an asset-price bubble is “way off where we’re presently headed”. Policymakers indeed wanted asset prices to be increasing to speed up investment. Harper added,  “the bank can continue to buy bonds for as long as it likes, there’s no obstacle to that.”

“The recent changes that the Fed made, well that was to bring them up to where we are basically,” he said. “We’ve never religiously or rigidly interpreted the timeframe over which we would seek the inflation rate to be within the target band.”

Intraday bias in EUR/USD remains on the upside for 1.2188 resistance. As noted before, corrective fall from 1.2348 should have completed with three waves down to 1.1951. Break of 1.2188 resistance will bring retest of 1.2348 high. On the downside, below 1.2087 minor support will dampen this bullish case and turn intraday bias neutral first. 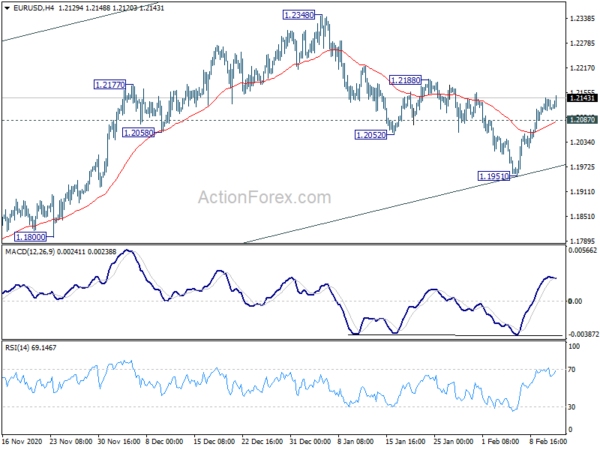 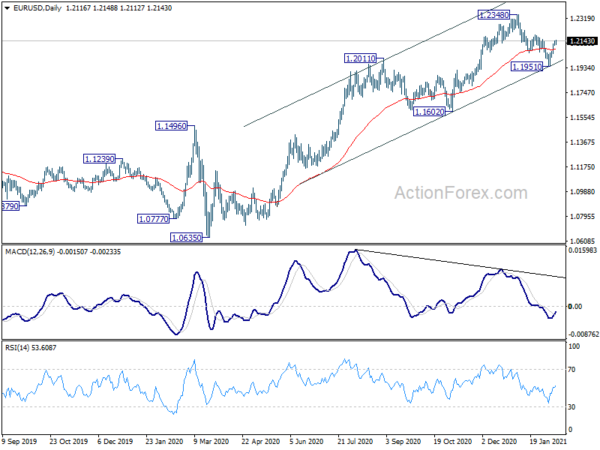