Yields Up, Stocks Down, Dollar and Yen Rebound

US stocks suffered steep selling overnight on sharp rally in treasury yields, and the selloff carried forward to Asian markets. Yen and Dollar ride on the turn in risk sentiments and rebounded, together with Dollar. Australian and New Zealand are in deep pull back, together with Sterling. Euro and Swiss Franc are mixed for the moment. 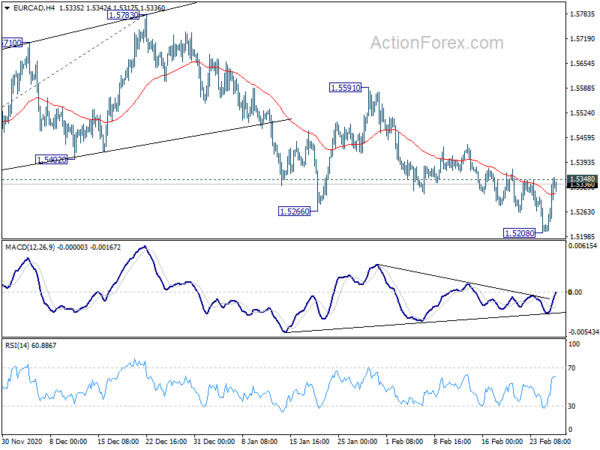 The fast acceleration in US yield was a major shocker to the markets overnight. Fed officials are generally unconcerned with recent rally. They even sounded upbeat about the development in the bond markets. But some analysts pointed to the poor demand in the “awful” bond auctions overnight. Now that 10-year yield is back above 1.5%, we might be looking at next level around 2%, if the the rally persists.

Kansas City Fed President Esther George said, “much of this increase likely reflects growing optimism in the strength of the recovery and could be viewed as an encouraging sign of increasing growth expectations.”

Atlanta Fed President Raphael Bostic said, “yields have definitely moved at the longer end, but right now I am not worried about that. We will keep an eye out. … I am not expecting that we will need to respond at this point in terms of our policy.”

St. Louis Fed President James Bullard said, “I think the rise in yields is probably a good sign so far because it does reflect better outlook for U.S. economic growth and inflation expectations which are closer to the committee’s inflation target,”

However, some analysts noted that the sharp rally in yield was a result of the “tepid”, awful”, and “brutal” debt auction. The USD 62B of 7-year notes auction showed poor demand, with bid-to-cover ratio of 2.04, the lowest on record.

S&P 500 and DOW not looking bad despite pull back, NASDAQ vulnerable though

While US stocks suffered steep selloff overnight, the outlook isn’t generally that bad yet. S&P 500 is still holding well inside rising channel, and above 55 day EMA. The trend defining support of 3694.12 is indeed still a bit far away. So, outlook is staying bullish, in a way that rise from 3233.94 is still not under threat yet, not to mention the up trend from 2191.86. Though, bearish divergence condition in daily MACD is a warning.

NASDAQ is looking a little bit more vulnerable as it has already tested corresponding trend defining support of 12985.05. Firm break there will open up the case of deeper pull back towards 12074.06 resistance turned support. That could be an early warning of deeper correction in other indices.

But at the same time, let’s not forget that DOW just made a new record high earlier this week. It’s holding well above 55 day EMA, as well as 29837.30 support. The bearish divergence condition in daily MACD is not enough to indicate major topping yet. So overall, it’s still early to declare the arrival of medium-term scale correction in US stocks. Let’s wait and see.

Intraday bias in AUD/USD is turned neutral with the current steep pull back. Some consolidations could be seen below 0.8006 and deeper fall cannot be ruled out. But outlook will stay bullish as long as 55 day EMA (now at 0.7669) holds. Up trend from 0.5506 is still in favor to continue and break of 0.8006 will target 0.8135 key long term resistance next. 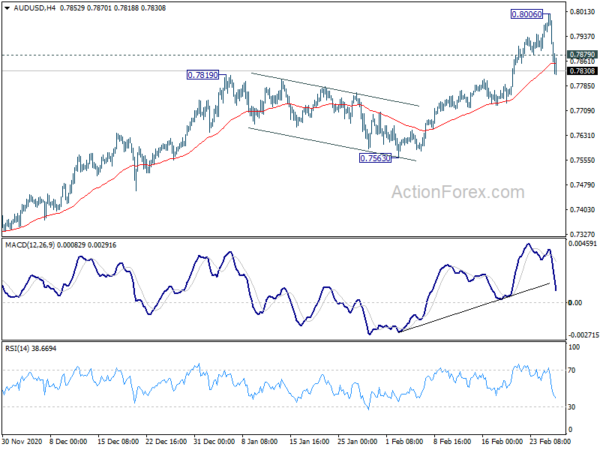 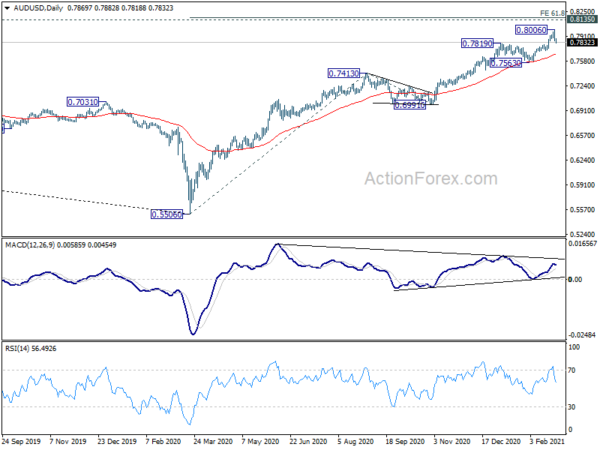