Fed Chair Jerome Powell’s lack of concrete hint on action against rising nominal rates sent treasury yield higher, and stocks lower overnight. Dollar rode on risk aversion and jumped sharply higher. Nevertheless, the greenback’s rally was concentrated against Euro, Swiss Franc and Yen only. Sterling, Canadian, and Australian are indeed still rather resilient. In particular, Canadian Dollar was support by resumption of oil price rally after OPEC rolled over production cuts. Now, focus will turn to non-farm payrolls from the US later in the day.

Technically, rises in USD/CHF and USD/JPY are both accelerating upwards. EUR/USD’s breach of 1.1951 support also suggests resumption of corrective fall from 1.2348 as expected. Attention is turned to other Dollar pairs. Levels to watch included 1.3828 support in GBP/USD, 0.7691 temporary low in AUD/USD and 1.2742 temporary top in USD/CAD. As long as these levels hold, Dollar’s rally is considered just “half-hearted”.

US treasury yields surged again while stocks tumbled overnight after Fed Chair Jerome Powell failed to provide any guidance on what Fed would do regarding recent sharp rise in long-term yields. That left markets wondering how far Fed would allow the yield curve to continue to steepen.

Powell noted that the climb in yield was “something that was notable and caught my attention”. He would be “concerned by disorderly conditions in markets or a persistent tightening in financial conditions that threatens the achievement of our goals”. Yet, Fed is looking at “a broad range of financial conditions,” rather than a single measure.

There were some speculations that Powell would hint on the possibility of an “Operation Twist” that concentrate on purchases on the longer-end. When asked about the topic, Powell just said “our current policy stance is appropriate”.

However, sustained break of 12074.06 will argue that NASDAQ is already correcting the whole up trend from 6631.42. That would open up the case of deeper medium term correction through 10822.57 support.

Similarly, even though S&P 500 looks vulnerable for a deeper pull back, we’d expect strong support from 3588.11 to contain downside to bring rebound. But sustained break there would indicate the start of a deeper correction to the whole up trend from 2191.86.

OPEC+ agreed to largely roll over production cuts to the month of April, as announced yesterday. Russia and Kazakhstan were granted exemptions to increase their output by a small amount of 130k and 20k respectively.

At a press conference, Saudi energy minister Abdulaziz Bin Salman said the “jury is still out” on the future of the oil market. “When you have this unpredictability and uncertainty, I think there are choices you could make. I belong to the school of being conservative and taking things in a more precautionary way.

WTI crude oil resumed recent up trend by breaking through 63.70 resistance to as high as 64.71 so far. Next is key structural resistance at 65.43. We’d look for topping signal around this key resistance level. Break of 59.17 support would finally bring a long-overdue correction. Yet, firm break of 65.43 would extend the upstoppable up trend to next key resistance at 76.75 (2018 high). 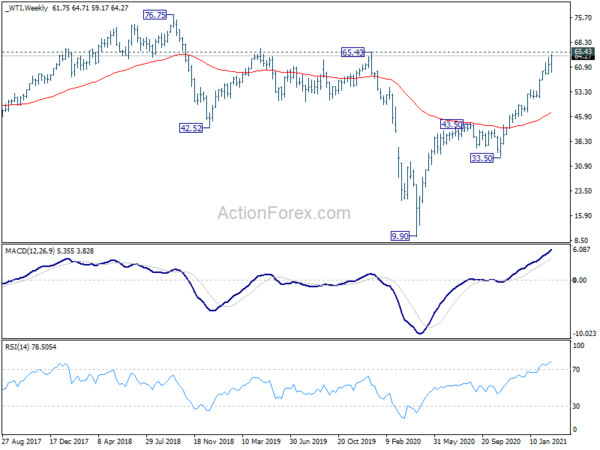 BoJ Governor Haruhiko Kuroda told the parliament today that “it’s important to keep the yield curve stably low for the time being.” The central bank allows 10-year JGB yield to move inside a band around 0% to “enhance bond market functions”. But given recent surge in yields, “much more debate” was needed before deciding to widen the band.

“It’s a difficult decision,” Kuroda said, “the economy remains under pressure from the COVID-19 pandemic.”

“We have been and must continue to buy ETFs flexibly,” he said. “We’ll discuss at the March review how specifically we could make our purchases more nimble”.

Ai Group Chief Executive, Innes Willox, said: ” While the continued improvement in conditions is heartening, employment fell in February following a strong recovery in the preceding months. Employers and employees will be hoping that the further growth in new orders recorded in February signals the continued recovery of sales and employment over the next few months.” 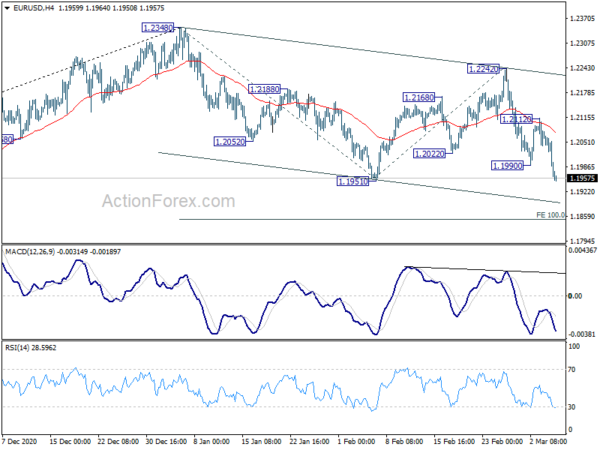