Selloff in Asia Intensifies, Aussie and Kiwi Accelerate Down 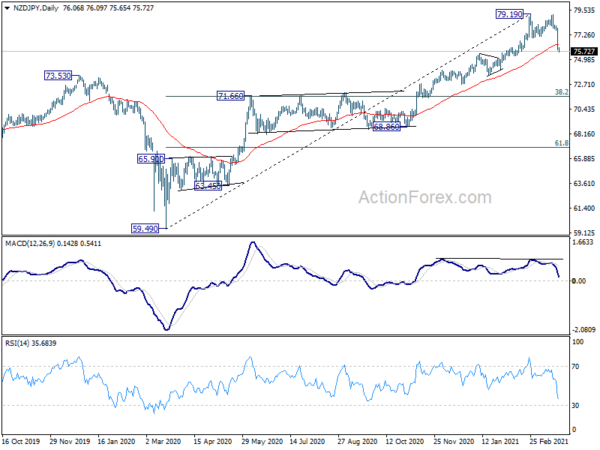 Fed Governor Lael Brainard said in a speech that the FOMC’s current approach implies “resolute patience while the gap closes between current conditions and the maximum-employment and average inflation outcomes in the guidance.”

The “preemptive approach” calls for reduction of accommodation when unemployment rate nears the estimated neutral rate, in anticipation of higher inflation risks. But the current “patient” approach enables “the labor market to continue to improve and inflation expectations to become re-anchored at 2 percent.”

While outlook has “brightened considerably”, the economy remains “far from our goals” with jobs nearly 10 million below pre-COVID level, and inflation persistently below 2%. “It will take some time to achieve substantial further progress,” she added.

Fed Bullard: Continuing to see interest rate near zero through 2023

St. Louis Fed President James Bullard said yesterday that right now “it is looking good” as “we are coming to the end of the war here” with the pandemic. He forecast US GDP to grow 6.5% this year, while unemployment rate will fall to 4.5%. He also expects inflation to climb to 2.5%.

But, “I’d like to see actual data come in that verifies this forecast and verifies the idea that it’s going to be a very strong year for the U.S. economy,” he added. “We are still in a crisis. It could go the wrong way. So we really want to get the pandemic behind us before we start contemplating changes.”

“I am continuing to see us near zero (on interest rate) through 2023,” Bullard said.

BoC Deputy Governor Toni Gravelle reiterated in a speech that as the policymakers “continue to gain confidence in the strength of the recovery”, the central bank will “gradually adjust the pace of our QE purchases”. There will be a new full economic projection at the April policy decision.

But Gravelle also emphasized, “moderating the pace of purchases while adding to our holdings would simply mean that we are still adding stimulus through QE but at a slower pace. It would not mean we are removing stimulus. We would be easing our foot off the accelerator, not hitting the brakes.

Even at the point where the bond holdings are “largely stable”, he said, “the accumulated amount of GoC bond holdings would still represent a significant amount of stimulus in the system.

BoK Lee: Growth trend likely to be stronger than projected

Bank of Korea Governor Lee Ju-yeol said “the trend of growth is likely to be stronger than previously projected.” Nevertheless, “because real economic activity hasn’t returned to its potential level, and as the economy isn’t fully back on its feet from the shocks of COVID-19, our assessment is that the situation doesn’t warrant adjustments in policy stance.”

“It would be an important task to prepare in advance how we should normalize easing measures taken until now in an orderly fashion, if growth and inflation conditions improve,” Lee said.

Usamah Bhatti, Economist at IHS Markit, said: “Activity at Japanese private sector businesses remained subdued… one positive note was private sector firms in Japan recording the strongest increase in employment levels since January 2020… private sector companies were optimistic that business conditions would improve in the year ahead… Positive sentiment stemmed from the expectation that the lifting of state of emergency measures and broader restrictions as vaccinations roll out would trigger a recovery in demand in both domestic and external markets.”

Australia PMI composite rose to 56.2, rounds off a strong quarter, but inflation a concern

Pollyanna De Lima, Economics Associate Director at IHS Markit, said: “The latest results rounded off a strong quarter for the private sector, the best since the second quarter of 2017… Inflation remains an area of concern, with March data showing the strongest rise in input costs in the survey history…. Supply-chain disruption was cited by panellists as the main driver of inflation, a factor that also restricted business optimism towards growth prospects.”

The economic calendar is rather busy today. UK CPI and PPI, PMIs will be featured in European session. Eurozone will also release PMIs. US will release durable goods orders later in the day, with PMIs and oil inventories too. 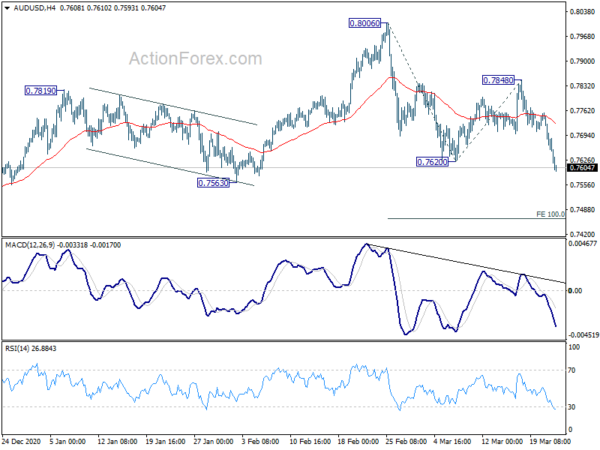 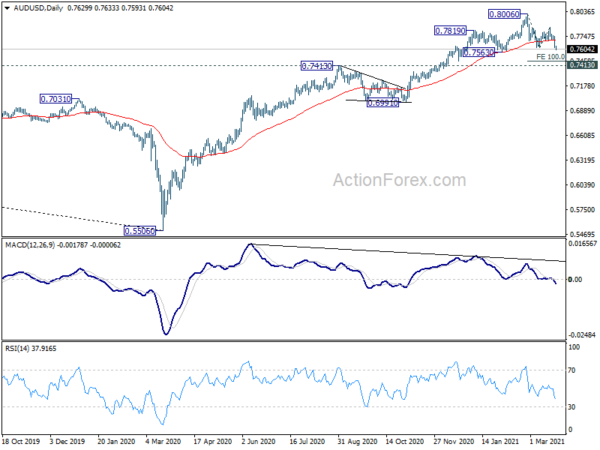