Dollar remains generally pressured in Asian session, as selling appeared to have taken off overnight. J&J’s vaccine saga is raising some concerns that it would take longer for US to achieve herd immunity. Or, at least, it’s not brightening the outlook. On the other hand, New Zealand Dollar jumps broadly after RBNZ rate decision, taking Australian Dollar higher today. The trans-Tasman travel bubble between the two countries to start on April 19 provides some optimism to both consumers and service industries.

Technically, Dollar’s decline is gathering momentum. A major focus is on 1.1988 resistance in EUR/USD. Firm break there will affirm the case that correction from 1.2348 has completed at 1.1703. Break of 0.7676 minor resistance in AUD/USD will resume the rebound from 0.7530 and align the outlook with EUR/USD too. We’d also have a look at 1755.29 resistance in Gold. Break of the level will indicate near term bullish reversal in Gold, and double confirm Dollar’s weakness. 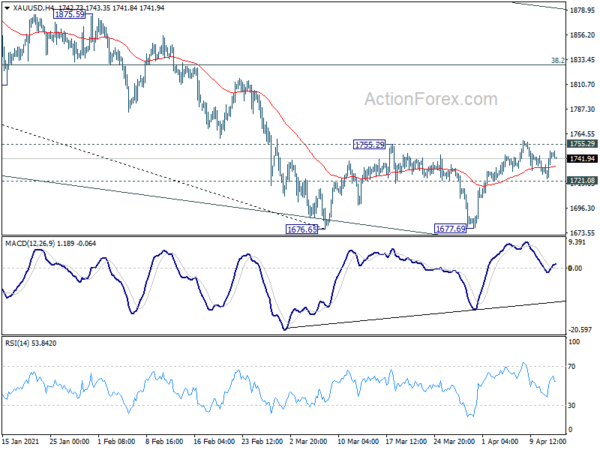 RBNZ left stimulatory monetary policy unchanged as widely expected, with OCR at 0.25% and Large Scale Asset Purchase and Funding for Lending program unchanged. It maintained that to meet the requirements of sustainable 2% inflation and maximum employment will “necessitate considerable time and patience”. The committee is also “prepared to lower the OCR if required”.

The medium-term growth outlook was “similar” to the scenario presented in the February statement. Outlook remains “highly uncertain, determined in large part by both health-related restrictions, and business and consumer confidence.” The would be some temporary factors for near-term price pressures, including global supply chain disruptions and higher oil prices. But medium-term inflation and employment will “likely remain below its remit targets in the absence of prolonged monetary stimulus.” 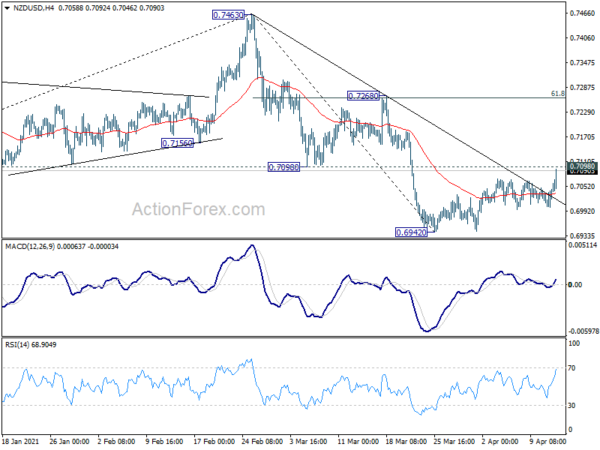 Developments in AUD/NZD suggests that NZD might be having some strength of its own. Focus remains on 1.0798 support. Break there will indicate near term bearish reversal. That would extend the decline from 1.0944 to 1.0637 support and possibly below. Nevertheless, rebound from the current level would suggests that larger rise is not completed, and turn focus back to 1.0944 high. 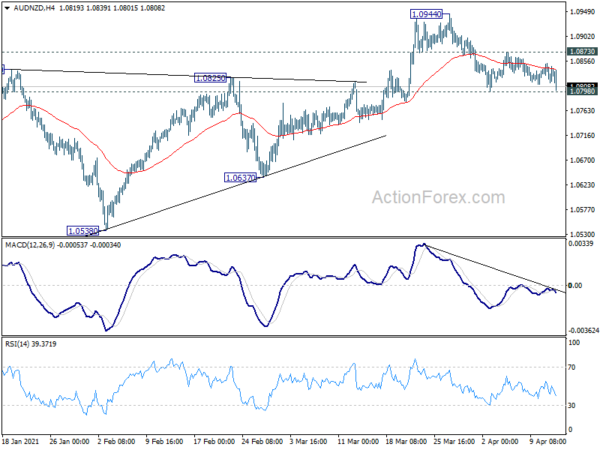 Australia Westpac consumer sentiment rose 6.2% to 118.8 in April, up from 111.8. it’s the highest level since August 2010, “when the Australia’s post-GFC rebound and mining boom were in full swing”. The survey continues to signal that “consumer will be the key driver of above-trend growth in 2021”.

Westpac expects RBA to maintain currency policy settings on May 4. Markets will focus on the new economic projections to be released with the SoMP on May 7. Overall, the forecasts would be consistent with the policy guidance that, “it will still be some time – 2024 at the earliest – before the Bank expects to achieve its full employment and inflation targets.”

Fed Harker: No reason to withdraw support yet

Philadelphia Fed Bank President Patrick Harker said, “Fed policy is going to hold steady”. He added, “while the economic situation is improving, recovery is still in its early stages, and there’s no reason to withdraw support yet.” He also noted that “we’re not seeing inflation running out of control.” Instead, he’d be more concerned with inflation that is too low.

Boston Fed President Eric Rosengren told WSJ that he’s expecting a “very strong economy over the course of this year”, and unemployment to “get quite low by the end of the year.” But he’s not giving a specific forecast about where the rate liftoff to be, as there’s no such foresight in the only post-war pandemic. “I think we’re two years away from when that likely is going to become a much more important question,” he said.

Japan machinery orders dropped -8.5% mom in February, much worse than expectation of 2.8% mom rise. That’s also the second straight month of decline, and worst since April 2020. The data raised concerns that business investment was brought to an abrupt halt in Q1. Though, recovery is still expected in Q2 and onwards. 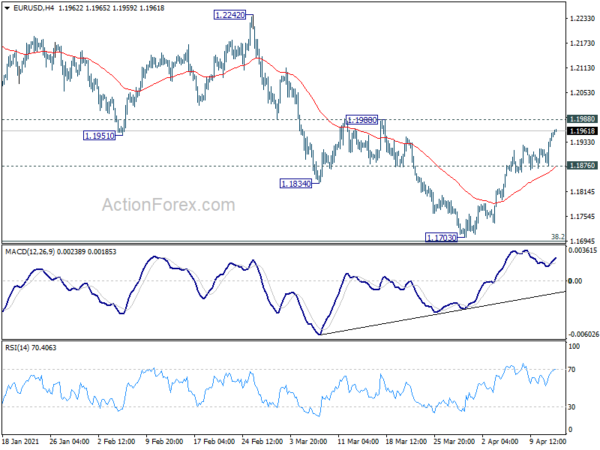 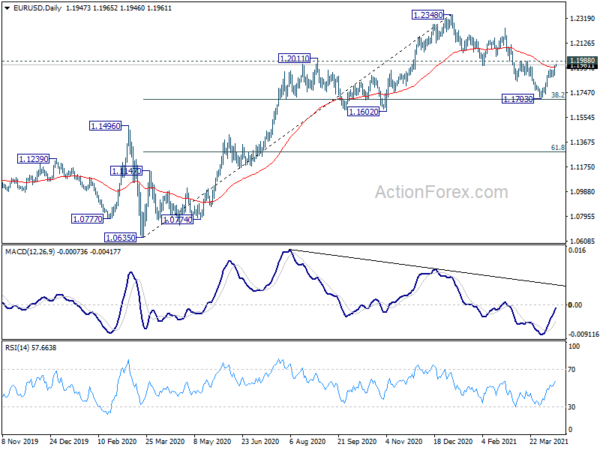